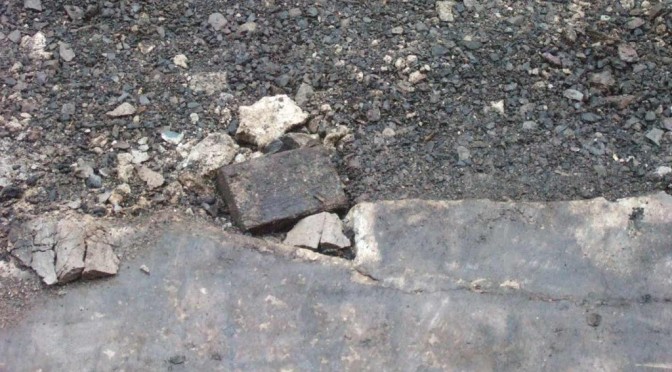 Last Saturday I was walking along Whitehall Crescent, Dundee, and I noticed that the street was completely coned and barricaded off, except for the pavements. The tarmac was up, and the entire street under the tarmac was made of wooden blocks stood on end, like parquet flooring. There was a flat concrete base layer, then a later of wooden blocks perhaps 8 inches tall, and perhaps 8 by 5, arranged brick-fashion. Some were looking a bit fibrous and rotten, some were looking rock-solid. Some had been dug out and left in a big pile. Where the tarmac layer was still on it was only about one inch thick, laid directly on top of the wood.

Unfortuntely I didn’t have my camera to record this scene. Yesterday, I took my camera in. Unfortunately all of the wood blocks had been removed, and half of the road was already tarmacked over on top of the concrete base layer. But I was able to photograph one lone block, and an area of blocks which survived in a corner, buried under rubble. Also the general view shows the impression of the wooden blocks on the concrete.

Karen Loomis sent me the following links which give a history of wood-block road making. I was amazed to find one surviving in the centre of Dundee, still in use though hidden. I thought it was a shame that it is no more, that it has been taken up. 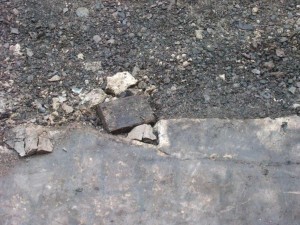 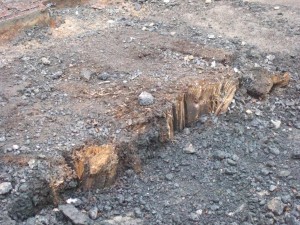 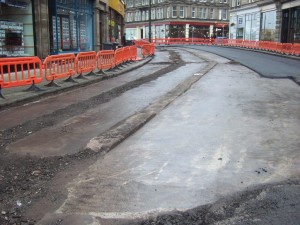 One thought on “Wooden road”