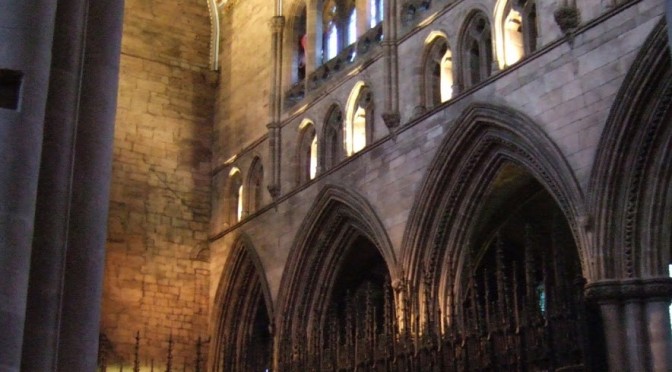 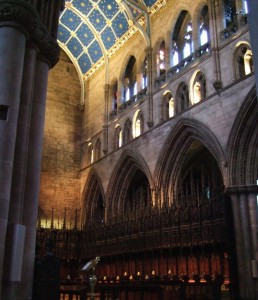 Music is seen at different times and by different people in different cultures as different things. Working so intensely with the ancient Northern European traditions, I am more and more interested in the idea of music as architecture.

In earlier medieval and back through to classical times, music was seen as part of the quadrivium, the four mathematical or scientific subjects that formed the major part of a liberal education. The placing of music as a mathematical discipline alongside geometry, astronomy and arithmetic highlights the importance of number, ratio, and structural understanding in the ancient conception of what music truly was.

Vitruvius in his treatise points out how architecture depends on many other subjects, including geometry and music, to provide its essential numeric and structural grounding. But interestingly, he also says that an architect needs to know other subjects such as law, more humane subjects that we would now associate more with the emotional and expressive needs of musical creativity. I would think that this gives us a clue as to how music and architecture are related.

I see both as being first and foremost arts which create formal public spaces, which provide an environment for a person to be in. And being created environments, both a building and a musical performance are expected to be artificial, displaying their artifice, rather than natural and organic. Hence the rigid squareness and geometric layout of formal buildings. Yet, as Vitruvious is keen to point out, architecture must be rooted in natural forms, but I think this is more concerned with the supposedly natural nature of simple harmonic numbers, which are also found as the basis of ancient musical thought, scales and tunings.

I have often held up Caniad San Silin as a great example of a piece of medieval music that is gloriously architectural in its form. With 12 major divisions, grouped into four sets of three, each division having three sections, each section having four phrases, and with the four-fold sonorities of I O I I repeating, fractal-like, at every level, the conceptual basis of this music seems to me to be less like the intricate winding of an early medieval carpet page from one of the illuminated gospel books, and more like a cathedral (see the photo above of Carlisle cathedral, with its superimposed rows of arches upon arches from the wooden choir stalls up to the gilded ceiling).

So, if this kind of music is considered in architectural terms, what principles can we consider to help with performance and creativity? Well, one thing that seems interesting is the idea of a building having multiple uses and functions. It has to be formally beautiful and well proportioned, so as to be appreciated in detail as an art object, withstanding and rewarding close and intense scrutiny. But it also has to be a practical place for humans to be in whilst they do other business, in other words it has to provide a discreet, ergonomic ambience. This to my mind parallels music’s dual function as a focussed and concentrated art form as well as providing a background hum for distracted activity.

The other thing that buildings have to have, according to Vitruvius, is permanence, continuing solidity through time. Now this is the exact opposite of music, which by its very nature emphasises the transience of time and experience. But I am wondering if a single, unique musical performance can somehow express that timeless permanence through the memories of the people who listened to it. And if it can, does the concept of a “piece” of music have any part to play in this, or is it a hinderance instead?

One thought on “Music as architecture”