When I was in the National Museum of Scotland earlier this month, I was looking at the Queen Mary harp, and I noticed the wear on the lower back left corner of the soundbox. The corner of the box is quite worn away, and there is a wooden patch nailed on to the back of the box at this point, an old repair.

The wear on this corner was mentioned and drawn by R.B. Armstrong in his book The Irish and the Highland harps (David Douglas, 1904), though he talks mostly about sliding the harp along the floor when it was put down, Keith Sanger and Alison Kinnaird in their book Tree of Strings (Kinmor 1999), p.57 repeat Armstrong’s observations. Karen Loomis in her MMus dissertation (University of Edinburgh, 2010), p.49, includes a photo and a mention of this wear, but she is mostly concerned with the cracks from the repair patch nails.

I realised that the shape of this worn area is not just caused by general sliding of the harp, but instead it forms a flat surface which seems to me to be where the harp was stood on this corner when it was being played. You can see in my photo how the flat worn patch lines up with the projecting block of the bottom of the soundbox: 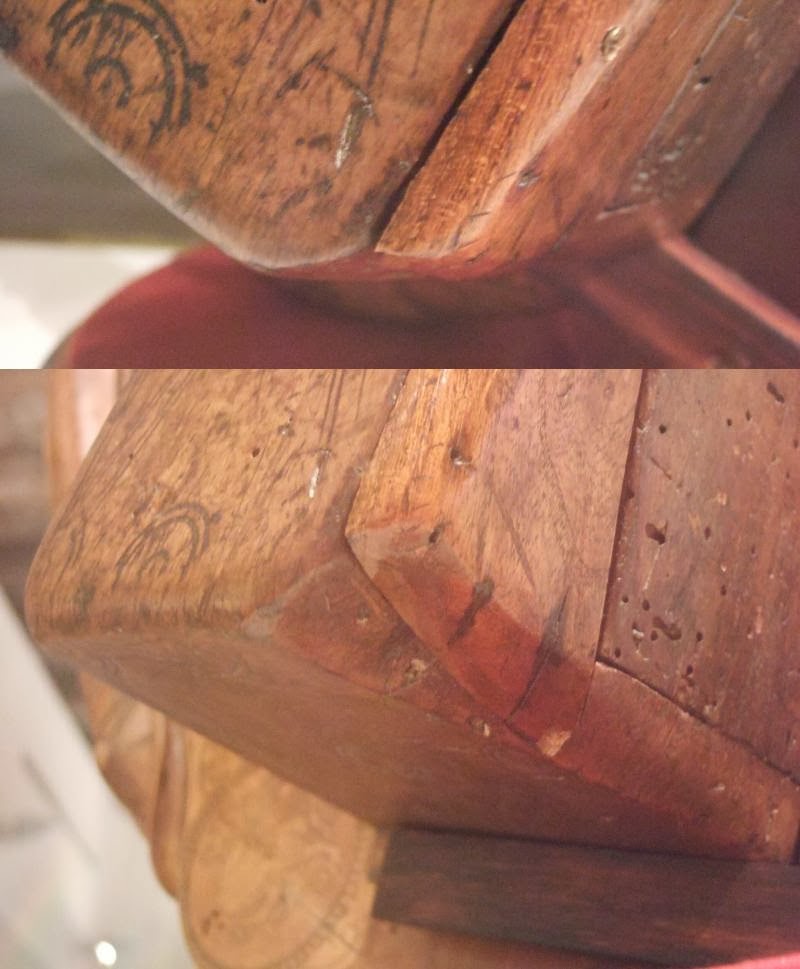 A long time ago I realised that if you sit on the floor to play a replica of the Queen Mary harp, then the harp naturally tips to rest on its projecting block and also this corner of the soundbox.

The angle of the flat panel therefore gives us a quite precise evidence for the angle that the harp was held at. 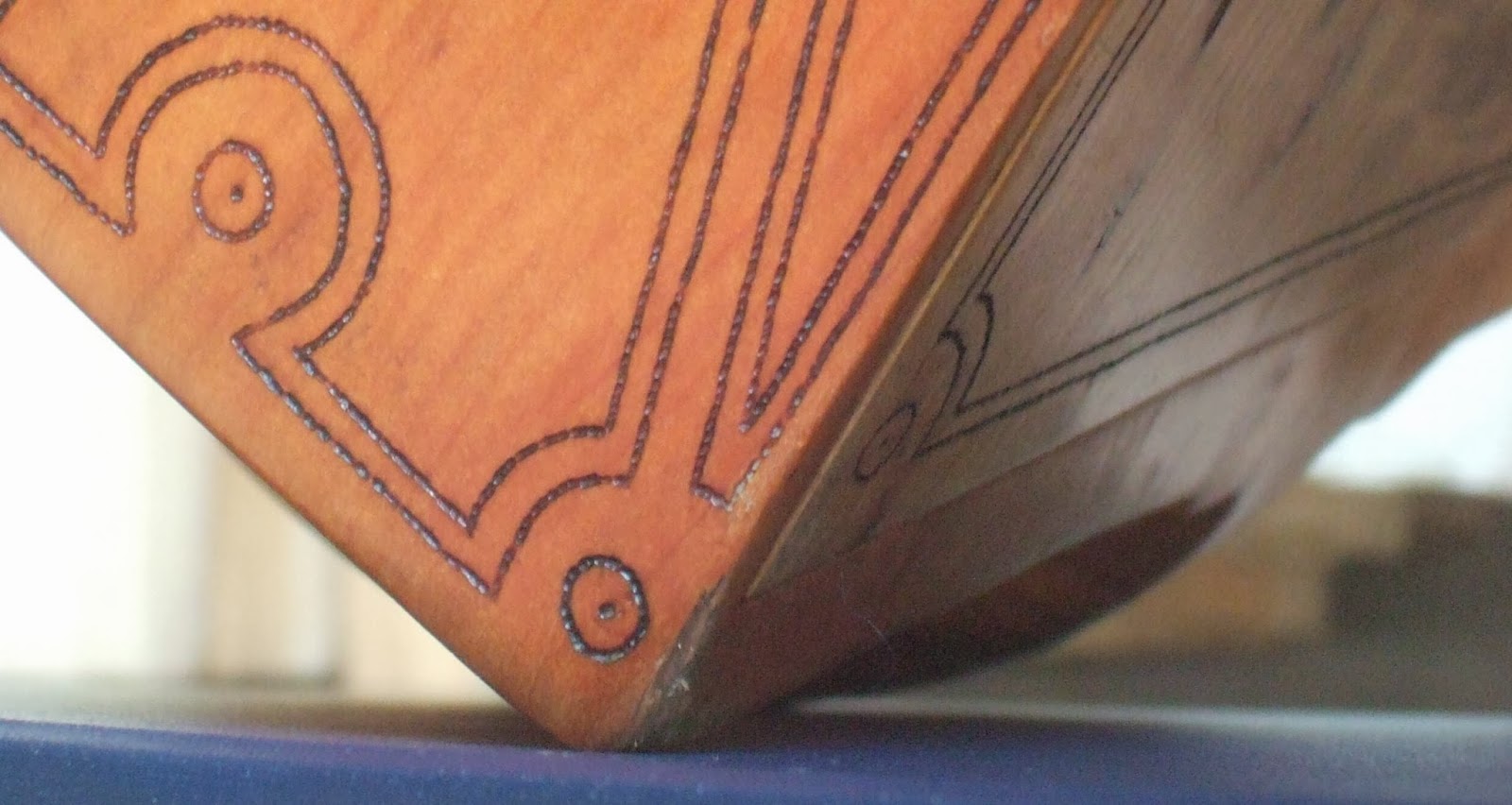 And then, without moving the harp at all, I photographed the orientation of the harp, from floor level, at right angles to the plane of the strings, and also in line with it: 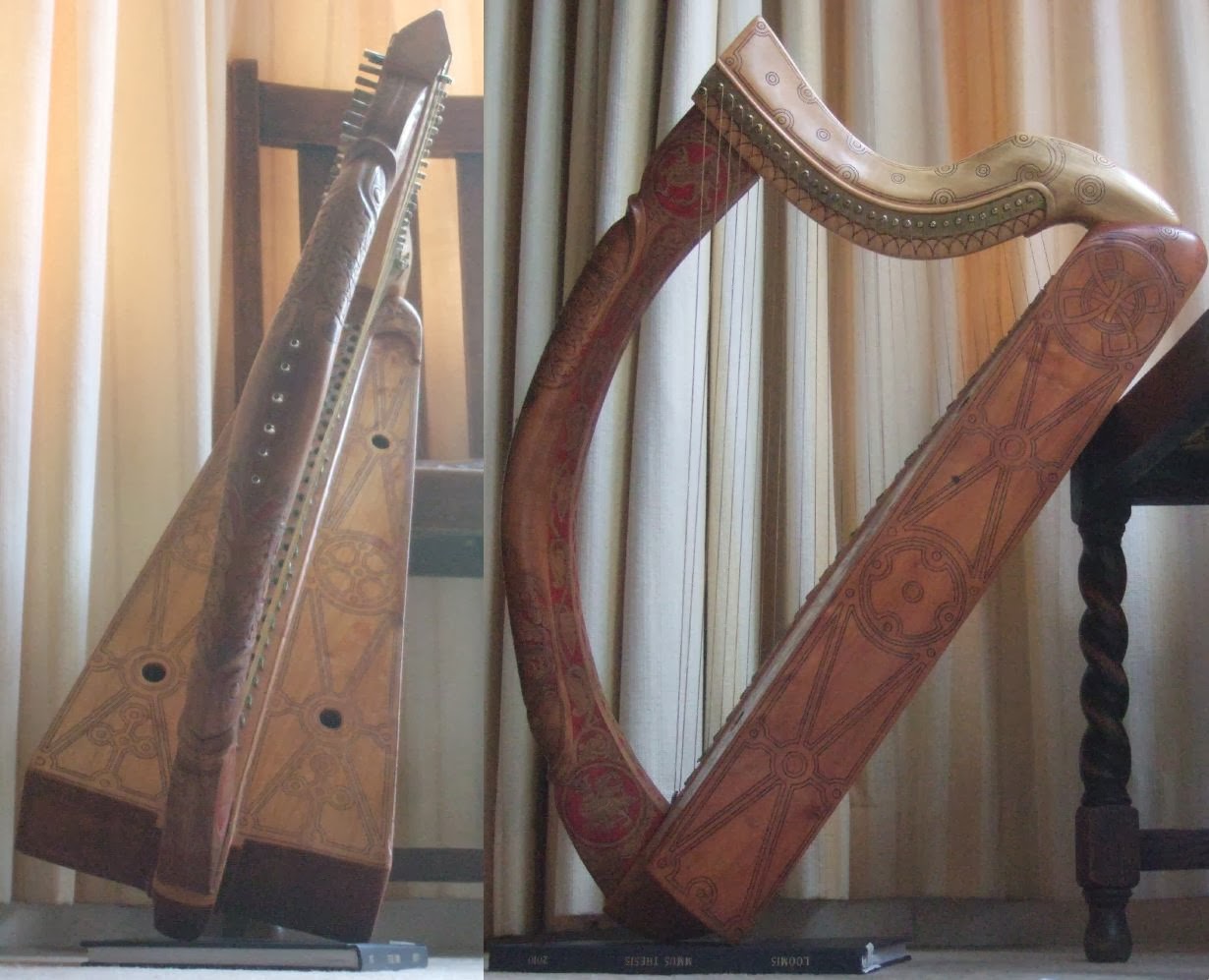 I think this gives a fair estimation of how the Queen Mary harp was positioned when it was being played.

Obviously there is some margin for error; the bottom of the projecting block would wear away and the corner of the box would wear away, so the angle in the front view would change over time. Also the flat worn surface is not entirely flat, but curves up towards the replacement piece. My positioning of the harp matches the most upright position. I would estimate that there could be 5 degrees either way since I was just doing this all by eye. The curving probably represents the harp being slid down to rest on its back as Armstrong suggests.

You’ll see that the strings are pretty much upright in the side-view photo.

The harp rests back quite a way behind its balance point. My replica won’t balance on that line between the box corner and the projecting block – if you tip it far forward enough to balance, it falls over sideways.

I looked again at Paul Mullarkey’s photos of the Trinity College harp. The soundbox is much more eaten away than the Queen Mary’s, especially at the bottom. However, the back bottom right corner of both the soundbox and the back panel are preserved, whereas the back bottom left corner is completely gone and is replaced now with extensive resin filler.