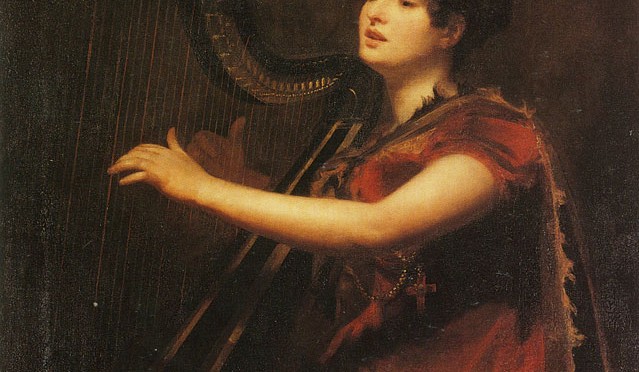 On Thursday morning I have to give a lecture on the harp traditions in Scotland, as part of the MU2002 Scottish Music undergraduate course.

It is pretty difficult to summarise all aspects of the harp in Scottish music in just 50 minutes!

Obviously I take in the replica Queen Mary harp to show and play a tune. In the past I have handed out facsimiles of the music source to show them the nature of the source and how the reconstructed performance relates to it; we discuss the scientific study of the historic instruments, and the other evidence for the early Gaelic harp tradition such as depictions and descriptions, and correlate that with the wider social and political scene.

In the spring of this year when I presented the same lecture I tried to engage more as well with the diversity of harp traditions in Scotland. Naturally I have a bias in knowledge and interest in the historical Gaelic harp traditions. Counting or listing the different traditions is fraught with difficulty, depending where you draw the lines. For example, you could list the historical Gaelic harp traditions down to c.1750, the revival Gaelic harp traditions which I am part of , the revival lever harp traditions from 1890 on. The wire-strung folk harp movement could well be considered a seperate tradition of its own, with a distinctive type of instrument design and a distinctive playing style and idiom. There is also the question of whether we should consider overseas development, though I would argue perhaps that performers in America or on the Continent are not part of Scottish music – in the same way that self-identified Scots living abroad were not eligible to vote in the referendum.

Thinking of the interest in reviving the ancient Gaelic harp music after it disappeared in the mid 18th century, it struck me that there was a series of different approaches to this. The first was on the pedal harp, exemplified by the MacLean-Clephane sisters in Mull in the early 1800s. They were seriously interested in discovering, collecting and performing the old Gaelic harp music but their instrument was simply “the harp” – I doubt it occurred to them that there was any other kind of harp that they might have used. To us the use of a pedal harp to play the historical native repertory seems a little silly, but that says more about us and our preconceptions than it does about them I think.

It fascinates me to consider these people with their big pedal harps as in a direct line of cultural continuity to the work we are doing today. There is a problem in the scene in Ireland, with lever-harp players talking as if their tradition is the direct inheritor of the early Irish harp tradition, and quietly glossing over the total disjunct between the end of the early Irish harp tradition and the invention of the neo-Irish harp tradition. But I think it is also possible to go too far the other way, and to deny any connection at all. I think it is more useful to highlight both the continuities and the differences. The differences are huge; the modern lever harp, the modern miniature wire-strung harp, and the modern pedal harp, are all worlds away from the historical museum instruments in their design, setup and playing style, and  the musicians playing them all have very different ideas on the nature of the tradition, which elements are important and which are incidental, but the core interest in the cultural symbolism and the ancient archetype give a continuity and a thread of connection between all of these different approaches.