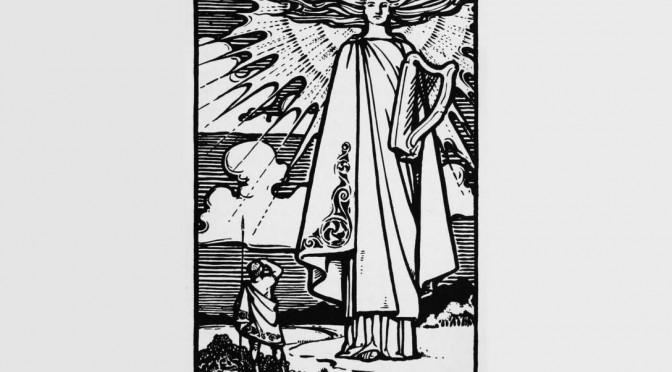 The text is from a medieval story, Forbhais Droma Damhghaire (The Siege of Knocklong), and Eugene O’Curry (Manners and Customs of the Ancient Irish, vol 3, p.362) transcribes the relevant section from manuscript and translates it as follows:

There appeared to me, upon the brow of Temair / A splendid youth of noble mien / More beautiful than all beauty was his form / And his dress ornamented with gold.

A wand with melody of music sweet an hundred fold / Over it [the Timpan] were two birds / And the birds, no silly mode, / Used to be playing upon it.

He sat beside me in pleasant fashion / He played for me his delicious sweet music / He prophesied most powerfully then, / That which was intoxication to my mind

The third verse here is the most difficult, and also the most intruiging. It seems to be describing the manner of his playing on the tiompán, but the translation as given is not very satisfactory. You can check on the manuscript facsimile at ISOS (you need to click through to f168r and look towards the bottom of the right hand column). The words are quite abbreviated and so there is some scope for alternative expansion and spacings.

The key words include fleasc, (O’Curry missed out the c), often translated as “a wand”. Ann Buckley went further and translated gu cairche as “of hair”. This leads to her theory, expounded in her article “What was the Tiompán?”, in Jahrbuch fur Musikalische Volks – und Volkerkunde, vol ix, 1978, that Tiompán refers to a bowed instrument.

However I am sure that Buckley is pushing things far too far here; in some unpublished notes, the eminent Celtic scholar Alan Bruford suggested instead an interpretation of these words as referring to a more impressioninstic use of technical music terms, to describe playing techniques and variation forms.

Actually I get a little bored after a while of this kind of super-pedantic analysis. The text we are looking at is a deeply mythical and allegorical story, telling of the High King, Cormac, travelling from Tara down into Munster to exact illegal taxes from the people there. This passage is a vision of the god Aonghus, materialising at the royal palace of Tara in front of the King in some kind of dream or vision, playing otherworldly music on his stringed instrument, and prophecising to the King. I don’t think we need to take the words used in too dull and literal a sense. The author is using piles of loaded words for atmospheric, dramatic and allusory impact.  Perhaps we would do better to be like Cormac, standing in awe of this radiant immanation from the gods, marvelling at the incredibly rich appearance and imagining the sound of his faery music.

The picture is from an early 20th century Irish magazine, sent to me by Terry Moylan. I am not sure what it is meant to show, but to me it looks very much like it may be Aonghus appearing in front of King Cormac!