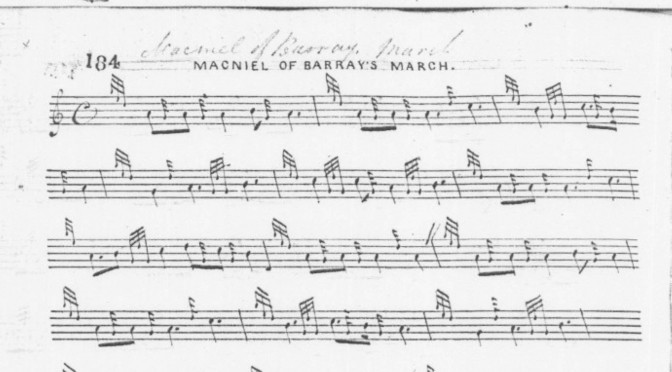 I am going to play the replica Queen Mary harp in Kisimul Castle on Barra in the Autumn, and so I thought I should get a MacNeil of Barra tune up and running. I am finding it a great challenge to get MacNeil of Barra’s March working on the harp.

Actually there are two tunes which attract the title Spaidearachd or Spaidsearachd Bharraigh. There is confusion with the words here; According to Dwelly, Spaisdearachd means “walking”, and Spadaireachd means “boasting”. The titles are Englished as “The Pride of Barra” and “MacNeil of Barra’s March”.

The more common tune is PS 084.  There are performances of this tune on the pipes on Youtube, e.g. by Willie McCallum. The waulking song “A’ Bhradag Dhubh” is related to this melody. There are some interesting archive recordings on Tobar an Dualchais, e.g. Kate MacDonald in1956 and Annie Johnson in 1938. The waulking song is a flyting between MacNeil & Clanranald poets which would fit with the “boasting” interpretation of the spaidearachd title. Both Marjory Kennedy Fraser (Songs of the Hebrides v1 p3) and Annie Johnson suggest the song dates from the time of Ruairi MacNeill 35th of Barra in the early 17th century.

I haven’t tried working on this tune yet; I may at some point.

I am currently working on the other tune, PS 008.  Donald MacDonald’s manuscript setting c.1826 is my image above; I have also been looking at the Colin Campbell cannteraichd manuscript of c.1797. They agree pretty well; Donald MacDonald misses one eighth of the variations, but that’s about it. Donald MacDonald sets the tune in 4/4 time, whereas the later sources I have looked at put it in 3/4 time – in a number of bars Donald writes awkward dotted crotchets to pad out the bar, and it seems to me like it does sit better with three pulses per bar.

Here’s my MIDI realisation of the urlar of Donald MacDonald’s setting:

The high section (3rd quarter and the first half of 4th quarter) is the hardest to understand – later manuscripts following Angus MacKay in the 1840s seem to mess this part up, but I am reassured by the way both pre-1840 sources follow the same melodic shape. Colin Campbell groups the notes differently to Donald MacDonald and I am trying to understand an appropriate phrasing and expression for this section. It reminds me of some harp tunes which have a kind of “minor” sonority in the middle, centred on the 6th of the usual scale. Cumha Bharúin Loch Mór (Scott’s Lamentation) would be a typical example.

I don’t know how old PS 008 might be. It doesn’t have that austere geometric construction that I usually associate with possible medieval tunes, but perhaps I am being too narrow-minded there. If anything, PS 084 is more geometric than PS 008.

One thought on “MacNeil of Barra’s March”