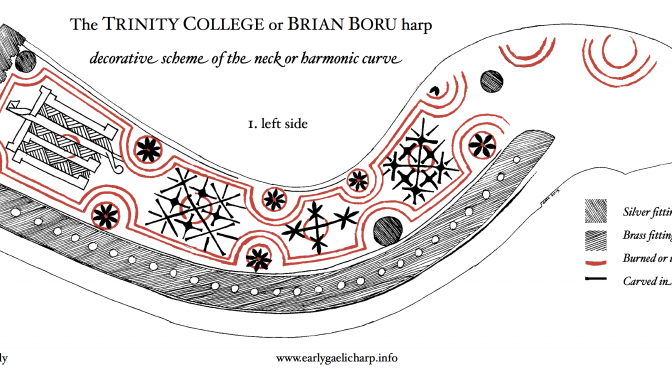 I am halfway through preparing a sheet, laying out the decorative scheme of the neck of the Trinity College harp.

I thought of doing this two years ago, when I did my scheme for the pillar, but I never got round to it until now.

I will eventually put both the halves together in one sheet, and publish it on Early Gaelic Harp Info, but for now you can get a sneak preview of the left side.

I like doing this kind of work because it gives me new insights into the thing. It is clear how there are two layers of decoration here – the original burned or impressed lines and circles, and the later carved intaglio work which partly obliterates the older lines. There is also the metal fittings which may be later again – I have ignored these on my chart.

It’s also clear how the treble end of the neck has been cut down – the burned lines and circles just tail off, as do the incised lines above and below the cheekband.

Next up: the right hand side…

Many thanks to Digital Resources and Imaging Services, Trinity College Dublin, for supplying copies of Dr. Paul Mullarkey’s photographs of the harp.