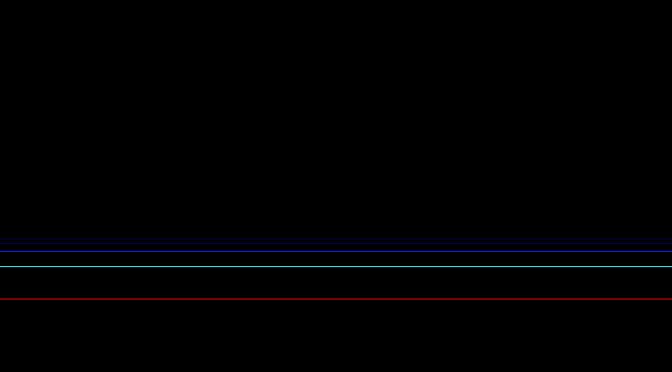 I am listening to last night’s BBC broadcast of The Well-Tuned Piano by La Monte Young. This fascinating five hour performance has prompted many thoughts and half-baked ideas on the nature of this kind of music.

The BBC’s notes describe this as an “epic piano solo”. The “live recording” features the “composer”, who “performs on a specially-tuned piano”. It’s not clear to me how we define “composition” or “performance” in this kind of artwork. I can’t imagine a traditional score for this kind of work – is it really scored with every note written out? Or is it more a kind of improvisation? Are there overall themes, are there rules or structures guiding the insanely fast repetitve percussive sections?

Is anyone else apart from the composer able to perform this “composition”? Is the magenta lighting and white rug (sadly absent here) a necessary part of the live performance or an affectational extra? Could someone else make an “arrangement” of it?

The tuning of the piano is also not entirely clear to me from the recording. Max Reinhardt, in his opening commentary, mentioned it being tuned in a just intonation; I thought I was hearing some adjacent notes tuned a comma apart, but it is hard to separate out the different tones because a lot of the time we are presented with what I think of as synthetic timbres; where chords blend to create not a polyphonic texture of more than one voice, but  a combined voice with new and startling timbral qualities. I think this is what creates the strange illusory sounds mentioned in the notes, and I was certainly hearing combination-tone type sounds, and strange timbral effects. These stir thoughts of spectral composing, though I am not sure that is intended or even under control here.

I started to analyse this as being in a neutral pentatonic D mode, though I may have missed other tones – I have been reading and also leaving the room on occasion, and I am trying to appreciate it as impressionistic art rather than make a technical analysis all the time.

Quite by coincidence I came across Howarth Hodgkinson’s new recording of part one of his composition “Dundee Ambient” earlier today. Howarth’s entire piece is also a five hour performance, though he has split it into four quarters. There is a similarity I think in the slow “unfolding” of a sonority. I wondered if “unfolding” was the right word, but I think so – I am sensing less of a journey in both Hodgkinson’s and Young’s recordings, and more a static idea that is revealed to us. Hodgkinson comments “my piece seemed to have a natural length of about five hours instead of the intended eight. I tried various ways of extending it, but to generate three hours of additional material is no small challenge…” I wonder if five hours represents a natural chunk of time for an experience like this?

In my own music, I have been quietly exploring longer spans of time over the past while, almost without realising it. A little over a year and a half ago, I presented a concert of my harp version of Cogadh no Sith here in St Andrews, which ran to about half an hour, and at the time I was suprised that I had created such a thing. I was also suprised that, far from being bored by the experience, members of the audience commented that it did not seem like half an hour, but much less.

The longest continuous live musical performances I have participated in have been quarter peals, typically running just under three-quarters of an hour. The most recent, on 30th November last, was especially important to me, as I rang tenor behind whilst keeping an eye on my student Isabella, trebling in her first quarter. Complete recordings of performances like this are fairly rare (and I have never participated in a recording), but a few can be found on Youtube.

Longer still is my latest electronic composition, H. This minimalist track runs to 53 minutes, though being a computer-generated sound it never involved 53 minutes of performance, only of listening. is it a composition? It hardly counts as a recording, since it is not recorded, but generated; is it even a composition? I don’t know.

Thinking of my 1260 Plain Bob Doubles, and Cogadh no Sith, as extended performances, and wondering about the nature of The Well Tuned Piano as a composition, and about the strange status of H, on the boundary between music and sound art,  made me think about algorithms in music. Change ringing is one of the purest algorithm musics, with the relentless and unyielding unfolding of the algorithm constituting almost the entirety of the musical expression, tempered only by barely-articulated concepts of striking and pace. Ceòl mór is also dominated by the algorithms. It is quite a sight to see an elaborate 10-minute composition be notated in full as a few lines of abbreviated notation, exemplified by some of Barnaby Brown’s scores, e.g. for An Tarbh Breac Dearg. Unlike in change ringing, where the most virtuosic performers use nuances of timing to perfectly express the algorithmic purity of each row, I was thinking that the virtuoso performer of ceòl mór bends the algorithm just a tiny bit, to suprise the knowing listener with an unexpected twist. But is that even true? Is it actually the same as the change-ringer – highlighting the algorithm’s purity through flexing the fabric of the time? Is it possible to break the algorithm? Can a good composer break the algorithm for effect? Perhaps they can in both ceòl mór and in change-ringing, where an adventurous composition can take the method off into new territory.

Does H count as algorithmic music, seeing as how it was created through a numerical and geometric process, which then generated the entire sound file?

In some ways H seems closer to the ways in which algorithmic composition seem to be conceptualised, but I am thinking a little differently – I am not really meaning automated composition, or rules for harmonisation or variation, but the use of repetitive or even recursive rules to give deep structure to the musical work. Perhaps my older concept of geometrical music is more valuable here than algorithmic music.

Thanks to Ronald Smith for telling me about the BBC recording.