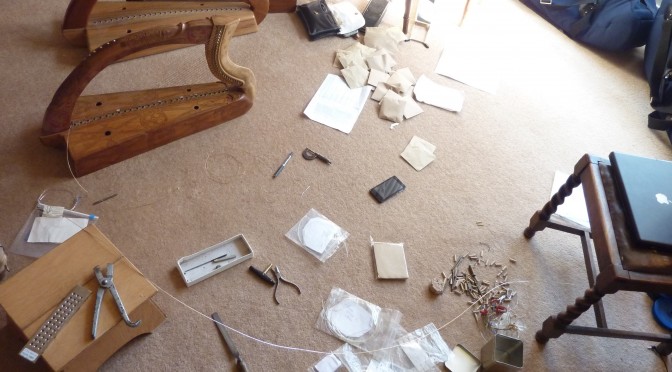 I realised it would be somewhat hypocritical of me to recommend my new Trinity College & Queen Mary harp stringing and tuning schedule, with na comhluighe (the sisters) at middle c, if I didn’t put it onto my replica of the Queen Mary harp.

So, last Sunday’s work was to remove all of the old silver trebles and gold basses, and put on the new brass trebles and silver basses according to the new scheme.

I have had the old scheme, with silver trebles, on the harp now for just over two years. I had tuned the harp with two strings below cronan, giving a pitch of A370/495. I loved how the harp spoke at this pitch, one note higher than the normal setup of a baroque Irish harp. It worked very well for the Renaissance Scottish music, and for ceòl mór.

However, it still pushed me to play low on the harp, and I thought the lush all-silver-and-gold setup seemed over the top for a Renaissance setup… yet that was the music it suited best.

I have been very impressed with the hard, shrill, high medieval sound of the newly-restrung Student Trinity, shocked at how different it is from the usual 18th century setup we have become used to, intrigued how it suits medieval repertory so well and how the Renaissance and later repertory sits more uneasily on it.

My replica of the Queen Mary harp has significantly shorter string lengths than the Student Trinity across its range. (when new, its string lengths were within a few percent of Karen Loomis’s calculated lengths of the original Queen Mary harp as built with a flat belly). This reminded me of an old issue, the purpose of the added 30th tuning pin  and string shoe on the Queen Mary harp. By shifting everything down one place, and gaining an extra treble position, the lengths become very similar to the Student Trinity.

The harp is now restrung with Malcolm Rose’s yellow brass in the treble and mid-range, and my hard-drawn sterling silver in the bass. I have waited a few days to allow the strings to bed in, so that my Youtube demonstration gives a fairer idea of how it sounds.

Most importantly, it highlights for me that a replica medieval Gaelic harp is not a very suitable instrument for playing the baroque Irish harp repertory.