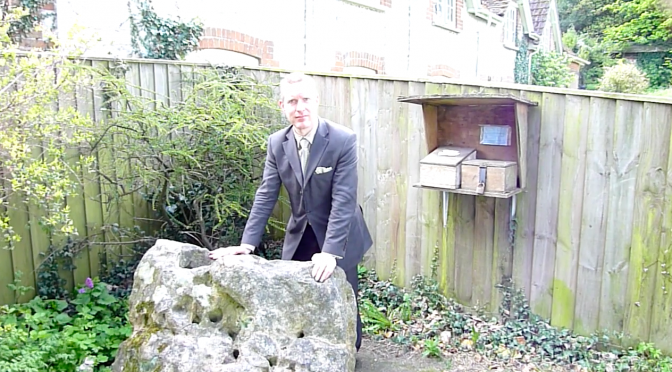 Yesterday I drove out from Oxford to the Uffington white horse. On the way I stopped at the Blowing Stone, and blew it.

I can’t remember how I first found out about the blowing stone. I used to drive along the road from Wantage to the White Horse fairly regularly, and I may have seen the road name sign “Blowingstone Lane”, or the sign for the Blowingstone Inn in Kingston Lisle. I think I last visited the blowing stone over 15 years ago, and at that time I had a photo and I also made a little sound clip, which I put on my old website:

Though the sound quality is very poor, my old recording is being used by the English band Big Big Train for a track on their latest album, Folklore, due for release later this month.

The blowing stone is a fascinating thing, a natural lump of sarsen stone, as is found across this area, and as used for the building of the famous ancient temples of Stonehenge and Avebury. The sarsen stones are often pock-marked or holed, but the blowingstone is unique as far as I know, in that it has a natural hole right through it which can be blown like a horn or trumpet.

You can see how there are a number of other holes in the stone which don’t connect through, and you can also see that there is a lot of use-wear around the mouthpiece area.

The natural bore exits near to the ground; I believe the passage divides in two and exits in two “bells”.

The blowingstone appears to be entirely natural and unworked, and so it is ancient in human terms, having been formed in geological time along with the chalk and flint of this landscape. However it is an enigma how old it is as a musical instrument. The pamphlet available for sale in the tiny honesty box beside the stone, (L.V. Grinsell, The Blowing Stone, 1993) suggests two possible histories of the stone – that its use dates back to the time of King Alfred (late 9th century), or that it was first discovered in the 18th century. I would think that an archaeological investigation of the stone, including use-wear analysis and scientific dating of the exposed surfaces, might offer clues as to how long it has stood above ground.

Grinsell says “The interest of the stone is botanical and geological rather than archaeological”, but for me the primary interest is organological. I am still wondering what methods one might use to generate an accurate 3D model of the bore profile of this instrument.

The traditions recorded in the 19th and early 20th century suggest it originally stood on the downs above, to the south, i.e. on the Ridgeway, or perhaps even along at Uffington Castle, the iron-age hillfort next to the white horse. Is it too much to imagine that the stone’s musical properties were already known and used then, over 2000 years ago? I like to think so.

And what about the megalith engineers who searched all over this landscape for sarsens to transport to Avebury and Stonehenge to build the great stone circles and chambered tombs over 2000 years earlier? Would they have seen it, and noticed the hole through its middle?

One thought on “The Blowing Stone”