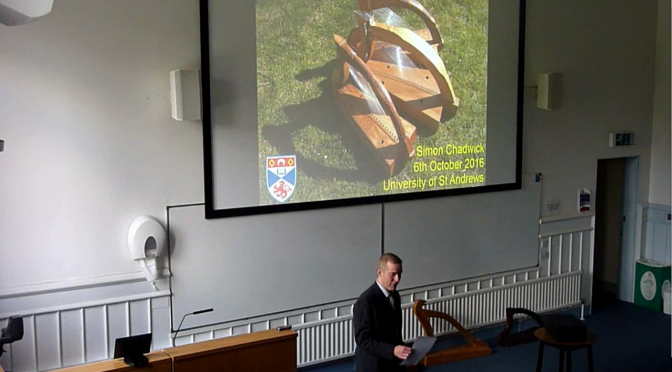 Yesterday I gave my lecture on the clàrsach or Gaelic harp, to the undergraduate students on the Scottish Music degree course at the University of St Andrews.

As is my wont nowadays, I filmed the lecture for you, but there was a mix up with my battery charging, and the camera died 40 minutes in, so you are missing the last 11 or 12 minutes.

Each time I give this lecture (usually once every semester, i.e. twice a year) I try to come up with a new angle on things, partly at least because 50 minutes is not very long to try and say everything about the harp traditions of Scotland!

This time I decided to play more, and concentrate on changes over time. So I took in two historical Gaelic harp replicas, my copy of the medieval Queen Mary harp, and also my HHSI Student Downhill harp modelled after the early 18th century original.

My theme was to be “changes over time”, and so I wanted to spend about equal time on the historical Gaelic traditions, the invention & development of the lever harp traditions, and the revival of historical wire-strung instruments.

To illustrate the lever-harp traditions I took in the wind-up gramophone and played Patuffa Kennedy-Fraser’s 1926 disc; and for the wire-strung harp tradition I took in the Dolmetsch clarsach no.10 to play a little bit of 1930s style music.

However another theme that emerged was the colonial mindset. I always am bothered by this lecture being put into the “folk” stream in this course, which is naively divided into “folk” and “classical”. My problem was, how to succinctly bring this up without spending too much time on it? In the end I was inspired by the ideas I had been hearing from Siobhán Armstrong and Éamonn Ó Bróithe in August, about the relationship between the Anglo and the Gaelic world-views and experiences. In the end I started seeing that a lot of the revival has a big colonial aspect, both the lever harp traditions and the various different types of wire-strung harps.

I need to review Éamonn’s lecture he gave in Kilkenny, to deepen my understanding of how these dynamics play out, and to get a better understanding of my own place in this, as a non-Gaelic speaking outsider.

One thought on “Colonial views of Gaelic harp traditions”