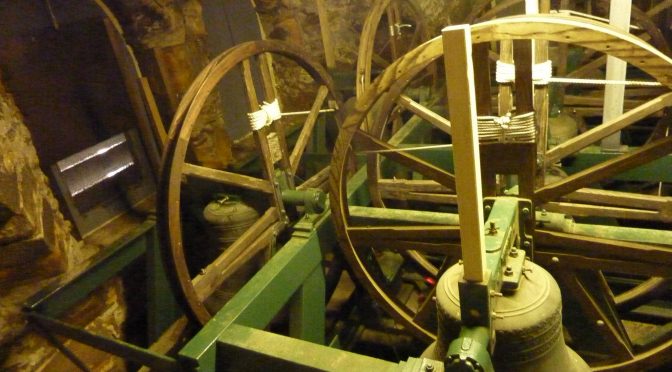 A few different things I have been reading recently have come together in some vague and half-baked ideas on performance issues.

I read a couple of chapters in Nicholas Cook’s book, Beyond the score, music as performance (OUP 2013). I was partly amazed by some of the bizarrely text-centric attitudes he holds up, but I found some of his comments and insights useful. on pages 29-30 he discusses the mismatch between literal reading of a score, and expression in performance. Concentrating on the precise timing of notes, he describes Binet & Courtier’s work in the 1890s, using “rubber tubes placed under piano keys and connected to a cylinder recorder”, as a means to quantify the timing of key-presses (my emphasis):

Binet and Courtier claimed for their system that it would enable the identification of faults in piano performance, that is to say deviations from the nominal values represented on the score, according to which each beat has the same duration, each crotchet lasts two quavers, and so forth. This is the most extreme form of music fundamentalism imaginable, according to which the point of performance is literally to reproduce the score.

Cook discusses MIDI as a modern, far more useful and powerful,  equivalent. He does mention the logical development of this attitude to the score, that is the use of mechanical (e.g. MIDI) systems to “perform” the composer’s work. Yet most people would agree that a synthesised, automated performance reading from a notated score is “unmusical”, lacking something vital which is present in an “imperfect” human delivery.

There are many possible directions one could go in from this point; Cook seems most interested in the idea of the “musical work” and whether artistic autonomy, creation and “authenticity” comes from the composer or the performer. One could also discuss the nature of tradition, the expected set of choices that a performer makes, as opposed to the free possibility space of the choices that could in theory be made. Ealasaid pointed out that in literary theory, the role of the audience in shaping meaning, is highlighted and discussed. I suppose that Cook’s deliberate moving away from a literary model, towards a theatre studies model, might make him neglect this angle, but I also realised that I had not come across much attention to the role of the audience in music-making. I don’t mean the study of reception, but the way the listener actively contributes to the meaning of the artistic phenomena. The most I have come across is ideas of pollution in early music performance practice; you can have the medieval instrument, use medieval techniques and style to play medieval repertory, in a medieval building, and if you want you can even have medieval clothing, seating, and even medieval sanitation, but you can’t have medieval ears, untainted by Romantic classical phrasing or pop beats.

But to return to this mechanistic interpretation of musical performance, aiming to give a perfect realisation of the notation.  I think that these concepts are still alive and well in change-ringing. Performances of change-ringing on tower bells are an interesting form of music from a sociological point of view, since they are rarely even recognised as music, both by performers and by audiences. The tonal quality of the instruments is appreciated; certain installations “sound good” while others sound “like buckets”; the good sound is sometimes assessed on purely aesthetic grounds though also on clear perception of the sound by the performers. There is sometimes more concern for the sound of the bells as noise pollution than as music; at St Salvator’s tower in St Andrews, the openings in the tower (an important part of the acoustical function of the installation as a whole), are almost entirely blocked up for “sound control”, with just little square shutters able to be opened for public performances. One of the issues around the recent York Minster discussion was that the sound of the bells there is very loud and very fine, partly from the quality of the bells themselves but also from the nature of the tower and installation and the open spaces around the Minster building.

Edgar Shepherd, in his book The Sound of Bells (Record Books, 1964) maintains that with English change ringing, “the real glory of bells is revealed” (p.96). Certainly, swinging the bells full-circle “brings out the full beauty and richness of the instruments” (p.12), the combination of the moving bell’s changing sound as it swings, and the self-damping action as the clapper bounces and comes to rest on the soundbow of the bell, give a sound that is very distinctively different from the same bell struck in the same place by a clock-hammer, or swung through a smaller arc. And that sound is very well suited to the quick but steady sequences which characterise change-ringing.

Bells rung full-circle are difficult to control, difficult to make strike at precise times; the flex in the system and the significant delay between starting the movement of pulling the rope to swing the bell, and the moment of the bell speaking, gives a steep physical and mental challenge to the performer. So the aim of many ordinary bands is just to keep everything under control and to sound the bells in the least “lumpy” way possible. like how an inexperienced piano player might practice their scales and simple tunes with the aid of a metronome, so as to avoid wild uncontrolled irregularities in the timing of subsequent notes.

But many bands now achieve extremely high standards of “striking” (the technical name for the accurate placement of the sound of each bell in its place in the sequence). It is instructive to listen to old recordings of bells, selected and held up as great examples of good ringing and good striking, and to compare them with modern recordings. Edgar Shephard’s book includes a little vinyl record with a good selection of recordings from the earlier 20th century, and the standard of striking varies considerably.

Compare with this recent video from York Minster, of extremely high quality ringing:

I hear or read very little commentary on the musical performance aspects of change ringing. I have heard comments about paying attention to “roll-ups” (ascending or descending sequences which appear in the ever-changing sequence of pitches), so as to show them cleanly; and I read once (sorry I don’t recall where) a description of good 12-bell ringing where the little bells were described as “pinking” the big bells in the alternating sequences. But I wonder if these are both attempts to praise more accurate striking over more messy. Certainly, a roll-up where the striking is poor is noticeable as a disappointment; and in my ringing at St Marys in Edinburgh where the tenors are loud and resonant, even slight mis-placing of the little bells makes them almost impossible to hear at all.

At the national 12-bell striking competition, mechanical aids very similar in concept to the piano analysis machines described by Cook are used: “The National Twelve Bell contest developed a ‘strikeometer’ to help the judges with the difficult task of assessing the quality of near perfect ringing” (John Harrison, Bells and bell ringing, Shire 2016, p.52). Most discussion of the strikeometer centres around the difficulty of calibrating it for the loudness and tonal profile of the installation used, so that it accurately measures the strike point of each bell. There’s no discussion about how the timing of each strike should be interpreted; instead, it seems there is a tacit understanding that Binet & Courtier’s worldview is correct: a fault in ringing is when the strike of the bell deviates from its nominal position in an equally-divided temporal grid.

Now it strikes me that the big bells speak slower and longer than the little bells, and this alone must have implications for the musical articulation of each change. Ringers are instructed to, when ringing a little bell, leave “more space” when ringing after a big bell. This is usually rationalised as allowing a visual delay to compensate for the different length of rope and rotational speed on the two bells. But is there no more subtle musical performance element as well?

You can also hear on the recordings, the pause every other change. There’s an example of Yorkshire ringing on Shepherd’s recording, where the changes are rung without that gap.  Clearly the gap has an important function in articulating the musical phrases; I am wondering if, in their video, the York Minster ringers are deliberately adjusting the exact length of the gap to drive some sections of the ringing forward while lingering on others. Certainly there seems to be musical scope to do this, given the very different sounds of the individual changes at different stages in their performance.

In traditional and in classical music performance, I am not sure how much musicians generally try to deliberately make the notes uneven; there is the concept of rubato, which is used to a greater or lesser degree. But in general, I think that instead there is an attempt to put articulation, phrasing or “lift” into the music. I suppose the best ringers are doing this too, knowing the melodic and expressive contour of the current change they can consciously aim for even good striking, but unknowingly bend the time in micro-subtle ways to better express and show the line.

In 1926, Schönberg wrote, “mechanical production of sounds, and the definitive fixing of their pitch, their length, and the way they relate to the division of time in the piece would be very desirable”. Modern sequencers give us this control ability, and we can easily produce MIDI versions of, for example, Bach harpsichord compositions or advanced change-ringing methods. If we groan and complain about the awful synthesised sounds, we can use sampled sounds, i.e. recorded fragments of acoustic instruments. If we don’t want to listen to recordings played through loudspeakers, we can hear the actual instruments speaking “live” in a natural acoustic by using the MIDI sequencer to control an actual harpsichord or swinging tower bell.

But in practice, this is not done – the midi controlled harpsichords just sound relentlessly mechanical, and I don’t know of anyone who has built a mechanised set of bells hung for full-circle ringing – it would be expensive and interesting to design the actuation and control systems to work well, so that the sequencer unit could accurately sound each bell at the exact time required.

But it is clear, neither performers nor audiences are interested in this.

One thought on “Performance”