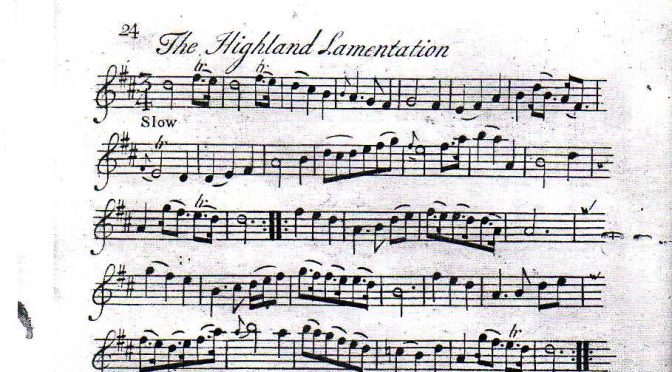 I have been working with a student on Rory Dall’s Port from James Oswald’s Caledonian Pocket Companion. I have written on this blog before about how I think this tune was composed by Oswald as a pastiche of old Gaelic harp style.

We were chatting about elements of harp style in the tune, and how to handle some of the distinctive movements in the variations. There are passages that look very similar to the bass passages noted in manuscript 29 by Edward Bunting, from the playing of Denis O’Hampsey.

I wondered if Oswald had actually heard an old Gaelic harper, and was trying to copy some of their stylistic features in an impressionistic, half-remembered way.

Then I remembered, that when I first sung through The Highland Lamentation, in book 3 of the Caledonian Pocket Companion, I thought it was probably also composed by Oswald, but it was strangely reminiscent of Cumha Bharuin Lough More (Scott’s Lamentation) as collected from Denis O’Hampsey by Edward Bunting.

Did Oswald meet O’Hampsey, and hear him play?

According to John Purser’s notes, in the facsimile CD-ROM, Oswald went to London in 1740, but whether he returned to Edinburgh at any stage is not clear – Purser suggests Oswald was to some degree involved with an Edinburgh freemasonry lodge between 1742 and 1746.

So it is possible that Oswald was in Edinburgh in 1745, when O’Hampsey was there, and when he played for Prince Charles Edward Stuart at Holyroodhouse. But that was O’Hampsey’s second visit – we don’t know the dates of the first visit to Scotland, nor whether he got as far as Edinburgh on that trip.