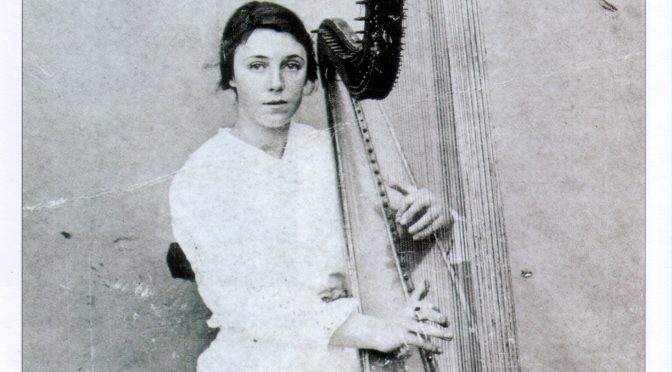 Sometimes, these two issues are conflated, because there is a persistent confusion in people’s minds, about what was and what should be. Andrew Lawrence-King, Katerina Antonenko and Natalia O’Shea, in their article ‘The Historical Irish harp: myths demystified’ in Studia Celto-Slavica 7, 2015, go down this route, trying to justify Lawrence-King’s right-orientation by a number of  implausible suggestions, including that modern practicioners only do it for symbolic reasons; that the historical practice was due to increased incidence of left-handedness, and even that the evidence for historical practice is ambiguous or mis-read. (p.263-4). I actually find this colonial mindset fascinating, that for people like this, the Gaelic left orientation has to be explained; they would never think of trying to explain away the Anglo-Continental right orientation, by suggesting that it was for left-handed people to put their strong left hand in the bass, or that the evidence for right orientation being the norm was ambiguous or debatable.

Others have tried to downplay the ubiquity of the left orientation in the old Gaelic harp traditions. Ronald Stevenson, writing in the Grove dictionary of musical instruments, deliberately obscures the multiple meanings of the word clarsach, and the historical and revival traditions,  when he says “Unlike the Irish cláirseach, which was supported on the player’s left shoulder, the Scottish clàrsach is supported on the right shoulder.”

Ann Heymann, in her book Secrets of the Gaelic harp (1988), p.15) does advance a symbolic explanation for the historical left orientation, but she also disassociates modern practice from historical evidence, by saying “in a modern context there is no practical reason for a beginning student to learn the ‘Celtic’ orientation”. This despite her using the old left orientation in her own playing.

Amid claim and counter-claim, the old Welsh harp traditions can give us a much needed perspective. Huw Roberts and Llio Rhydderch, in their book Telynorion Llannerch-y-Medd (2000), p.26, describe the introduction of the triple harp to Welsh music: “These harps were designed to rest on the left shoulder which was the Welsh custom – on the Continent the harp was played on the right shoulder, which, of course, is the classical way and so it continues to the present day.”

“The Welsh custom” and “the classical way” describes worlds of cultural practice that are rooted in communities and shared traditions, not in arbitrary personal choices or technical constraints. The triple harp was obviously a baroque introduction, and in the 19th century itself largely gave way to the pedal harp, but players learning in the Welsh tradition continued to play their pedal harps using the old left orientation, as shown in the photo here, of Margaret Ann Jones (1899-1976). The harpers of Llannerch-y-Medd seem to have stayed with the old tradition, Huw continuing to use the left orientation. Llio and Huw are rightly proud of their “lineage”, which traces back from student to teacher, in their case directly back to the 17th century in one lineage, and implicitly back to the 14th century via the other.

Other Welsh harpers from the 19th century onwards changed to the right orientation, which leads to the question: why would a beginner harper choose one way or the other? My suggestion is that orientation is a strong indication of the musical lineage of a performer. Harpists who learned primarily from someone firmly embedded in the traditional lineage would likely use a left orientation. Someone who learned from a harpist whose lineage or whose influences were from the Anglo-Continental tradition would be more likely to choose a right orientation.

The Gaelic harp traditions seem to have broken in the 19th century, so anyone today wanting to revive the Gaelic harp traditions has to bootstrap themselves from nothing. I think that the left orientation in this case becomes a symptom of respecting the old tradition on its own terms; of starting from the primary evidence of the first tunes collected by Edward Bunting from Patrick Quin and Denis O’Hampsey, using a replica harp, using the playing techniques in Bunting’s 1840 Ancient Music of Ireland.

Anyone claiming to do this and using a right orientation might ask themselves, where did that idea come from? If the answer is, from the Anglo-European classical harp tradition, then they could also ask, what other subliminal influences are coming out of that world?

6 thoughts on “Left and Right”