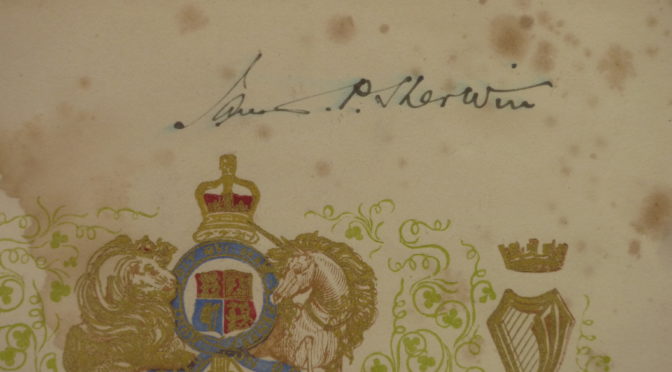 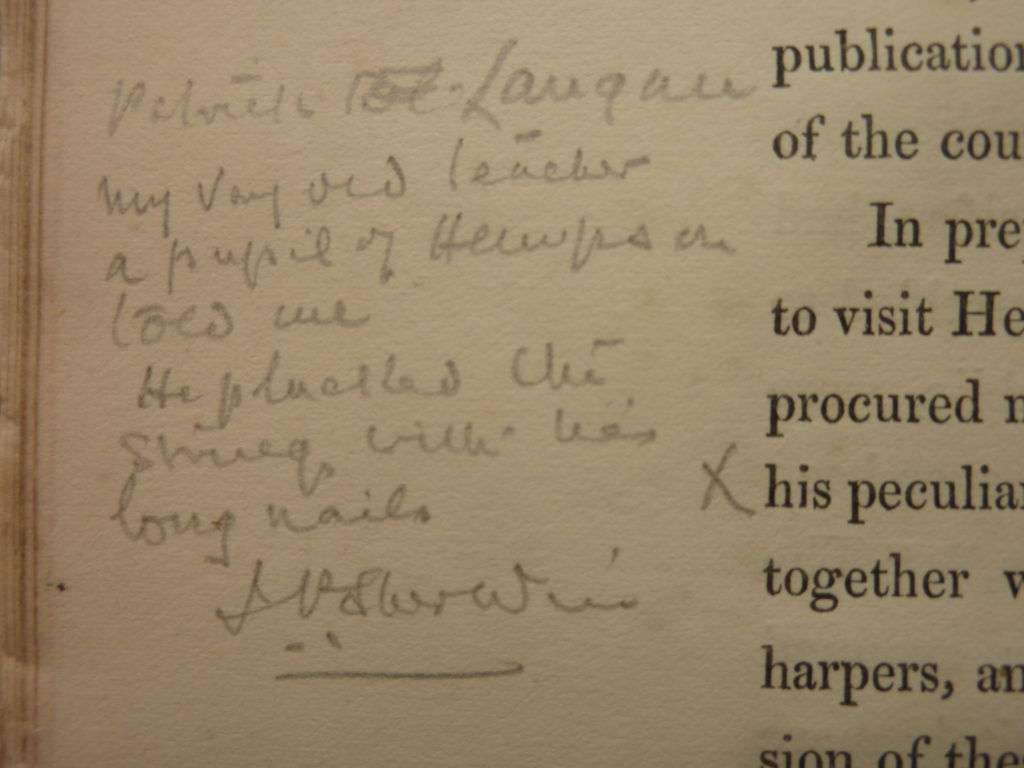 This pencil annotation was written in the margin of p.6 of the preface to a copy of Edward Bunting’s The Ancient Music of Ireland (Dublin, 1840). The book belonged to James P. Sherwin (1871- 1960), a Catholic priest in Dublin. According to the inscription on the title page, the book was given to Sherwin by Mrs Keegan in 1905.

I was fascinated by this, the idea that Patrick Langan is a “pupil of Hempson”. I have been trying to find out more, starting with Sherwin.

Noelle Dowling, the Dublin Diocesan Archivist, sent me some information on James Patrick Sherwin. He was born on 21 November 1874. His address (I don’t know when) was 154 Thomas Street. He attended the Christian Brothers School, James’s Street. He entered Holy Cross College (seminary) on 12 September 1889 in the Matriculation Class, and left in September 1893 to study at the Propaganda Fide College Rome, returning to Dublin in 1895. He was ordained on 12 June 1897 in the Pro-Cathedral, Dublin. His first appointment was as chaplain to St. Michael’s Hospital 1901-04; then he was a curate in Wicklow 1904-05; University Church 1905-27; Parish Priest Ballybrack 1927-41; Harrington Street 1941-60. He was made a Canon in 1939, and was made archdeacon of Glendalough in 1951. He died on 22 December 1960. 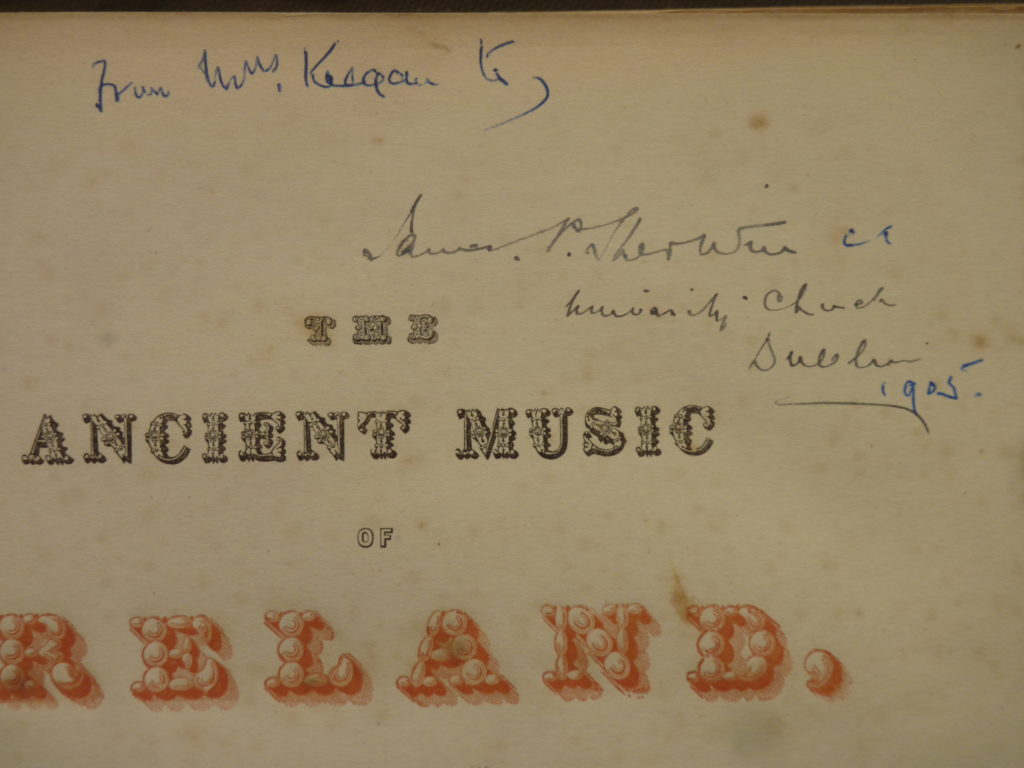 Apart from the little marginal text about Langan on page 6, the only other marks in the book are the two ownership signatures on the title pages, and some marks and underlining in pencil on pages 6 to 8.

On p.6, beside his marginal note, Sherwin has put a pencil cross beside “his peculiar mode of playing and fingering”, and then on page 7 there is a cross beside “the production of new melodies in Ireland has wholly ceased.” There is also a cross beside “The Lamentation of Deirdre”, and he has underlined in pencil “Deirdre”, “Sons of Usnach”, “Children of Lir”, “Pagan times”, “Ossianic airs”, “Erragon More”, “very great antiquity”, “characteristic style”, and in the footnote on p.7 “blind woman from Cantyre” and “Belfast”. On p.8 he has put a dash beside “the ablest composers of the present day are dissapointed in the attempt to catch their style”. He has underlined “unnaproachably unique”, and he has marked in the margin “They bear the impress of better days, when the native nobles of the country cultivated music” and “the mental cultivation and refinement of our ancestors”. He has both marked and underlined “Ballinderry”, and he has underlined “very high antiquity”, and “knowledge of counterpoint”.

There is what looks like a second layer of annotations by Sherwin, in blue biro. on the title page he adds the information that the book was given to him “by Mrs Keegan” in 1905, and on page 73 he has put marginal marks to show the section from “Hempson was the only one of the harpers at the Belfast Meeting in 1792 who literally played the harp with long crooked nails…” to “the Irish were at a very early period, superior to the other nations of Europe both in the composition and performance of music”.

I think these marks can be read as showing how Sherwin read the book. He got it in 1905, and started reading. On p.6 is the first mention of O’Hampsey, and his memory is jolted. He starts to write, “Patrick tol…” and then added info about who Patrick was. Then he has his pencil in his hand, so he carries on reading, and he underlines what appeals to him – ancient names of tunes, and references to the most ancient high culture of the Irish.

Many years later, perhaps at the end of his life, he notes how he got the book, and he finds and marks the description of O’Hampsey. The book does not look heavily used.

I would like to find out more about Sherwin’s early life, family, and influences.

Pasted into the front of the book is a watercolour artwork showing a harp with broken strings, and the Irish motto, An chruit, do scap thrí thallaidhe an rígh which is the first line of the 1842 Irish translation of Thomas Moore’s poem The harp that once through Tara’s halls. At the foot is written in the same Irish script,

On the title page of the book, Sherwin has written in his blue biro, “from Mrs Keegan to,” before his own earlier ink signature, and he has also added in blue biro the year 1905.

At present I don’t know who Mary Agnes Keegan was, or her connection to Sherwin.

I have found nothing yet about Patrick Langan (presumably Pádraig Ó Longáin). Was he a Christian Brother, at Sherwin’s school in around 1880? Perhaps not, otherwise Sherwin might have called him “br. Langan” instead of using his first name. Was he a private tutor for the family?

So imagine Sherwin as a young boy, with his “very old teacher” reminiscing about his very old teacher, the harpist O’Hampsey. What did they discuss? What memories of O’Hampsey did Langan tell the young Sherwin?

Only the long fingernails stayed in Sherwin’s mind, to be written into the book.

One thought on “A pupil of Hempson”