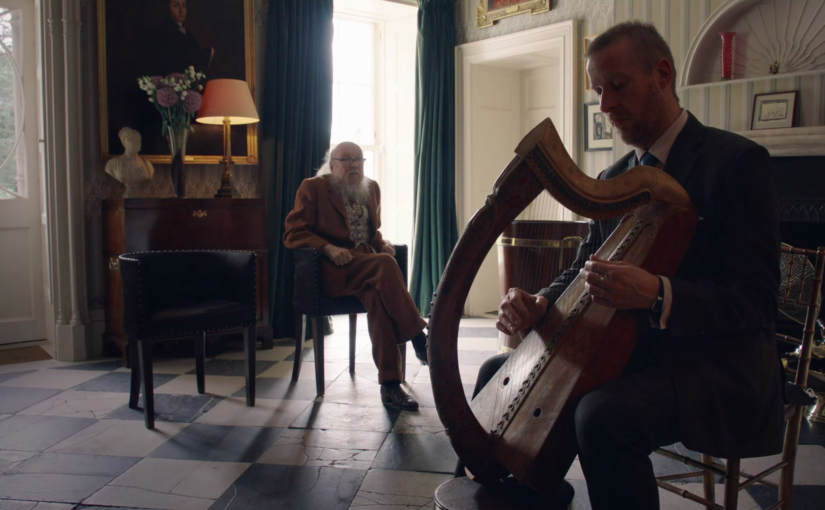 Garech Browne asked me to come to Luggala two-and-a-half years ago, when Richard Curson Smith and Liam McGrath were filming some scenes for a proposed documentary about Garech. Some of their footage has now been used in a new film, commissioned by RTÉ and directed by Mick Mahon, which was first broadcast last Wednesday.

I knew that playing for this kind of film means the footage will be used in tiny fragments, so I decided to play a sweet simple melody – the tune “Luggala” seemed most appropriate. Garech said afterwards that he was disappointed, he had hoped I would play ceòl mór. Garech was particularly taken with the idea of ceòl mór or pibroch played on the harp; he told me that he had read the idea in William Matheson’s book The Traditional and National Music of Scotland. The previous year, I had played pieces of ceòl mór on the harp for him and a few of his closest friends; he had wept openly, and said he never thought he would live to hear it.

The new film is a very beautiful thing, capturing Garech’s character very well. It is visually stunning of course, thanks to the setting at Luggala, but the memories of Garech’s friends in the documentary are lovely as well.

The film is available on the RTÉ Player until the middle of January. Watch it if you can! 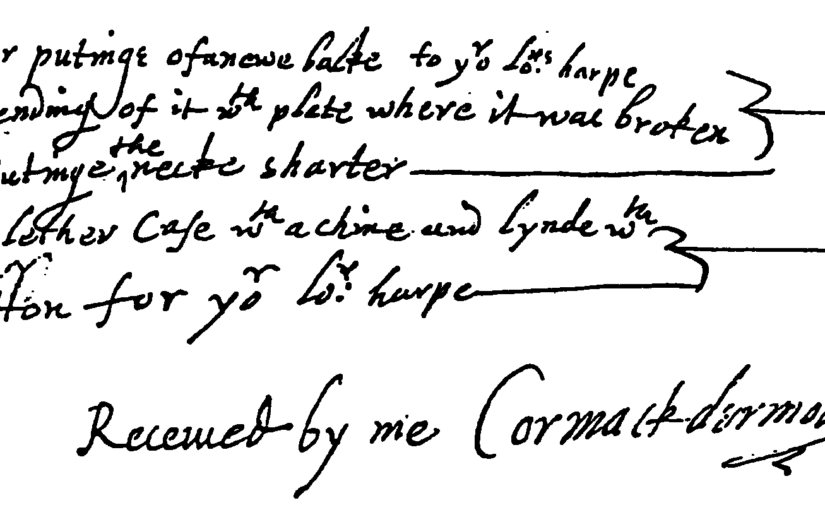 From a practical point of view, seeing as how the case doesn’t affect the musical possibilities or performance of the instrument, there is no reason not to use the best case you can. In the past I have ordered cases from Glenn Cronkhite in California; his cases are extremely well designed and well made. I have three. But he has retired, and production has stopped.

There is also a legitimate research question about how harps were protected and transported historically. From a practice-based-research point of view we might want to experiment with using a reproduction historical case, to find out how well it protects the harp, and how it constrains or enables different performance contexts. Also, from a research-based-practice point of view, we might enjoy and even benefit from using a case made following historical models.

It’s curious that we seem to know more about harp bags, the further back in time we look. Some of the early medieval Germanic lyres even retain fragments of actual bags adhering to the decayed remains. Martin van Schaik wrote an interesting paper ‘The harp bag in the middle ages’, published in Aspects of the Historical Harp (1994) which discussed illustrations of harp bags as well as Irish and Scottish literary mentions.

Peter Holman, ‘The harp in Stuart England’, Early Music XV 2, May 1987, draws attention to a bill written out by the harper Cormack MacDermott:

Itm for putinge of a newe backe to yro Loxs. harpe
and mending of it wth plate where it was broken
and cutinge /the necke shorter ——————————– xvi s

Received by me Cormack dermode

I was curious about the word “chine”. I suppose it might be read as “chire” or some other word but I think “chine” is the most plausible reading. Chine is not a very common English word; I know it from my youth as a kind of unstable steep-sided ravine; and also for the sharp angle along the side of certain types of boat hulls. I note that other meanings focus on the ridge (rather than groove) meaning and so I wonder if Cormack’s case had some kind of ridge? I have not found references to chines in specific leather-working contexts.

The other thing of interest in Cormack’s bill is the case being lined with cotton. I would expect something like this to have been lined with linen instead; it was not until the Restoration in the 1660s that cotton Calico and Chintz were introduced to the English market. A common type of fabric before then, back to medieval times, was fustian, which is a cotton-linen blend. But would Cormack have itemised a fustian lining as “cotton”? Another possibility is that the “lining” was actually a padded stuffing of cotton-wool.