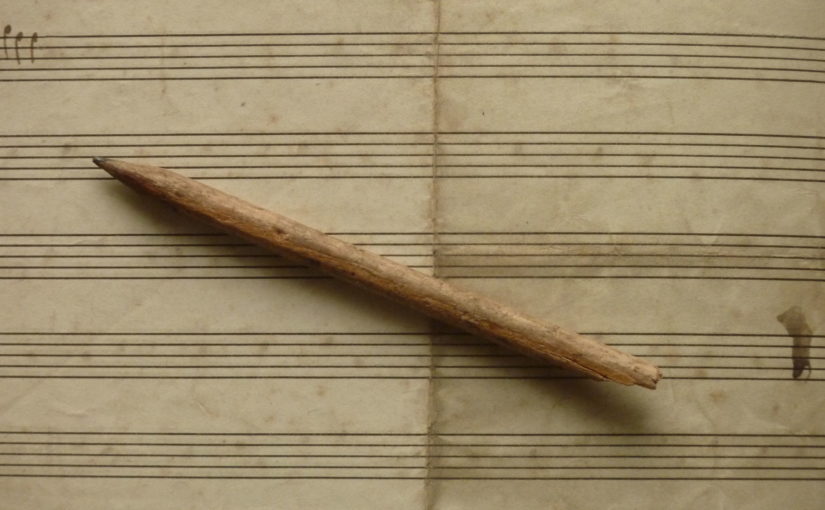 I first got hold of a facsimile of Bunting ms29 (Queens University Belfast, Special Collections, MS4/29) when it was first published online at QUB Library web site, back in 2006, and I have been working from the facsimile ever since.

This manuscript, dating from the late 18th century to the beginning of the 19th century, is the most important single source for old Irish harp repertory. In it, the young collector Edward Bunting wrote his live field transcriptions of the performances of the last of the old Irish harpers. These scratchy incomplete jottings are our most direct connection to the now lost tradition of playing the old Irish harp with brass wire strings. There are many other sources of old Irish and Scottish Gaelic harp repertory, but most are second-hand, re-set for piano, fiddle, or other instruments. The great value of ms29 is the transcriptions live from performance.

Manuscript 29 is not easy to use, because it is written so fast and sketchily. I also started wondering about the lack of metadata in the manuscript – most of the tunes are not tagged with the names of informants, places, or dates, and this information has to be inferred from other sources. Many tunes are written without their title, or with the titles of different tunes written around them. And there are a lot of tunes – I counted 212 different tunes in the manuscript in total, of which about 190 appear to be represented by field transcriptions.

Back in September I started making a transcript of the textual content of Bunting ms29 (Queens University Belfast, Special Collections, MS4/29). This was prompted by a discussion with Siobhán Armstrong, who had started to inspect the binding of the manuscript and had noted where the different gatherings joined together. I started wondering how this structure of gatherings fitted with the content, whether groups of tunes fitted into discrete gatherings, and so I started to compile an index of what was on which page. The project grew and I ended up trying to copy all of the text on every page, and to identify the tune represented in every bit of music notation.

Identifying the tunes has been the hardest part, and is still not complete. My transcript still has many “unidentified tune” tags in it. Hopefully over time we will find identifications for more of these tunes.

You can download my ms29 text transcript and tune identification (PDF or ODT) via my Bunting pages. As I add more information or correct errors, I will update the document.

Making this document is in some ways an end in itself, as it forms a very useful guide to reading and working with the manuscript; it also forms a much more complete index than has been available so far. I have relied heavily on the published work of Donal O’Sullivan and Colette Moloney (both cited fully on the PDF). It is the nature of scholarship to build on and improve the work of previous generations, and I am very grateful for the important work that O’Sullivan and Moloney have done; I would not have got this far without their work.

I think that the value of ms29 was always the transcriptions: the first, quick, instinctive response of the listener to the performance. I have said before that I consider these transcriptions the 18th century equivalent of 20th century field audio-recordings. They are our window into a lost performance tradition.

My ms29 document aims to identify these transcriptions, and to distinguish transcriptions from secondary copies. The manuscript contains a number of tunes copied from printed books, and probably also from older manuscripts. These copied notations naturally don’t give us the direct connection to oral performance traditions that the transcriptions do.

I have become fascinated by the idea of working from transcriptions. To get a replica of an old Irish harp, to string it with brass wire, and tune it following the 18th century tuning schedules, to hold it in the posture and orientation shown in the 18th and early 19th century portraits of old Irish harpers – these methods take us close to the world of the old Irish harpers. And then to play the notes written in the transcription – no more, no less, gives us a sniff of their performance on that day in the 1790s.

My project now, I think, is to identify as many transcriptions as I can, and then to start describing, categorising, and analysing them. There are transcriptions of old Irish harp performances in other manuscripts in the Bunting Collection, especially in QUB MS4/33(1). I wonder if there are any transcriptions like this anywhere else? Was Edward Bunting the only person to do this?

I am thinking that as well as identifying the “normalised” tune titles for them, I can try and find other information about these tunes. Elsewhere in Bunting’s piano manuscripts he tells us who and when he collected tunes from. Can we match versions of tunes in piano arrangements, with the same version in a transcription? Can we group the transcriptions according to this kind of metadata, to understand who the transcriptions were collected from, where and when?

By combining this aggregated metadata with an analysis of the manuscript structure I think we may be able to build up a fine-grained picture of the collecting process and the performing style of different informants.

And we can also use this new insight into the nature and importance of the transcriptions to create new performances on old Irish harp, hoping to get ever closer to a plausible way of returning the old Irish harp to the tradition.