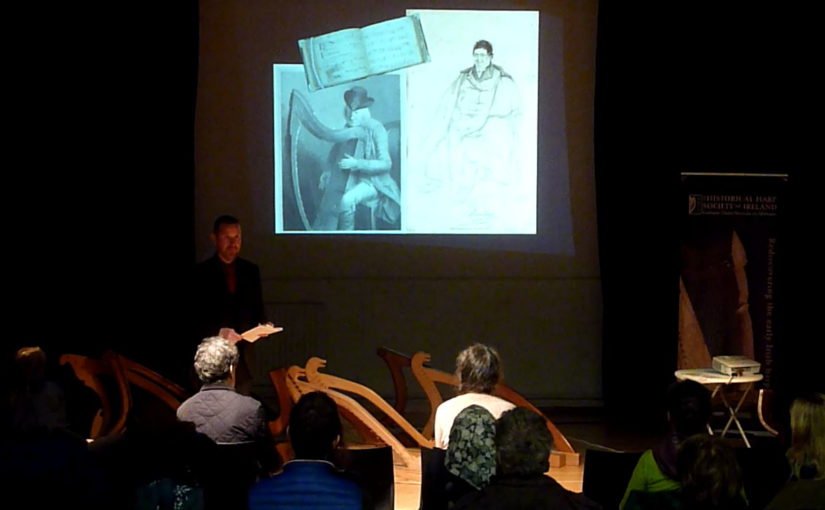 The Discovery Day is a composite event I have been doing for the past year or two, in collaboration with Siobhán Armstrong, Sylvia Crawford, and a sean-nos singer (either Róisín Elsafty or Eibhlís Ní Ríordáin). The format is to have a concert of harp and voice, given by Siobhán and the singer; a talk, given by me, and an introductory class for complete beginners given by Sylvia Crawford. Each lasts for a bit less than an hour and they usually run pretty much back-to-back, to give a kind of complete overview of the old Irish harp traditions.

Every time I do a Discovery Day talk I end up taking a different angle or approach, partly based on where in the country we are doing the event, and partly based on my current research interests and directions. For this event, I wanted to pick up on the work of Edward Bunting in particular, since it was his festival, and other presenters during the festival weekend were talking about the manuscripts in Queen’s University, or Bunting’s corpus of published music.

My talk also picked up on my recent focus of understanding the transcription process as the primary evidence for old Irish harp performance practice; and I wanted to correlate this in to the method of working with replica harps and portraits of harpers.

I was not as confident and articulate as I would like to have been for this talk, but since I had made the effort to film it I thought it might be useful as a record of where I am at the moment.

One thought on “Trying to describe the process”