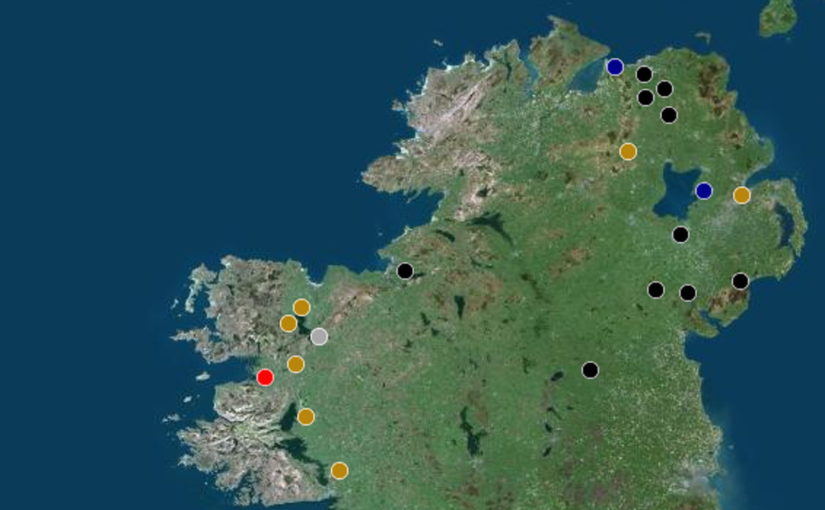 As part of my Old Irish Harp Tunes Transcriptions Project, I have been looking at where and when Bunting collected tunes. My interactive map shows the dates and places he tells us he was collecting.

See full screen. You can toggle the different years on and off. Click on a dot for commentary.

The gentlemen of the Linen Hall Library organised the meeting of the harpers in July 1792. They organised to have a “Skilful Musician to transcribe and arrange” the music of the harpers (advertisement, Dec 1791, Linen Hall Library Beath Collection). Edward Bunting attended, and he does seem to have written down music from listening to the harpers, later describing “the Irish Airs, the notes of which I took at the late performances of Harpers… Ed Bunting Belfast March 29th 1793″ (cited in Downey p57). I have not yet identified any of these July 1792 transcriptions in Bunting’s manuscripts at Queen’s University, Belfast.

However, the focus of the organisers was not particularly on transcribing the music played, so much as getting hold of written copies of tunes, from whatever source. In the introduction to Bunting’s 1797 printed collection, it describes the purpose of the meeting “to procure, while yet attainable, the most approved copies of tunes already in the hands of practicioners, as well as to revive and perpetuate a variety of others extremely ancient, of which there were not copies extant, and which were therefore likely soon to become extinct.”.

I think we can read this as meaning to get hold of sheet music (printed or manuscript) already in the hands of “practicioners” i.e. classical musicians on piano etc; and then to transcribe from tradition-bearers the tunes “of which there were not copies extant”. The fashionable and wealthy Belfast people who came to listen to the meetingmay well have brought along music-books from their private libraries, to share with the meeting organisers. The social and cultural gulf between the Anglo middle-class Belfast attendees, and the Irish-speaking country harpers, must not be under-estimated.

The introduction to Bunting’s 1840 printed book (p4) tells us about his collecting activity in the summer of 1792: Bunting “travelled into Derry and Tyrone, visiting Hempson, after his return to Magilligan … and spending a good part of the summer about Ballinascreen and other mountainous districts in [Tyrone], where he obtained a great number of … airs from the country people. His principal acquisitions were, however, made in the province of Connaught, whither he was invited by the celebrated Richard Kirwan of Cregg, … obtaining tunes from both high and low.”

The introduction to Bunting’s 1797 printed collection, gives fresher detail. We are told that he “made a tour through a principal portion of the kingdom, for the purpose of comparing the music already procured, with that in possession of harpers in other parts, and of making such additions as would render the work complete.”. This is interesting, in that the first aim given is to compare written copies of tunes, with what he heard on tour. It seems that his live field notating was only done to fill in gaps.

What were the written tunes that Bunting took with him on his 1792 tour? Some may have been live transcriptions from harpers at the Belfast meeting in July, but I suspect many were copied from printed books. Bunting’s pocket notebooks (now bound together as Queens University Belfast Special Collections MS4/29) contain a significant number of tunes copied from written exemplars. I have identified tunes copied from printed books by Walker, Neal, and Carolan; others of these neat copies may be copied from manuscripts now lost.

Bunting only mentions seeing Denis O’Hampsey in the summer of 1792, though I think he must have met other harpers on his travels. I think that parts of QUBSC ms4/29 parts 1 and 3 were carried by Bunting on this trip.

There does seem to have been a focus on collecting songs from country singers. The 1797 introduction says “several of the airs in the following collection were not taken from the Irish harp, but from songsters, and therefore as they now stand, are not always adapted to that instrument.”

How reliable are the dates given in these later piano arrangements? Some of them seem to be scribal or typographic errors, giving the wrong date. But I also wonder if Bunting occasionally collected a tune from an informant, or a correspondent, or a printed book, at home in Belfast.

In May 1796, Bunting went to London and entered some proof sheets of his printed piano arrangements at Stationers Hall, to claim copyright. These are detailed in Downey’s book.

In the summer of 1796, Bunting was out collecting in the North of Ireland. He went to Magilligan and collected tunes from Denis O’Hampsey. In the 1840 introduction p6 he says he was “frequently” there but it is not clear whether this means he went back every day for a week, or every year for a few years (I suspect the former).

There are a few other hints that he might have also been to Coleraine and other places in North Antrim on this trip.

In October 1797, Bunting was again in London to enter the complete published 1797 book into Stationers Hall for copyright protection. I think that the summer 1796 tour must have provided some of the material incorporated into the 1797 book.

I count about 20 tunes tagged “1796” in later piano arrangements

In his later piano arrangements, Bunting tags 3 tunes as coming from Arthur O Neill in Newry in 1800. Arthur himself describes meeting Bunting on the road, and being taken to Bunting’s lodgings in Newry, where he stayed a couple of weeks. Arthur O’Neill says, “he took some tunes from me” (QUBSC MS4/14 p71, also Annals p197)

I count no tunes tagged “1801” in later piano arrangements

Westport with Lynch in 1802

In 1802, Bunting’s interest seems to have shifted decisively, and he became very interested in the Irish language texts of songs. This may be connected to a wider interest in Irish language matters amongst the Belfast literary and cultural set who Buning mixed with.

Bunting engaged the scribe, Patrick Lynch, and paid him to go West in the summer of 1802, to collect song words in Mayo. Lynch kept a journal describing his travels and difficulties (QUBSC ms4/24). Lynch eventually ran out of money and had difficulty communicating back to Belfast, so Bunting set off and eventually they met together in Westport. They spent Tue 6th July to Thur 22nd July 1802 together in Westport, and it seems that Lynch took Bunting to meet the singers who had given him song texts, so that Bunting could transcribe the song airs from their singing. QUB SC MS4/33.1 appears to be Bunting’s notebook which he used to transcribe the song airs live from the informants’ performances.

I count 41 tunes tagged “1802” in later piano arrangements, most of them from singers and musicians Westport.

Upside-down at the back of the Westport 1802 notebook, are tunes apparently notated live from the playing of harper Patrick Quin. These are perhaps the clearest and most important group of transcriptions, but they are not dated or localised. They may have been done in 1802, on the way back from Westport, or at some subsequent date. One of the tunes transcribed in this group is tagged as being collected from Quin in 1806 (1840 tune index).

According to Colette Moloney’s index and catalogue, the loose pamphlets and pages of ms29 were bound into a completed book in or after 1802. It looks like Bunting may have continued to write transcriptions and copy notations into the completed book after it was bound; he also numbered the pages almost consecutively and wrote in some cross-references using these page numbers.

A notisce in the Dublin Evening Post, 12 Sep 1808, p.3 (Downey p50) says “We understand that Mr Bunting is at present on his second or third visit through different parts of this kingdom, in order to give the last finish to his important work on the ancient music of Ireland”. Charlotte Milligan Fox, in Annals of the Irish Harpers (1911) p.218-223 prints some correspondence from Bunting describing his work in 1808. He was in Dungannon, and then Sligo, and finally Dublin. He seems to be looking for tunes in manuscripts, and trying to meet collectors or scholars who would help with the completion of his 1809 published book.

I count 3 tunes tagged “1808” in later piano arrangements, as well as 3 named in the letters.

Dates after this in the piano arrangement tags seem to refer to tunes that were sent to him by other collectors or antiquarians. In 1815 he moved to Dublin; in 1819 he married and started a family. It does not seem to have been until 1838 that Bunting took up his work on the old Irish music again, and started preparing for the publication of his 1840 volume. After that he seems to have been working on trying to re-edit the 1797 and 1809 volumes, but he died in 1843.

Creating a detailed chronology like this helps to understand the transcriptions that I am looking at in the manuscripts. I think more and more that Bunting was not in our world, he was not concerned to accurately report what the tradition-bearers were doing. He was concerned to get the “best sets” of tunes. That may well have involved copying the tune out of a printed book, and then taking that copy out to meet a harper, and listening to see if the harper’s version was “better”.

His lack of metadata in the transcriptions is consistent with this. We have to assume that the names and dates in the piano arrangement tags are a kind of nostalgic antiquarianism, perhaps created from memory. And we know his memory is wayward, because of the way he consistently mis-represented the publication date of the 1797 volume.