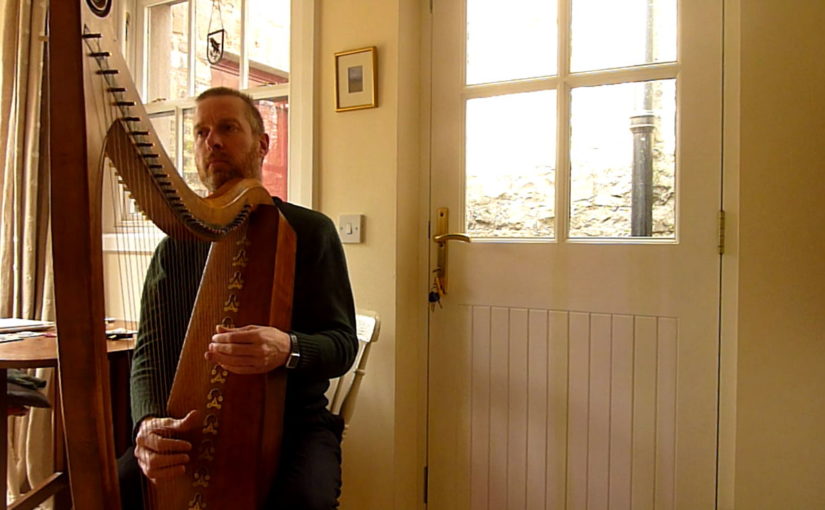 The live field transcription is preserved in Bunting’s manuscripts at Queen’s University, Belfast, Special Collections. There is a dots transcription at QUB SC MS4.29 page 38/36/45/17v, and there is a neat copy of the tune on the same page.

The page is headed with “dermot O Doudy very old dirty” and then there are two pencil texts, one seems to be a phonetical title “Slack Dermot yeoudy” and the other at the bottom is harder to read but may say “James Mr Murphy” (I suppose it could equally be “James Mc Murphy”)

If we look at my Old Irish Harp Transcriptions Project tune list spreadsheet, we can try to understand how Diarmaid Ó Dúda (page 38) sits in the different sections of the manuscript. Page 40 is the final page which has inside margins; there is a missing leaf (p.41-2) and then p.43 starts a whole new section with outside margins. The run of live transcriptions taken from Denis O’Hampsey in 1796 starts on p.44. These different sections on different papers were likely not assembled into their current order until 1802-5.

Pages 3 to 40 of the manuscript are nonetheless not necessarily all one coherent section. My ms29 index and transcript PDF shows Siobhán Armstrong’s notes on the gatherings, and we can see that there seem to be three gatherings in this part of the manuscript, all using similar paper with inside margins.

Pages 3-12 form a single gathering, containing a nice run of slightly rough transcriptions all noted one up, and which I have mostly done Youtube demonstrations of: Casadh an tsúgáin, old way of Molly Astore, the Beggar and Planxty Irwin, Planxty Drury and Planxty Kelly. Maybe these were all done on Bunting’s 1792 trip to counties Tyrone and Derry.

Then pages 14-40 seem to include maybe two gatherings, or maybe they are just one composite pamphlet. These pages contain a real mixture of neat copies, perhaps from books or other manuscripts, mixed in with difficult or problematic transcriptions, at different pitch levels or transpositions (sometimes different transpositions within a single tune). Anna MacDermot Roe is a typical example. Our tune, Diarmaid Ó Dúda, sits towards the end of this difficult section on page 38. Do these pages represent another pamphlet made by Bunting in the summer of 1792?

The dots transcription of Diarmaid Ó Dúda appears to be noted quickly and confidently from the performance of the tradition-bearer. It seems to be at pitch, showing a tune in G neutral mode. This is quite unusual, as G tunes tend to be in major pentatonic mode. G neutral would be related to F major, and neutral mode tunes typically tend to show elements of the “double-tonic” style. The G neutral scale includes G, A, C, D, F, and skips B and E. Diarmaid Ó Dúda has no Bs in it, but there is an E passing note. In the copy it is marked as a grace-note at the end of bar 7, but in the transcription we see it as a slightly smaller dot just before the trilled F. In my realisation I play it as the “grace” called barrlúth béal in airde from the list on p.25 of Bunting’s 1840 book. The grace-note on the final note of the tune is also similarly marked by a little dot very close to the final note in the dots transcriptions. There are quite a few crossed out or misplaced dots in the transcription – did Bunting struggle to notate it cleanly? It seems a simple tune. Was it being played really badly?

I am paying much more attention to the dots, as representing Bunting’s instinctive live response to what he is hearing; I would consider the neat copy to be the start of his classical piano editorial process, with him normalising and correcting the tune according to his classical piano expectations or needs. Nonetheless we have to use these edited neat copies to help us understand a transcription especially as here, when we have only the dots with no barlines or other guides to rhythm and measure.

Bunting published his completed piano arrangement as no.37 in his 1797 printed book. I wondered if this tune being absent from the Spring 1796 proof sheets described by Peter Downey, implied that Bunting may have collected this tune in the summer of 1796; but I don’t see any reason why he couldn’t have had it in ’92 already and just not used it until he was preparing the final edition presumably over late 1796 through to early 1797.

In the annotated 1797 book preserved in London (BL Add ms 41508), Diarmaid Ó Dúda is tagged “Byrne”. Presumably this means that in the early 1840s, almost 50 years after making the transcription, Bunting thought that he had collected the tune from the harper and singer, Charles Byrne. Whether we can rely on Bunting’s memory I do not know. But if we give Bunting the benefit of the doubt, we have a slight problem. Charles Byrne is said to have been a poor harp player; he was not properly taught, but was the guide and harp-carrier for his uncle also called Charles Byrne. He is said to have taught himself to play not very well. However he is also said to have been a fine singer, and Bunting tells us he got lots of songs from him. I wonder how many of the transcriptions in ms29 are from Byrne’s singing, especially the more problematic ones.

The transcription of Diarmaid Ó Dúda is not problematic from a harp point of view; it fits very well on the harp in the old modal system. So, perhaps it was taken from Byrne’s harp playing. But then we remember how Arthur O’Neill (in an unguarded moment perhaps) described Byrne’s playing as “worse than tol lol” and we wonder how useful to us, the live transcription of a really bad harpist, is.

Does Bunting’s text “very old dirty” on the transcription, relate to a song lyric associated with this tune? Donal O’Sullivan printed an edition of Bunting’s neat copy from ms29 in his edition of Bunting’s tunes (JIFSS XXIV 1930 / The Bunting Collection Part II, p.7). He underlays the text of a song which mentions Diarmaid Ó Dúda. The song text was collected by Patrick Lynch in 1802, from Mrs. Gavan, at Drummin, near Westport in County Mayo. Lynch’s neat copy is QUB SC MS7 no. 115 including the risqué third verse which O’Sullivan censored in his edition. O’Sullivan also prints two more O’Dowd songs collected by Lynch, one from co. Sligo in 1802 (QUB SC MS4/7 no.16) and another from Denis O’Hampsey in 1802-3 (transcription QUB SC MS4/26.6 p.6, neat copy QUB SC MS4/26.2 page 5). O’Sullivan remarks that “it is curious that … three different songs about the O’Dowds, collected in three different counties, should be written in the same meter, employing the same rhymes for the most part, and being presumably intended to be sung to the same air”. However I don’t see any grounds for supposing that the specific tune we are looking at is what these words would originally have been sung to. Unless we can find a relevant tune in Edward Bunting’s 1802 Westport notebook (QUB SC MS4/33.1) then we have to conclude that the airs to these songs are lost. It is quite possible that the airs to these songs was a version or variant of our tune, but even if they were, it seems to me that they would be handled very differently, as we see in the living tradition with the difference between a vocal version and a fiddle or pipe instrumental version of the “same” tune. It seems very forced to set one version of a text, to an instrumental tune collected in a different part of the country.

Diarmaid Ó Dúda also appears in O’Neill’s Music of Ireland, 1903, under the section “O’Carolan’s Compositions” (no. 653 on p.117). But O’Neill seems to have included all kinds of odds and ends in this section and so people generally don’t believe this attribution.

One thought on “Diarmaid Ó Dúda”