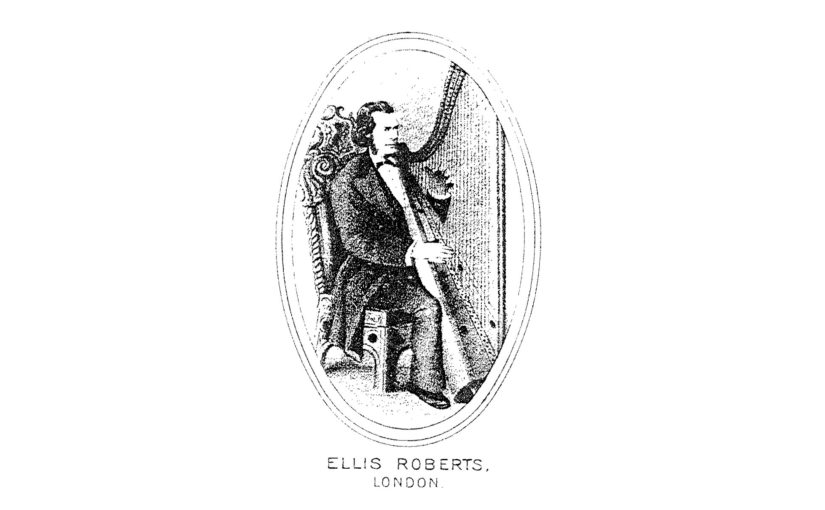 Our work to re-discover and/or reimagine the music and playing techniques of an extinct oral tradition has a number of ingredients, and one of these is the physical instrument itself. I put a lot of value on the study of the museum harps, which we know were the actual instruments owned and played by tradition-bearers; for some of them we have the physical instrument, preserved since the death of the performer; we have a portrait of them sitting with the same instrument; and we have live transcriptions of their playing.

The instrument can sometimes be thought of as a kind of constraint on what you can and cannot do. However I am more and more aware of the idea that a performance tradition can ignore the constraints and especially the possibilities of an instrument. I think I first was explicitly aware of this from the Finnish jouhikko tradition, where Juho Villanen (1846-1927) played a three-string jouhikko for the collector A. O. Väisänen in 1912. Villanen had made the instrument himself many years ago. He tuned the three strings to g d’ a’. “Villanen did not use the G string at all, but played his pieces on a single [a’] string while the other [d’] was a drone” (Nieminen, Jouhikko, 2007, p.41).

I have posted here before about the Irish pipes, and how the tradition does not take full opportunity of the possibilities offered by the instrument. You could even say the same about traditional fiddle styles, where the player usually stays in first position and does not use the full length of the bow. I start to wonder if it is a classical idea that the instrument has to be used to its full potential, pushed to its limit, and I wonder if this is connected to the idea of “improving” the instrument to extend those limits. I also think there is a connection in Ireland in the 19th century, where the old Irish harp with wire strings was pushed aside and eventually supplanted by the Anglo-colonial-classical gut-strung pedal harp and lever harp.

Ellis Roberts (1819-1873) wrote a Manual or method of instruction for playing the Welsh harp originally written in 1858 but published in 1902. This seems to be a very interesting insider’s testimony from the Welsh tradition. He describes the tuning of the telyn deires (triple harp) on pages 3-4:

He gives a cycle of 5ths and 4ths to set the diatonic notes of the outer rows including F♯ in the outer row. He starts to discuss the inner row of strings, starting with C♯ on the inner row “situated between C♮ and D♮” but then he gets side-tracked and says that

the C being raised half a note enables the performer to play in the key of D. Of course every C through the scale must be raised a semitone

– interesting to see that the outer rows of the harp are re-tuned for different keys, using the inner row only for “accidentals”.

Then he gives a cycle of 5ths for tuning the inner row of sharps and flats, and says “you will find the Harp scale Diatonic and Chromatic quite correct according to scientific principles”

On p.10 he writes “General Observations”. Again he says:

It being the custom (as before alluded to in Chapter I on Tuning) to tune the Welsh Harp in the key of G (though for what reason I have not been able to ascertain), the first Exercise will begin in that key. The more natural key would be C to open with.

He has what in Scotland might be referred to as “the cringe”, referring to his traditional practice as “inconsistent with modern usage” and quoting Boscha as an “eminent author” on harp technique. This is the same measuring ones own traditions by Anglo-classical norms, as I have seen in other Scottish music traditions in the early 20th century.

The Chromatic Scale on the Welsh Harp is perfectly complete, though its notes are rarely used by Welsh Harpers, for the following reasons – First; Flats and Sharps are seldom used in Welsh Music except as accidentals. Secondly, being in the Middle they are difficult to play without causing a disagreeable jar upon the outside strings. And lastly, the art of Fingering the “Middle Strings” has been hitherto unknown to us. I never heard a chromatic passage played by any Welsh harper, though the whole Chromatic system is as perfect upon the Triple Harp as it is on the Piano-forte, but of course more difficult to execute. I see no reason why the Music of Corelli, Handel, Haydn, and Mozart should not be performed upon the Welsh harp.

But more interesting still is that he learned in a tradition, and was strongly enough invested in that tradition, which used and required a fully chromatic triple harp but which made minimal use of the inner chromatic row of strings.

Does this parallel our testimony of Carolan playing his tunes with “no bass”, even though his harp had a full 2 octaves below na comhluighe g? Did Carolan have such a big harp with all those strings tuned to their allocated pitches because that was his tradition, even though he had no need or inclination to use them, just like Villanen had the 3rd string on his jouhikko?