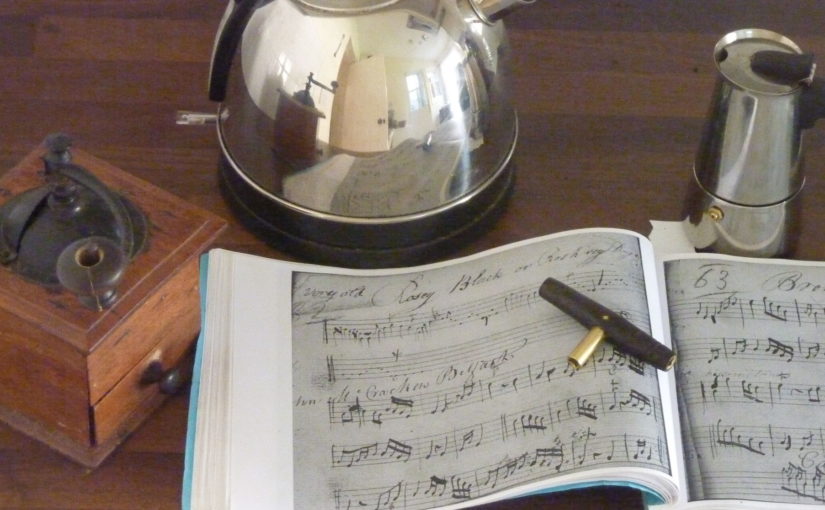 The transcription is at Queen’s University, Belfast, Special Collections MS4.29 p.62/58/067/f28v. This page from one of Bunting’s little pocket collecting pamphlets, is headed “Rosey Black or Rosh veg Dooy” and “very old”. The transcription seems nice and clear with notes and dots but no barlines. Underneath the transcription Bunting has written […m] McCracken Belfast” – I don’t know the significance of this. Then on the lower half of the same page, Bunting has made a neat edited version of the tune.

The transcription shows the tune written at pitch, either in E minor or A neutral. There is no F in the tune; there is an intrusive C at a few points (the notes of both E minor and A neutral pentatonic mode are E G A B D). Bunting has written a few + or tr marks, and a couple of wee grace-notes in the transcription. The strong notes and pulse of the transcription is ambiguous in places due to the lack of barlines, but we can perhaps use the neat copy to help us understand this, as long as we remember that the neat copy is Edward Bunting’s edition and has been changed in a number of ways from the transcription.

There are many different notations and piano arrangements of Róis or Róisín dubh in Edward Bunting’s notebooks and publications, but we can group them together and see that the various copies derive from just three different performances, and so we can understand that Bunting has in all his many copies, three versions of the tune.

The first version is tune no. 18, on p.16 of the 1840 book, titled “Black rose bud”. In the index p.vii Bunting says it was collected from D. Black, Harper, in 1796. But I am questioning this attribution, because the melody of this piano arrangement is clearly derived from a transcription in Queen’s University Belfast, Special Collections, MS4.33.1 p.42. This transcription was made by Edward Bunting from a traditional singer in or around Westport, between Tue 6th and Thur 22nd July, 1802. Bunting had gone out to Co. Mayo to meet with Patrick Lynch, who had been collecting song texts. It seems that Lynch took Bunting to meet his informants so that Bunting could notate the tunes from them.

This index entry in Patrick Lynch’s Journal refers to the text of four quatrains written out neatly in Lynch’s song book, QUB SC MS4.7.091, no.58, titled “Roisin Dubh” and beginning “A Roisin na biodh bron ort far eighrigh dhuit”. Colette Moloney (Introduction and Catalogue p.209) says that these words are tagged “Castle Barr” at the top of the page, but I don’t see that on the online facsimile (the image may be cropped).

On the next two pages are 10 more quatrains, tagged at the top of the page “Drogheda”, numbered “59” and titled “Rois Bheag Dubh” and beginning “Beidh eiclips ar na speirigh is doirtear fuil”. This must be a second independent version of the song, inserted by Lynch for comparison. This manuscript is not a transcription notebook, I think it is a neat copy made by Lynch for presentation purposes. There is a second copy of the Castlebar words in QUB SC MS 4.11.

At the moment, I have not done any serious collation of the song airs transcribed by Bunting in QUB SC MS4.33.1 in early summer 1802, and the song words collected by Patrick Lynch on the same trip, presumably from the same informants – that’s a project for someone else. So, I would not say that for sure the lyric beginning “A Roisin na biodh bron ort far eighrigh dhuit” goes with Bunting’s first version of “Black rose bud”, and that the tune and words both come from the singing of P. Lynch, hairdresser at Castlebar, but it looks pretty likely.

The second version of our tune was printed on the very next page of the 1840 book (no.19, p.17), with the title “Second set of black rose bud”. In the 1840 index p.vii, Bunting tells us that this second version came from a peasant in Cushendall in 1804; in the introduction p.97 he says it was from the Lower Glens, co Antrim; in QUB SC MS4.27 he says it was from the Low Glens in 1803; and in QUB SC MS4.12 he labels it “Dr. McDonald’s set”. The tune appears in QUB SC MS4.29 p.34/34/043/f16v where it is titled “Doctors set bad good not very”. This notation in MS4.29 is clearly not a transcription but is copied from another written version; the other two tunes on this page are copied from a printed book. My guess is that Dr. James MacDonnell, originally from Cushendall in the Lower Glens, had notated it from a traditional singer in 1803/4, and had sent Bunting a manuscript copy of the tune, which Bunting subsequently copied into a blank space in his pocket notebook.

Bunting gives us more information about this version of the tune, in the 1840 introduction, p.97:

(No.19 in the collection) Roisin Bheag Dubh “Little Black Rose-bud” – Differs only slightly from the preceeding. It is here set according to the version preserved in the lower Glens of the county of Antrim. The cadence at the termination seems to lean so much more to E than A, that the Editor has adopted the former key-note as its tonic. This curious anomaly is frequently observed in these simple airs.

Donald or Daniel Black is an interesting harper and we have some snippets of information about him. In the context of this tune, Bunting describes him singing with harp accompaniment – a rare eyewitness account of a harper singing to their own accompaniment.

(No. 18 in the Collection) Roisin Dubh. “Black Rose-bud” … It was sung for the Editor in 1792, by Daniel Black, the harper, who played chords in the Arpeggio style with excellent effect. The key-note at the end of the strain, accompanied by the fifth and eighth, without the third, has a wailing, melancholy expression, which imparts a very peculiar effect to the melody.

Bunting has put descending arpeggios in his 1840 piano arrangement of the Castlebar hairdresser’s vocal version of the tune, but I don’t think this piano bass is anything more than Bunting’s newly composed harmony, inspired by his memory of Black’s playing over 40 years previously.

So we have three conflicting pieces of information. we find the transcription source of Bunting’s first version of the tune in the Westport 1802 notebook; Bunting says that the tune was collected from Black in 1796; and he says that Black sung the song to him with harp accompaniment in 1792.

Perhaps all three are true. Perhaps Bunting prepared his 1840 first version from the Westport 1802 notebook. Perhaps he did collect a version from Black in 1796. And perhaps he did hear Black singing the song with harp accompaniment in 1792.

In which case, is the QUB SC MS4.29 p.62 transcription from Black in 1796? Bunting tells us (1840 intro p.76) that Black’s “chief resort, when in Antrim, was Mr. Heyland’s seat at Glendaragh, near Antrim, where the Editor saw him shortly before his death, in 1796. He sung to the harp very sweetly”. (see my Bunting Collecting Trips post)

It is also possible that some of this information printed in 1840 is wrong, and that we are being led wildly astray by Bunting’s disorganised waywardness… Bunting was telling us about the events of 44 years ago; we can see looking at his manuscripts that his notes are scattered, partial, and full of context-less notes.

We can see from my Old Irish Harp Transcription Project Tune List spreadsheet, that a lot of these tunes appear in QUB SC MS4.29 between pages 93 and 106. We also have a tune, tagged Black, on p.64 (possibly related to the p.62 Róis bheag dubh). It is not clear to me at the moment how the different gatherings of ms4.29 have been shuffled and re-assembled before their first binding (see my pdf), and whether they may originally have been related.

If the p.62 transcription was written from Black’s performance at Glendaragh House in the summer of ’96, was he singing it? There is no indication in the transcription of “chords in the Arpeggio style” which made such an impression on Bunting. And the structure of the melody as transcribed seems very harp-like. Perhaps Bunting asked him to play the tune on the harp so that he could more easily make a transcription. We really know so little about the details of this process.