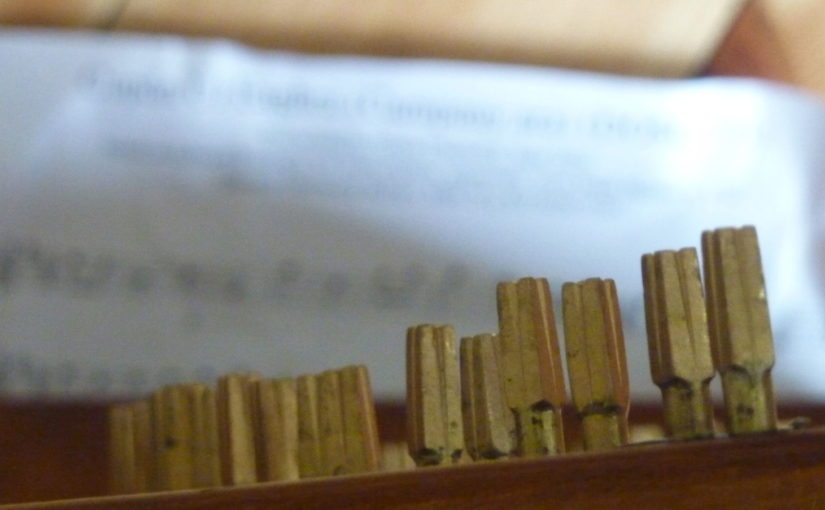 I was hoping to make a video demonstration of the Carolan song air Cupán Uí Eaghra (O’Hara’s Cup), but in the end I don’t feel that I understand it enough, based on the transcription manuscript. It is an interesting and slightly unexpected aspect of this Old Irish Harp Transcriptions Project that there are tunes which are clearly notated live from the playing of a harper informant, but which it is very hard to convincingly reconstruct the harp performance behind the transcription.

Bunting made a piano arrangement in 1798, based on this live transcription. His piano arrangement is in QUB MS4.33.3 page 34-35, where it is tune no.25. The title is given as “Copan iu Ara or O’Hara’s Cup by Carolan”, and at the bottom of p.34 he has written “From Hugh Higgins County Mayo”. It looks like “Mayo” has been written over “Leitrim”.

This tag, in combination with the attributions of the tunes on neighbouring pages in MS4.29, means that we can be fairly certain that this live transcription was made in the summer of 1792, from the old Irish harper Hugh Higgins. For more about Higgins, see my post on Tá mé mo chodladh.

On page 37 of the piano manuscript, after the end of the next tune (Doctor Hart), Bunting has written “These 2 last tunes are very middling hard to set basses too”. Doctor Hart is also tagged “Hugh Higgins County Mayo” and was notated live on p.90-91 of MS4.29.

In the transcription of Cupán Uí Eaghra on p.82 Bunting has written “B” below notes in the transcription in 6 different places. These look like they might represent bass notes played by Higgins. Are these the only bass notes that Higgins played? Does this reflect Keane FitzGerald’s testimony that “Carolan’s tunes had no bass to them originally”? Does Bunting’s difficulty in harmonising these tunes with classical piano basses reflect the tunes being originally composed, and subsequently passed down in the tradition, as single melody lines?

Usually, the “B” in the transcription clearly indicates which note is to be dropped an octave and/or played with the right hand. One thing I notice in this particular transcription is that this is not always clear, as if Bunting himself was not sure. I am thinking that this transcription, made in his first year of collecting, is difficult precisely because he was unfamiliar with the old Irish harp style and idiom, and was not “up to speed” with notating the details of a live performance.

Bunting made a live transcription from a singer on his collecting trip to Westport in July 1802. Bunting had gone to Westport to meet up with the song collector Patrick Lynch, and Lynch seems to have taken Bunting to meet the singers whose song words he had already collected, for Bunting to notate the song airs. Lynch records in his Journal (QUB MS4.24 p.45) that he got the words of “Cupan i Ara” from Mr Bartley in Killargy, county Leitrim.

Bunting titles the tune “Capan ni Ara or Ohara’s Cup”. In the top left corner he writes “in A.M.” which is his shorthand in this notebook for the key signature – this tune is in A major and so should have three sharps. After the tune he writes “This set sings to the words / another set in Old Book No. 25”. At the bottom of the page he writes “Mrs. Conner Mrs Conner” but I don’t know if that is connected to this notation.

Did this tune also come from Mr Bartley? That seems unlikely, since Killargy is about two thirds of the way from Belfast to Westport, and yet the implication from Lynch’s journal p.19 is that Bunting was only collecting tunes from the singers in and around Westport (Lewisborough is mentioned). So perhaps it was one of the Westport singers that gave Bunting this version of the tune. Pages 22-31 of Bunting’s Westport 1802 notebook (QUB MS4.33.1) contains tunes numbered 1 through to 15, and our tune on p.25, is no.8. Page 22 is headed “Redmond Staunton the blind man” and p.24 is headed “Redmond Staunton” – is he the source of this song air? More work is needed to untangle all this.

The note about another version must refer to the 1798 piano arrangement of the Higgins harp set, which is no.25 in QUB MS4.33.3, and confirms that Bunting considered the two (DOSC 130 and DOSC 131) to be versions of the same tune.

A neat copy of the words written by Lynch in one of his presentation manuscripts is in QUB MS4.7 p.023, no.7. The words are titled “Cupan i ára” and are as follows:

It seems to me that two of these quatrains written by Lynch would fit onto the tune noted by Bunting in ms4.33.1 – so we have two and a half verses here. Lynches 1, 2, 4, 5 match Hardiman’s two verses and also ÓMáille’s two verses; I wonder if Lynch’s quatrain 3 matches half of one of Thady Connellan’s verses in Duanaire (Fonna seanma) (1829) – I haven’t yet seen this book (the RIA have the only copy I know of).

Donal O’Sullivan (Carolan volume 2 p.80) gives a number of other versions of the tune from traditional musicians in the 19th century in the Forde manuscripts. Joyce (Old Irish folk music and songs, 1909 p.342) prints a version collected by Forde, which has been synthesised from version supplied by John Windele “the distinguished cork archaeologist (died 1865)” and P. Carey, “a piper of Co. Cork”. This is the version that Donal O’Sullivan printed as DOSC 130, with his invented title “Kean O’Hara First Air”.

It would be nice to see the other Forde versions especially the one collected from Hugh Beirne.

Two tunes, or two versions of one tune?

Donal O’Sullivan lists Higgins’s harp version, and the various song versions under separate numbers in his book, as DOSC 130 (the sung version) and DOSC 131 (the harp version). He assumed they were different tunes with the same title, and at first glance they do seem very different. However it is clear that Edward Bunting considered them as versions of the same tune, from his comment in QUB MS4.33.1 “This set (DOSC 130) sings to the words / another set (DOSC 131) in Old Book No. 25”. Bunting did not publish either of the two variants.

This tune could be an interesting case study for how harp instrumental style can shift a tune a long way away from its song air version. It would be an interesting study to line up all the different versions and make formal comparisons of where they track each other and where (and how) they diverge.