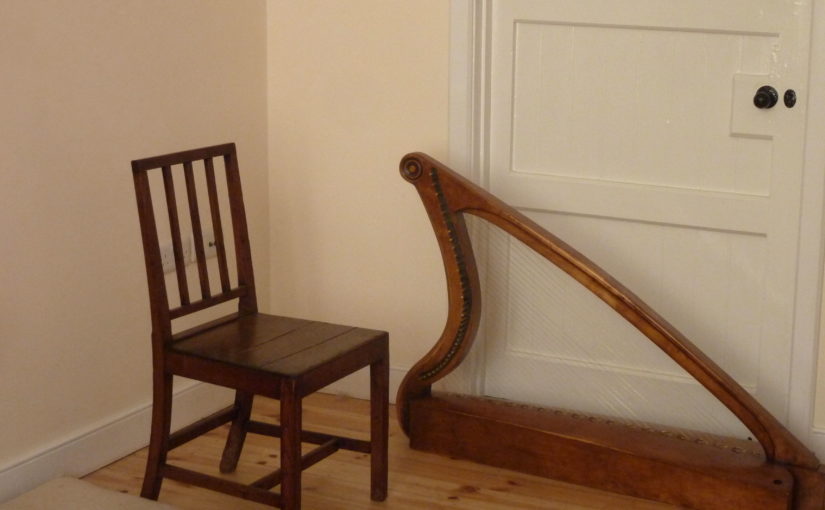 I made a video demonstration of the first half of Miss Dillon and Jigg, by Carolan (DOSC 35).

Why only the first half? Well, this tune is a great case study for Edward Bunting’s working practice, transcribing tunes from the old harpers in the 1790s, finding tunes in old books, and creating new synthetic “improved” piano arrangements out of it all.

Bunting published the tune of Miss Dillon twice, as no. 24 in his 1797 publication, and on page 18 of his 1809 publication. Both of these seem to derive from substantially the same original source(s).

Basically I am dubious about these tags, because they were done so late on, around 50 years after he was collecting tunes from these harpers, and also because they tend to contradict other attributions. For this tune, however, he doesn’t give us any other attributions or sources, and so we have to inspect his notations for clues.

There is what looks like a live transcription of Miss Dillon, on one of Bunting’s little collecting pamphlets, now Queen’s University Belfast, Special Collections MS4.29 p.88/84/093/f41v – p.89/85/094/f42r. The tune on p.88 is headed “Miss Dillon” and then in a slightly different ink is added “and jigg”. On page 89 at the end of the notation is written “Jigg / Jigg by Carolan’s”.

The tune sits in the midst of a section of tunes apparently collected from Hugh Higgins in 1792, but that in itself does not mean it is a Higgins ’92 transcription, since Bunting seems often to have inserted odd notations into spaces in earlier notebooks; this tune could therefore be earlier than the Higgins group, or perhaps less likely, could have been inserted later into a blank page in the middle of the Higgins notations.

The dots, and the over-written editorial changes

There is clearly some over-writing over the original dots transcription, and it is the process of trying to understand these layers of over-writing that made me only play the first two sections of the tune for you in my video demonstration.

Section 1, bars 1 to 7 look like Bunting’s normal transcriptions, being dots with added stems, beams, barlines and bar numbers. But a curious thing happens in bar 8: there is a dot on the 4th line, indicating treble clef G, but it has been deleted, and replaced with a bass clef sign, and notes for bass clef first space G and fifth line G. Bunting very rarely uses clefs of any kind in his transcriptions, and this looks to me clearly like a conscious editorial decision to insert these bass Gs, replacing his initial transcription dot G.

Section 2 continues as a normal transcription, with the dots enhanced as usual with stems, beams, barlines and bar numbers. But again in bar 8 we see the careful erasure of the initial dot for treble clef middle C, and its replacement with a bass clef sign and bass clef 3rd-space C and 2-ledger-lines bass C.

We also see that in one place in each of the first two sections, Bunting has changed a dot note into a large minim. He very rarely uses minims in his transcriptions, usually preferring to insert rests in between crotchets to fill out the time value of a bar or to lengthen notes.

These minims, and the bass clef insertions, suggest to me that they are part of a later “editorial” layer of writing on this page. But, I am happy to respect them in my realisation of a potential harp performance exemplar of this transcription, since they respect and are consistent with the earlier layer of dots and notes transcription.

When we come to section 3, however, the picture changes slightly. Not only do we have more minims, but from bar 8 the clefs come thick and fast, with alternating bars showing a bass clef and a treble clef. There is no sign of underlying dots being deleted and replaced with the bass clef notes. What is going on here?

This looks to me like at least bars 8 onwards of the third section are new editorial material by Bunting, and not over-writings of a dots transcription.

And what about the jig? This looks more like we are back into dots transcription, with added stems beams and bars. We do have two bass clef passages, but they are like the ones in sections one and two, inserted over deleted notes (though the deleted dots are less clearly related to the bass notes inserted).

If we check my Carolan Tune Collation spreadsheet, we can see that the tune of Miss Dillon first appears in the “Lee” collection c.1778. It is titled there “Young Lady Dillon” and the jig is titled “Jigg”. Below is a facsimile from the Broderip and Wilkinson edition of 1799-1808

You can see that this has the same four-part structure as Edward Bunting’s MS4.29 p.88 notation. What interests me is that this print includes the curious alternation of bass and treble motifs in section 3, but they are more incompetently handled, with the timing going completely haywire and the motifs not lining up with the barlines.

I also notice that the jig has a similar structure to Bunting’s jig, but with a slightly different arrangement of the motifs.

Bunting may well have had a copy of either or both of these books in the early 1790s. There are a number of tunes marked on my Old Irish Harp Transcriptions Project Tune List Spreadsheet which indicate that I have identified a tune in the manuscripts as having been copied out of Lee or out of John Carolan’s book, though I have not collated Bunting’s manuscript copies against Thompson’s book.

I also notice that Bunting’s two published piano arrangements are, just like the Lee and Thompson versions, set in F major.

So, is the notation of Miss Dillon on MS4.29 p.88 a partial transcription from a harper, completed and expanded by copying (and improving) from the Lee and/or Thompson printed books?

In my post on Cupán Uí Eaghra I discussed two very different transmission pathways for Carolan tunes, one through the singers and one through the harpers, which would give us song-air version and harp instrumental versions respectively. We can of course allow that some harpers also sang, and Bunting may have notated combined harp-song performances. We can also think that Carolan’s tunes also went into the fiddle and pipe traditions, and were passed down in forms idiomatic to each of those instruments.

Should we see a tune like Miss Dillon highlighting another, independent transmission pathway, through the dissemination of keyboard settings of Carolan’s tunes? Many of the big houses and patrons of Carolan would have had harpsichords or similar keyboard instruments. I can well imagine young Lady Rose Dillon wanting to play Carolan’s tune which he had composed for her, on the harpsichord; She, or a music tutor, may have elaborated Carolan’s tune in keyboard style; Carolan may have approved; the tune may have been written in that improved elaborated keyboard style into Miss Dillon’s private keyboard manuscript; and copies may have circulated in manuscript amongst Miss Dillon’s relatives and friends.

This is all wild speculation, but Lee had to have got his material from somewhere. It is naive to imagine him collecting in the field from harpers and singers. We know that some of Lee’s 1788 printed tunes were copied from John Carolan’s printed book of 1747-8, both treble and bass. As far as I know, no-one has yet done a good study of the sources and transmission of this material. Sandra Joyce’s article ‘An Introduction to O’Carolan’s Music in Eighteenth-Century Printed Collections’ in Irish Musical Studies 4 ed. P.F. Devine & H. White 1996, is only a brief overview, concentrating more on English publications, and repeats Gráinne Yeats’s mistaken notion that the basses of the type seen in John Carolan’s book might be harp-style (we have good testimony that these basses were composed after Carolan’s death).

When I visited Alderford in the year 1840, the family mansion of the M’Dermot Roes, I learned that when the house was burned, soon after Carolan’s death in 1738, a vast number of his songs were destroyed

What were these “songs”? Manuscript books of Irish song texts? Or does this represent a collection of manuscript keyboard settings of Carolan’s tunes? It is not clear.

But if we accept the existence of this other independent strand of the transmission of Carolan’s tunes, then we could understand Bunting’s version of Miss Dillon as a synthetic amalgamation of a harp version and a keyboard version. Bunting could have sat beside a harper and notated the dots for the first two sections, and perhaps also the jig; and then later used a printed or manuscript keyboard setting of the tune as his inspiration to complete the tune by adding his own neatened sketch of the 3rd section.

For completeness, I should mention the version of the tune on p.32-3 of TCD MS 10615, compiled in Scotland in 1816 by by Anna-Jane Maclean-Clephane and said to derive from the playing of “O’Kane”, presumably the Irish harper Echlin O Catháin.

Bunting’s tag in his annotated copy of the 1809 book, “Insert anecdote of the Dillons Earls of Roscommon” could derive from Hardiman, but the title in the MacLean-Clephane manuscript “Miss Dillon of Loch Glen, Roscommon” is an independent witness of the connection of this tune to this family.

However, as Donal O’Sullivan pointed out (Carolan 1958, vol 2, p.23-4) this information does not quite add up. “Fanny Dillon” (DOSC 37) was composed for a completely different family, as proved by its words and tune together in Cody’s song-book (QUB SC MS4.6). O’Sullivan suspects that Councellor Dillon (DOSC 38) was not one of the Dillons of Lough Glynn, but from another branch of the family.

Donal O’Sullivan tries to collate all these titles but ends up dismissing the “Miss” and the “Rose” to suggest this tune is for Richard’s wife, Lady Dillon, nee Lady Bridget Burke. He admits the possibility that the tune is for their daugher, Lady Frances Dillon, but he gets confused about Rose – the Peerage says she was the great-grandmother of Richard.. She fits all the names: “Miss”, “Lady” and “Rose” but she seems to be a couple of generations too early.

Lady Frances seems to have had a short sad life. Assuming she was born after the marriage of her parents in 1720; married to her father’s cousin (20 years older than her) Charles 10th Viscount Dillon in 1734/5; they had a son in 1738 who died six months later, meanwhile they had gone to London where she died in the winter of 1738-9 and her husband died in 1741.

There don’t seem to be any words; I think this may be a purely instrumental harp piece.

For my video demonstrations as part of this project, I want to focus on understanding and realising the initial dots layer of live transcription from the harper tradition bearer. This means I am always looking for later editorial interventions to ignore. For this tune, much of section three seems to be wholly editorial with no underlying dots, and so I feel the best way I can present a demonstration of the underlying live transcription is by playing just the first two sections. I will leave the reconstruction of the entire tune to another time…