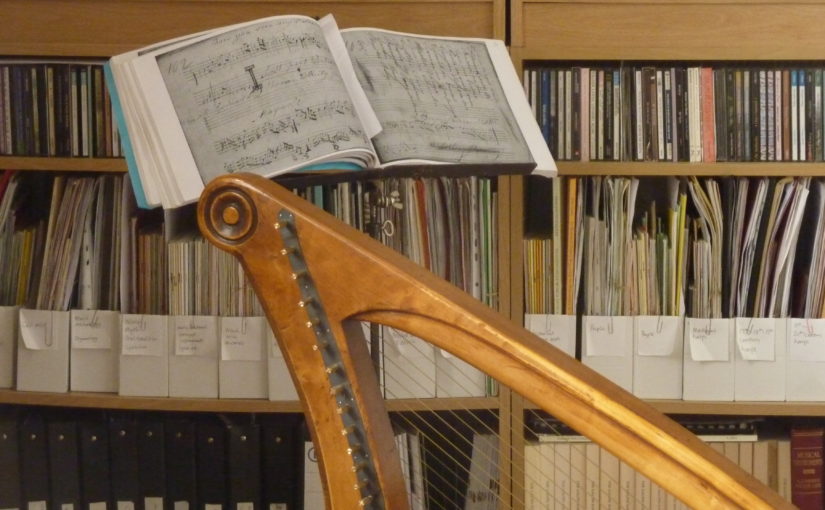 I made a video demonstration of the tune of “Bonny Shannon Water” from Edward Bunting’s manuscript notation which I think was written as a live transcription from the playing of an old Irish harper in the 1790s.

The one I am playing from is on QUB SC MS4.29 p.103/99/108/f49r and is titled “Bonny Shannon Water. This page also has an interesting tune list which does include the phonetical Irish title “Rosha veg voaver”. These title lists are very enigmatic and could do with a statistical and linguistic survey all of their own! I have transcribed a lot of them on my Old Irish Harp Transcriptions Project Tune List spreadsheet, but this could be a good project for someone else.

I assume that the tune was written later than the list, since it seems to be fitted into the spare space at the bottom of the page. Bunting has titled the tune “Bonny Shannon Water” and he has also written his brother’s name, “Anthony Bunting”.

Off-the-wall question: Did Anthony do some of this collecting? Are notations like this actually in Anthony’s hand, not Edward’s?

The notation looks clear and straightforward in the main. It seems to have been created as a dots-only live transcription, which has then (perhaps straight away) been elaborated with the addition of note stems, beams, and barlines. There are a few places where dots have been crossed out, and there is a bit of a mess at the half-way point where notes are over-written and a “tr” mark has been added. It’s not entirely clear to me what is going on at that point.

The other live transcription is in QUB SC MS4.29 p.23/23/032/f11r. This one is much more difficult to understand, and when I was working through this early section of the manuscript a few months ago I just skipped this transcription because I couldn’t make enough sense of it.

Bunting starts transcribing on the first line of notation, starting in A major. He kind of gets half way along and then starts the second half in a different key. Then he starts on the second line of notation with the beginning of the tune again, but transposed down a note lower, starting on G. This time he gets further, but again he has flipped into a different key, finishing the tune at the beginning of the third line of notation in D major. Then he draws a double bar line and starts the tune again, more determinedly, in the key of E major, and this time he also adds bar lines. The second half of the tune moves onto the fourth line of notation and again it all goes to pot, with notes scribbled out, but he rallies and manages to finish the tune with notes with stems (but no barlines) in the same key that he started. Success!

On the previous facing page, p.22, there are neat copies of two tunes. The first is a neat coppy of “Mrs French or Miss Fanny Power”, which looks like it has been copied out of a printed book or a neat manuscript. The second is our tune, titled “The Bonny Shannon Water”. What does this notation represent? Is it Bunting’s attempt to make a neat edition of the transcription dots disaster on p.23, or was it copied from a printed book or manuscript?

I think it is quite possible that Bunting made neat copies of tunes from printed books or manuscripts into his collecting pamphlets, which he then took with him on his collecting trips, to see how they compared with what the harpers played. Is that what is happening here?

Either way, Bunting has edited his neat copy, crossing out rests in each bar to convert it from 3 time into 2 time.

Bunting made a piano arrangement of this tune and he included it in his spring 1796 proof sheets (see Peter Downey’s 2017 book). Bunting re-printed this arrangement in his published Collection in 1797, as no.43 on page 24. You can listen to Bunting’s classical piano arrangement on Fiachra Ó Corragáin’s website. I think that the piano arrangement is not exactly derived from either of the transcriptions, but I wonder if we can tell on musicological grounds how much it draws on each of them? That would have implications for the dating and provenence of the two transcriptions.

Date and source of the transcriptions

Almost 50 years later, in the late 1830s or early 1840s, Bunting wrote into his own personal copy of the 1797 print “Harp Higgins perfect” indicating that he thought he had collected the tune from the playing of harper Hugh Higgins. (I think “perfect” indicates that the tune has all 7 notes of the scale; Bunting was obsessed with finding gapped scales). We know that Higgins died in 1796, and we also have the Spring 1796 proof sheet, so any transcription that was a source for this piano arrangement must have been done in the summer of 1792 (based on what we know of Bunting’s collecting trips).

Certainly the MS4.29 p.23 dots transcription looks like the kind of thing Bunting might have been doing in the summer of 1792, when he was still grappling with the old Irish harpers’ style and idiom and the mechanics of making a live transcription. Is this transcribed from Higgins’s playing? Are the differences between the dots transcription and the piano arrangement due to Bunting relying on other people’s earlier printed arrangements of the type he may have copied onto p.22?

Title and other versions

This tune seems to have two titles, “The Bonny Shannon Water” and “An Róise bheag mhodhamhar”. We only have Bunting’s phonetic approximations of the Irish title, “voavir” or “voaver”. In the 1797 print, Bunting gives this as “mhómhar”. Donal O’Sullivan discusses this briefly in his Bunting part II p.23. He gives “mhodhamhar” for “gentle” i.e. the gentle little Rose, but he also says that there may be some confusion with the Irish “foghmhar”, harvest, which would explain Bunting’s published English title “The little harvest rose”. More work could be done on this.

There are other later versions but I think they mostly derive from Bunting’s 1797 publication. O’Sullivan refers to an apparently independent variant titled “Rose Ward, or Róisín Ní Cuirnín (Rose O’Curnin)” in Joyce, 1909, no.581, p.304.