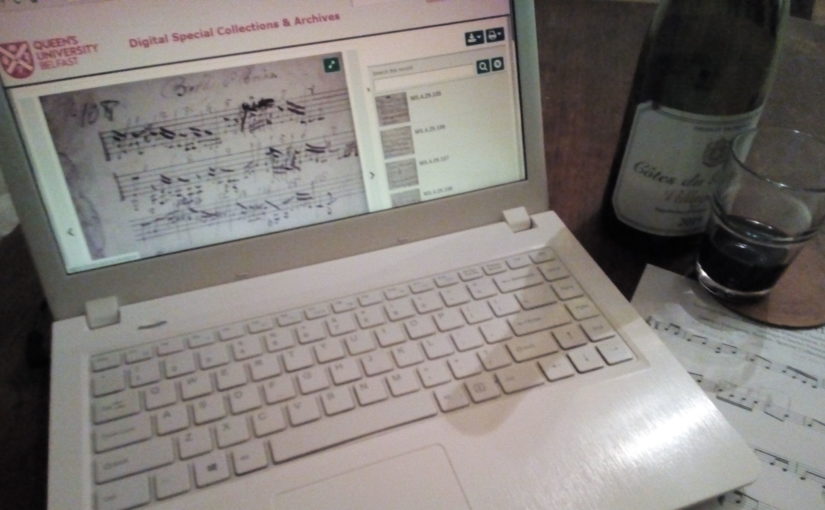 I was going to make a video demonstration of Edward Bunting’s live transcription of the tune of Betty O’Brian, but I didn’t because it is too corrupt.

Edward Bunting made this live transcription from the playing of an old Irish harper in the 1790s, in one of his little pocket transcription pamphlets. It was subsequently bound up with a load of other transcriptions and jottings, and you can see a facsimile of the page online: Queen’s University Belfast, Special Collections, MS4.29 page 108/104/113/f51v.

The tune is in C major; there are no Fs at all in the tune, and very few Bs. This is what we would expect; a C major pentatonic scale has the notes C, D, E, G and A.

At a number of places in the tune, Bunting has written either “B” or “8” below certain notes. This is his normal way of indicating in a transcription that these are bass notes, sounded an octave lower than written. This in itself demonstrates that this notation was transcribed from a harper. I can see B or 8 written in the second half, in bars 1, 2, 3, 14 and 16. (the B and 8 in bar 2 are obscured by the bar number and ornament sign of bars 10 and 11).

There are three places where there seems to be two notes at the same time, joined by a common stem: bar 1, bar 5, and in the second half bar 4. Are these harmony notes? Alternative notes for different repetitions? Badly corrected errors? I am not sure.

The big problem with this notation, and the reason I can’t work it out, is that Bunting has overwritten this notation. I think there are basically 2 layers of writing on this page.

The first layer of writing is the live transcription dots. If you look at, for example, the note heads in bar 7 of the 1st half, and bar 15 of the2nd half, you can see this kind of light tight dot formed by a jab of the pen.

I think there was a second pass over the notation, perhaps immediately afterwards, when Bunting made stems for the notes. You can see these light upwards strokes connected to the light point note-heads.

The first thing I think he did for this second layer of notation was to add in beams and barlines, to group the notes into rhythmic groupings. He struggles from the start, as we can see by his bendy barlines. For example, he starts by grouping the first three notes together with a beam, A-G-E, but then he changes his mind and draws the barline at a funny angle through the beam to make the E the first note of the bar. The barline between bars 1 and 2 is even worse; it is at such a crazy angle that Bunting writes a + sign above it to show it really is a bar line. Or is the + sign to show an ornament on that G? He uses the + sign to mean both things elsewhere so it is hard to know.

In a couple of places it almost gets too much for him. Bar 6 of the first half has stems going upwards, which have been beamed, but he has scribbled these beams out and made new downwards stems with a different beaming pattern. In the second half, bars 5 and 14 get so messy that he writes neat versions below to show what he is thinking instead of trying to fit the notation on top of the transcription dots.

There are also some extraneous notes which look like they are part of the first layer, but which get squeezed out of the second layer. In the second half bars 10 and 12 there are three notes in each bar, but the first has in both cases been ignored and the over-writing shows just two. You can see similar things happening elsewhere by looking for those wispy first-later stems pointing up.

We are missing bar 8 of the second half – I wonder if it is hidden down the inner margin of the book.

I believe that the first layer – the point dots and the wispy stems, are Bunting’s live transcription, written at speed live from the playing of the harper. However, even if he immediately started working on the second layer, I believe this is him starting to engage his piano brain, to start imagining how the tune would fit into his piano world. And even if he is trying to keep close to what the harper played, he is not managing very well. He has not got the tune working properly.

At the end of the day, Bunting seems to have come to the same conclusion as me. This notation is corrupt. He did not take this transcription anywhere else; he didn’t develop it into a piano arrangement. Instead, he found a different version that he could understand better, to work with instead.

Bunting made a completely separate transcription of a different version of this tune from a different live performance presumably by a different tradition bearer, perhaps a harper or perhaps a singer. The other transcription is on QUB SC MS4.29 page 186/184/193/f91v. The title there is “Catty O Brian” but it is clearly a version of our tune. It has very few barlines, and seems to be incomplete.

Bunting used this p.186 transcription as the basis of a piano arrangement that he published as no.38 in his 1797 book. He says there that it is by Carolan, and this might be the only piece of information connecting this tune to Carolan. This version is what Donal O’Sullivan used in his 1958 Life Times and Music, where the tune is no.111.

I will try and make a demonstration of this version when I get to that part of the manuscript in a few months time!

There is also a pipes or vocal version of our tune written by the piper James Cody, which is in QUB SC MS4.5 page 6, but I haven’t seen this manuscript.

In the annotated copy of the 1797 book (BL Add ms 41508), Bunting added tags connecting tunes to harpers. He probably did this in the early 1840s, after his final book was published. Beside our tune he writes “Harp Fanning”, suggesting that Charles Fanning was the source of this tune.

This tag was written almost 50 years after Bunting’s collecting trips in 1792 and 1796. Did he really remember accurately? If so, do we believe that this tag means that Bunting notated the other, p.186 notation from Fanning? Or is it our version with its prominent bass markings, that was taken from Fanning? I don’t know any way of knowing, really.

Is there any hope?

Maybe if we could do some kind of multispectral imaging of the page, we would be able to properly untangle the layers of writing. Perhaps if we did a rigourous source-criticism analysis of the other transcription, and of Cody’s version of the tune, and of the lyric that Donal O’Sullivan suggests might go with this tune, we might get enough insights to be able to make a speculative realisation of this intriguing harp version. I think it could be very nice; the right hand bass bumps and the interestingly different curl of the melody.

But that’s not my mission at the moment, with the Old Irish Harp Transcriptions Project – I am just trying to find clear transcriptions that I can play through fairly simply, as a way in to understanding the old Irish harp repertory and style.