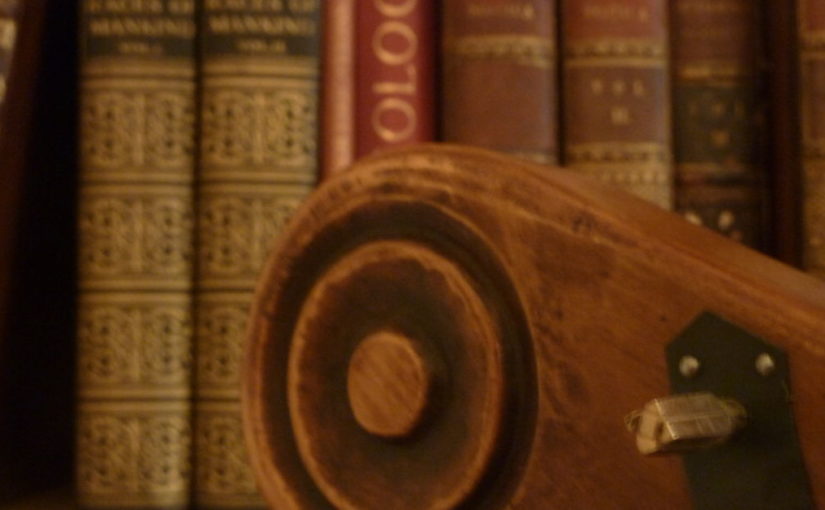 I done a video demonstration of the tune “Miss Hamilton”, as apparently noted down live by Edward Bunting from the playing of an old Irish harper about 220 years ago.

The earliest appearance of this tune may be in William McGibbon, Scots Tunes, Book 1, p. 18. This collection was originally published in 4 parts between 1742 and 1746. The reproduction below is from Bremner’s c.1759 reprint:

McGibbon studied music in London and in Italy with William Corbett; he returned to Edinburgh after 1720 and was principal violinist in the orchestra there. You can see that his arrangement of Miss Hamilton’s Delight is quite classical in style.

In the early 1750s, James Oswald published the tune in London. Oswald was a compiler, collector, composer and he often composed new tunes as “pastiche” of traditional Scottish music, sometimes even passing them off with false attributions. Our tune is on page 17 of volume 4 of his greatest collection, the Caledonian Pocket Companion, and it is titled “The Blossom of the Rasberry”. As well as the tune, Oswald gives us a florid variation, and then a jig at the end. John Purser has identified the jig as appearing elsewhere in Oswald’s book under the title “The Lads of Nairn”. It seems reasonable to suspect that Oswald composed the variation; maybe he composed the entire thing?

Robert Burns used quite a few of Oswald’s tunes for his songs. The Scots Musical Museum was published by James Johnson in six volumes between 1787 and 1803. Burns joined the project for the first few volumes, and the books presented new song-poems in English or Scots written by Burns and others. Our tune appears in 1788 as no.176 in volume 2, with the poem “Since robbed of all that charmed my views”, with the useful tag “Tune: Miss Hamilton’s Delight”.

In his handwritten annotations to his own copy of the Museum, Robert Burns (cited in works p351) says “The old name of the air is, The Blossom O’ The Raspberry. The song is Dr. Blacklock’s”.

These early prints must have been influential on later collectors and literate musicians. We don’t have a good list of books that Bunting had access to, but there is an incomplete copy of the Caledonian Pocket Companion kept with Edward Bunting’s papers in Queen’s University Belfast, Special Collections, MS4.1 and MS4.3, as well as a partial copy of McGibbon’s Scots tunes at MS4.2. It is quite possible that Bunting knew these books and could have used their settings of our tune in his work.

The 18th century Scottish sources title the tune either “Miss Hamilton’s Delight”, or “The Blossom of the Raspberry”.

Bunting says on the 1840 introduction p.99 that it is called “ineen-i-Hamilton”, and “Hamilton’s Daughter”. We get a different Irish version of the title in the index index p.v, where he writes “Nanniudh Hamultún – Neeni Hamilton – Miss Hamilton”. Pádraigín Ní Uallacháin suggests that these are all corrupt versions of Iníon Uí Hamilton (i.e. Hamilton’s daughter). O’Neil (1903 no.1830, p.344) makes the same assumption, titling the tune “Inghean ui Amiltuin”.

Edward Bunting’s classical piano arrangement was published on page 79, and the index p.ix, give us the title used today: “Miss Hamilton”.

Who was Miss Hamilton?

Bunting says on the introduction p.99 that he doesn’t know which Miss Hamilton the tune was composed for, but it may be “one of the Killileagh family”. I don’t know if Bunting had some traditionary hints, or if it is more likely that he was just making this up, since Killyleagh Castle is the most prominent Hamilton seat.

It would be nice to find a Hamilton connection to Lyons’s patrons, the Earls of Antrim. Should we understand “The Blossom of the Raspberry” to be some kind of honorific title given to Miss Hamilton herself?

Other tunes with the same title(s)

I should briefly point out that these titles appear over other unrelated tunes, but some of these have mistakenly come into the indexes. Bunting prints a completely different tune called Ógánaigh Óig / The Blossom of the Raspberry, in 1797 (no. 51) and 1809 (p.11). There is a tune in the MacFarlane-Young fiddle manuscript, c.1740 (Edinburgh, NLS MS 2084) titled “Miss Hamilton” but I don’t think it is related to our tune.

Two pages before the transcription, Bunting has written a little tag “Miss Hamilton by Lyons” on QUB SC MS4.29 page 149. It doesn’t seem well-written and may have been corrected from something else. Do we understand this to be a transcription of a fragment of traditionary information from a tradition-bearer informant? Or is this Bunting making a note to himself based on his reading in printed books? How can we decide?

Bunting’s piano arrangements in 1798 and in the 1830s also attribute the tune to Lyons (see below), saying that he was harper to the Earl of Antrim, and sometimes specifying that the tune was composed in 1702. We also have the same information from Edward Bunting’s 1840 book. He explains (intro p.70) that it was composed by Cornelius Lyons, and that it was the “only one of his melodies” that was preserved. However it is not clear where Bunting got this information from. Arthur O’Neill in his Memoirs gives a list of tunes attributed to Lyons, and he does not mention Miss Hamilton. I wonder if Bunting was too keen to make up attributions sometimes? I have suggested before here that I don’t believe Bunting’s attributions of Slieve Gallen and the Friar and Nun to Lyons. I would like to see corroboration from another source.

To be honest, I don’t see much similarity between the tune of Miss Hamilton, and the big Lyons variation sets such as Lady of the Desert or Callena Vacca. But I do see similarities between Miss Hamilton and other tunes composed by James Oswald.

The tune notation is similarly confusing. Though we can see what looks like a straightforward notation of the tune, with numbered bars in two groups of 16, we can also see that the beginning of the tune has been edited – bar 3 is crammed in almost on top of bar two, and then has been re-written much more neatly and clearly further to the right. We can also see that there are the remains of crossed-out dots hidden beneath bars 1-4. These dots seem to outline the beginning of the second line (corresponding to bars 9 to 13).

Bar 12 of the second half is confusingly notated. As written it seems to have too many beats. I wonder if this is an attempt by Bunting to show a kind of parallel bass / treble movement, and that is how I have interpreted it in my demonstration. We have the same kind of grace-note figure in bar 14, but without the bass notes.

There are quite a few + and gracenote marks; some seem to be later additions written in a lighter ink.

The transcription does not include any kind of section break or repeat marks. I don’t know if this is significant. Other versions indicate that either the first half, or both halves, are to be repeated.

Bunting made quite a few manuscript piano arrangements of this tune, and each one has a different tag saying who he collected it from.

Bunting’s unpublished “Ancient and Modern” which is dated 1798, included a piano arrangement of “Miss Hamilton Composed by Lyons”. At the bottom it says “From Hugh Higgins”.

If you compare the tune in this piano arrangement with the tune in the transcription on MS4.29 page 151, you can see that there are differences – the piano version is set in 4/4 whereas the transcription is barred in 2/4 with twice as many barlines. Also, some of the more angular turns in the tune have been rounded off to make this version of the melody much more sweet and flowing and keyboard-style.

In the 1830s, someone else was compiling big piano albums which I think fed into the 1840 printed book. These are now QUB SC MS4.13 and QUB SC MS4.27. These are not in Bunting’s handwriting; but I don’t know who write these two albums. The piano arrangements in them include quite a lot of corrections or changes in different hands; and they also include a lot of attribution tags. “Miss Hamilton” appears in both, with different attributions. In MS4.27 page 25, it is tagged “from O’Neil in 1803” according to Colette Moloney’s introduction and catalogue p.323. Moloney also transcribes commentary from this page, giving an impressionistic account of Lyons. I have not seen this page.

In MS4.13 page 13, our tune is tagged “From Paddy Linden the harper in 1802”. The tune as given here is similar to the MS4.33.3 piano arrangement but the first two bars of the second half have been changed to make them even more smooth and pianistic.

The bottom of this page also includes pencil text which I can’t make out, though I think it is probably a similar text to what Moloney transcribes from MS4.27 p.25.

Bunting finally published a piano arrangement in 1840, no.107 on page 79. The index p.ix repeats the attribution “Patrick Linden, 1802”, and the first two bars of the second half of the tune have the same smooth shape as in the MS4.13 arrangement.

How do we understand these attributions to Linden in 1802, O’Neil in 1803, and Higgins (in a book apparently dating from 1798)? None of these piano arrangements truly respects the transcription notation; all seem to be adjusted for keyboards, rather than any of them reflecting independent variants from different informants. Art these tags just myth-making? Are they based on tune lists and repertory lists, not necessarily connected to actual transcription notations or performed variants?

We can use my tune list spreadsheet, and my MS4.29 index PDF to see how the transcription sits in the wider manuscript collection. “Miss Hamilton” on MS4.29 page 151 seems to sit at the end of a gathering which contains other tunes sometimes tagged O’Neil. But I have mentioned before the danger of circular reasoning – none of the other transcriptions in this section are securely connected to Arthur O’Neil, and so by putting his name with a question mark by this tune we risk creating an artificial group. I think that at this stage we cannot really say who this transcription may have been noted from, or when. My guess is that its more confident notating style may suggest 1796. But really we don’t know.

I do think that the notation in MS4.29 page 151 does look like a live “dots ” transcription that has been over-written with stems and bars and neatened sections. But I am losing confidence in everything else. Was it noted from a harper, or from a fiddle or even a keyboard performance? Was there any traditionary information associated with the tune? Was it “gan ainm” and Bunting inserted the title below later from his printed books? The more we work at this stuff, the more we call into question…

One thought on “Miss Hamilton’s Delight”