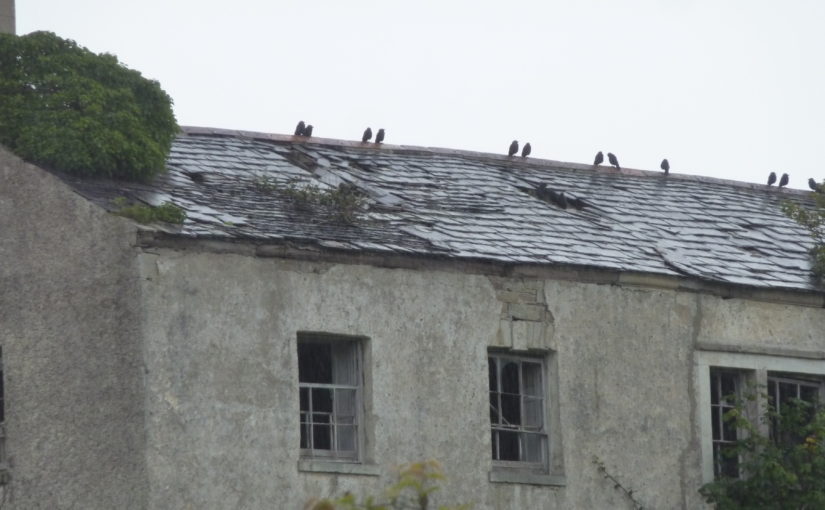 In Queen’s University Belfast, Special Collections, MS4.29 page 20, there is a line of dots which I have always marked as “unidentified tune”. I just could not work out what is going on here.

However Sylvia Crawford has analysed the mode of the dots and suggests that they represent Bunting’s first attempt to transcribe a harp version of the tune of DOSC 60 Colonel Irwin.

You can download my PDF typeset version of the dots, which I used to create the machine audio.

In my typeset version, I have divided the dots into three sections, separated by gaps. It seems to me that the first section is kind of the same as the first section but a 4th lower. I think that we can read these dots as coming to an abrupt halt at the end of this first section, and re-starting a 4th higher and then continuing at that pitch level through to the end of the line. However I think the tune breaks off abruptly again there.

This transposed repetition of a passage is a thing I have seen before in these manuscripts, that Bunting changes the key he is transcribing a tune in, part way through the dots notation. A very clear example is the dots transcription of Bonny Shannon Water on page 23 of the manuscript. I think that it is a transcription error; either the informant stopped the tune and restarted in a different key, or more likely Bunting started transcribing in the wrong key and then stopped and restarted at a different height on the staff.

I think there are two likely bass notes towards the end of the dots notation. I have marked them on my typeset version as an octave below the preceeding note, but they are just floating in the air below the staff so they could be anything. There are also three blobs under the last two or three notes which might be “B” markings subsequently deleted. There appears to be a deleted dot overwritten by the first blob.

There are other notes which seem slightly ambiguous, as if they are not quite on the line or on the stave; there are also notes that appear to be deleted by having a line through them. I am especially unsure about the two dots with horizontal lines through – these could be middle c, but I have interpreted them as deleted notes.

This out of mode passing 3rd, F(♯) in the first section, B in the second, is a distinctive feature of this tune. The out-of-mode third in a neutral mode scale pushes it towards being minor or major; often in neutral tunes there is a kind of minor sound, and arrangers (like Bunting) will often set them or harmonise them as if they were in classical minor keys. However it seems to me that this tune is perhaps more likely to have a major out-of-mode 3rd which would give it a distinctive sound, more typical of G neutral tunes.

At the top of the page, Bunting has written two different titles: “Colonel Irwin” and “John Drury Kingsland”. We can recognise these titles, as the titles of two different neutral-mode Carolan tunes.

The first title, “Colonel Irwin”, clearly relates to the neat copy notation which is written below our dots. Sylvia Crawford suggests that our dots are an abandoned first attempt to transcribe a harp performance of the tune of Colonel Irwin. She suggests that Bunting gave up, and instead copied a neat classical setting of the tune out of a published or manuscript tune book.

The neat copy of Colonel Irwin

Bunting has written a neat copy of the tune of Colonel Irwin underneath our dots. We can recognise it as a neat copy and not a live transcription, because of the way it is neatly written, with carefully written spaced out note heads, beams and barlines. We also can see that it is in a neatened-out, classical style. There is a flat sign for the high b♭ in the second bar of the second system of the tune (while all the other low Bs in the tune are natural); flattening this high b would be characteristic of playing this kind of tune on keyboards or violin, but not on harp.

Bunting would certainly have had access to previously published keyboard arrangements of this classical version of Colonel Irwin. If we check my Carolan Tune Collation Spreadsheet, we can see that the tune was first published in the 1770s, in the Collection of Carolan tunes published by Lee and reprinted by others including Hime through the late 18th century. This tune is titled “Colonel Erwyn” by Lee; it is untitled no.51 in the Broderip & Wilkinson reprint.

Gráinne Yeats (‘Lost chords’, Ceol 7, 1984) flags this tune in Lee as potentially one that was copied from the (now incomplete) John Carolan book published in around 1747-8 (Dublin, National Library of Ireland, LO 1635), which we also know Bunting had access to at some point.

Bunting made two piano arrangements of Colonel Irwin, the first in QUB SC MS4.33.3 p.14 titled “Colonel Irwin by Carolan from Charles Byrne County Leitrim” and the second in his 1809 collection p.39 titled “Corneul Irbin / Corneul Irbhín – Colonel Irwin”. In his annotated copy of the book, Bunting has written “O Neil” to indicate his attribution, and at the bottom he has written “This excellent imitation of a Highland air, by Carolan, to ingratiate himself with Colonel Irwin who was a Scotchman, is a proof of the versatility of his genius”.

I think that both of Bunting’s classical piano arrangements were derived from the neat copy on MS4.29 p.20.

There is a Carolan song lyric addressed to Colonel John Irwin of Tanrego.

Unfortunately, in his Carolan (1958), Donal O’Sullivan got hopelessly mixed up. He took the lyrics addressed to Colonel John Irwin of Tanrego, and then connected them to a completely different tune, DOSC 59. Unfortunately for him, DOSC 59 is usually titled “Planxty Irwin” and is said to have been composed for the Irwins of Streamstown House. My guess is that Donal O’Sullivan did not understand the neutral mode structure of DOSC 60 Colonel Irwin, and so he sidelined it in favour of the sweetly major-mode “Planxty Irwin”. He even went so far as to re-name DOSC 59 with his own invented title “Colonel John Irwin”. O’Sullivan didn’t have access to Bunting’s annotated 1809 volume with the Streamstown information, which would have helped him get the two tunes the right way around; and unfortunately his titles and associations have gone firmly into the tradition.

Thady Connellan (An Duanire Fonna Seanma, 1829, p.43) published a very interesting set of the words titled “Coruidhneul Iormhuin a ttonrego / Colonel Irwin, County Sligo, by Carolan”, with two verses in Irish and then a metrical English translation “by a certain poet”. The English translation is written in Irish orthography, and printed in Gaelic script. Thanks to Siobhán Armstrong for help with this.

Ue mhill tace our mhadh mhithout deladh
To see a Noble, brabhe and gadh
The gallant Colonel near the sea,
Him I mean to treat of;
Uith mirth and iodh, he fills his glasses,
Delights to chear both lads and lasses;
This is John I mhill ansmhear,
The Brabhe English Irelander.

Patrick Lynch collected a set of words from Owen MacMurray in Killargy, Co. Leitrim, in the summer of 1802. You can see Lynch’s quick copy of these words on QUB SC MS4.26.19ar, and his English translation is on the opposite page, QUB SC MS4.26.19aq. Lynch made a neat presentation copy of the words in QUB SC MS4.10.099 titled “Planxty Erwin / Plaingsti Eirmhin”. These are the words that Donal O’Sullivan printed and translated and mistakenly set to the wrong tune (DOSC 59) in his Bunting part IV, 1932, p.20-21. Another English translation I think done by Thomas Hughes is in QUB SC MS4.14.132

The tags for the tune of Colonel Irwin (DOSC 60), and for the song lyrics, both make it clear that they are addressed to Colonel John Irwin of Tanrego. Tanrego House is in Tanrego townland, in county Sligo. Arthur O’Neill visited Tanrego in the later 18th century, and tells us:

…I went from thence to Captain Irvine’s of Tondrago Co Sligo a finished Gentleman, he was a
Captain of volunteers for 16 years and in the Queen of Hungary’s Service he distinguished
himself as an Irishman not inferior to the Celebrated Count Lacy.

Colonel John Irwin was born in 1680. His grandfather, also called John, had been an army Commander under Cromwell, and had come to Ireland during the Cromwellian wars in 1649, and settled in Sligo. (R.W. Walsh, JRSAI 75 no 1, Mar 1945)

We have two attribution tags for the tune of Colonel Irwin (DOSC 60). In the 1798 “Ancient and Modern” piano manuscript, on QUB SC MS4.33.3 p.14, Bunting says “from Charles Byrne County Leitrim”. I don’t know if this tag was written in 1798, or later. I assume the “County Leitrim” is telling us where Byrne was from, and not where Bunting made the transcription.

Over 40 years later, Bunting wrote “O Neil” against this tune in his annotated 1809 book. I presume he was working from memory at this point, or possibly even just making it up.

If we check my Tune List Spreadsheet, we can see that other transcription notations on adjacent pages are also tagged as being collected from Charles Byrne. I also note that Byrne is give as a source of a number of these “mixed” transcriptions where Bunting jumps between different transcriptions when he is doing the dots.

Charles Byrne was not considered a good player of the harp. The harper and tradition-bearer Arthur O’Neil used the phrase “tol-lol” to describe the least musical and worst players of the harp; he describes poor Byrne as “worse than tol-lol” (Belfast Central Library, F.J. Biggar archive, envelope V6). And the harper William Carr said that Byrne “played worst” of all the other harpers he had met. We are told that Byrne was originally just the servant to his uncle, who was a harper. Byrne would carry his uncle’s harp for him. It seems that he took the notion to learn to play, but it also seems that he may have been self-taught, without the training and tuition required to play well.

However Bunting seems to have been taken by Byrne’s store of anecdote and story, and also says he was a good singer with a lot of songs. Did Byrne sing a version of Colonel Irwin for Bunting? Did Bunting struggle to notate the unusual neutral mode melody from Byrne’s singing (or worse, from his wayward harp playing)? Did Bunting give up after one line of dots, and instead find a neat classical printed keyboard version somewhere on his travels, which he could copy into his little collecting pamphlets instead?

I think I am kind of happy to present these dots as a very incomplete and corrupt version of the tune of Colonel Irwin (DOSC 60).

However I do think the dots are too incomplete and too corrupt to be much use in trying to reconstruct a traditional performance version.

I also think that the neat classical version of the tune are also corrupt, but in a different way – they have been smoothed out too much, by arrangers who didn’t really understand the traditional style or the neutral mode.