I realised it would be somewhat hypocritical of me to recommend my new Trinity College & Queen Mary harp stringing and tuning schedule, with na comhluighe (the sisters) at middle c, if I didn’t put it onto my replica of the Queen Mary harp.

So, last Sunday’s work was to remove all of the old silver trebles and gold basses, and put on the new brass trebles and silver basses according to the new scheme.

END_OF_DOCUMENT_TOKEN_TO_BE_REPLACED

I have been preparing the harp for some work I am planning on it. END_OF_DOCUMENT_TOKEN_TO_BE_REPLACED

END_OF_DOCUMENT_TOKEN_TO_BE_REPLACED

I have been making silver harp strings for five years. I buy in stock silver wire and draw it down to the size required, which makes it hard as well as thin.

Today I managed to take wire-making to a whole new level. I took 5 years worth of filings and silver dust, and melted them down into a little ingot which I forged into a rod, and drew down into wire. Starting with a pile of dust I finished with a piece of 0.48mm silver wire, about 32cm long.

Unfortunately there was a flaw in the wire exactly half way along, and of course it snapped there almost as soon as I started threading it into the harp.

Using a thin metal toggle I had just enough to put one half onto the highest string of my Queen Mary harp replica. It came right up to pitch and sounds great.  Here it is, wound round one of the new iron split tuning pins: 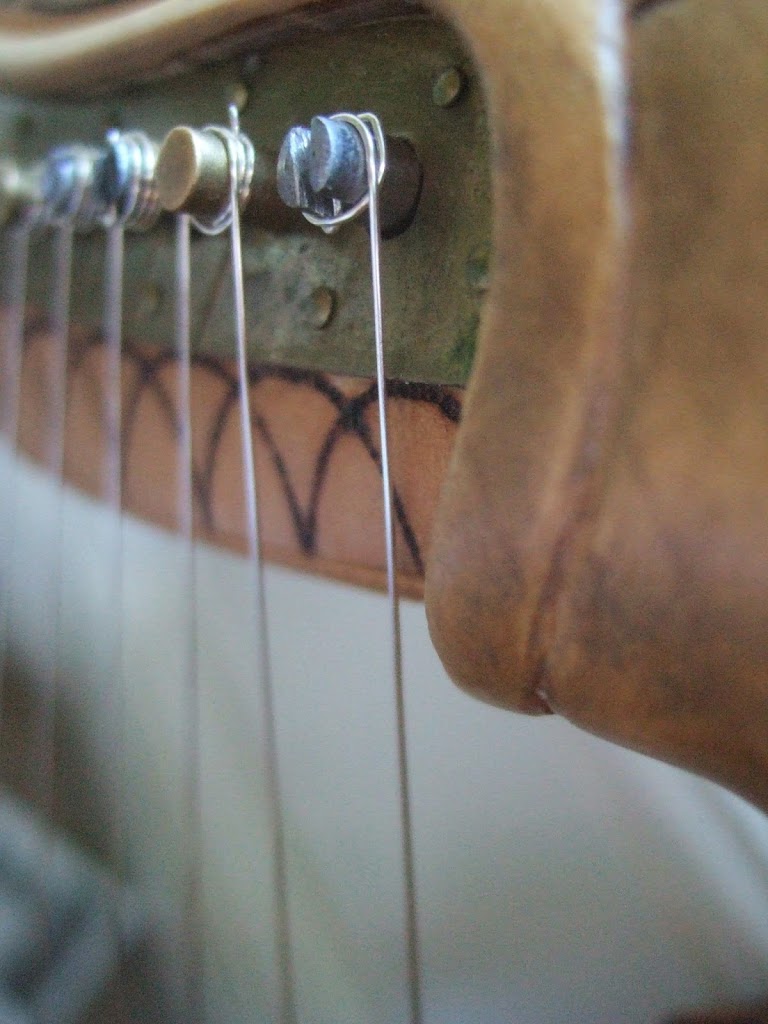 I stopped annealing it at about 2mm diameter so I rekon on this being about 75% reduction – or “extra hard”. It was pretty brittle trying to wind the toggle, which I presume is from the minute flaws and inclusions from my casting, compared to the very pure metal that is produced by the big industrial producers we usually source wire from.

Now I need to repeat the process with more scrap, trying to produce a longer and thicker finished wire…

At the beginning of January I was fiddling with the setup of my harp, as part of an ill-fated New Years Resolution to change its tuning. For the last two months I have had 10 gold, 10 silver and 10 brass strings on (nominally), which I liked because of the neatness and symmetry of the counting.

Taking the silver 3 notes higher than it ever used to be, up to an octave above middle c, must have emboldened me. The silver I am using now, and the way I am drawing it hard, seems to work very well for thinner higher pitched strings.

Also I have been pondering the Ouseley quote about the silver strings on the Trinity College harp.

So the latest scheme (pictured below) takes the silver right up to the top of the harp. The only exception is the very highest string which still has Dan Tokar’s experimental super-hard-drawn gold wire from years back. I just can’t bring myself to remove it!

The sound of the high silver is nice, more creamy and fluid that the brass. I think I always felt that the high strings on this harp were a bit pingy; I swayed between thinking that the treble end of the soundbox is too thick, or thinking that it is meant to be pingy as a contrast with the singing midrange and the roaring bass, or thinking that if I could only get the right type of brass (red brass, yellow brass, hard-drawn, latten…) then it would become perfect.

Now I will watch how these high silver strings hold up for a couple of weeks. If they behave themselves then I’ll probably keep them going for a while. 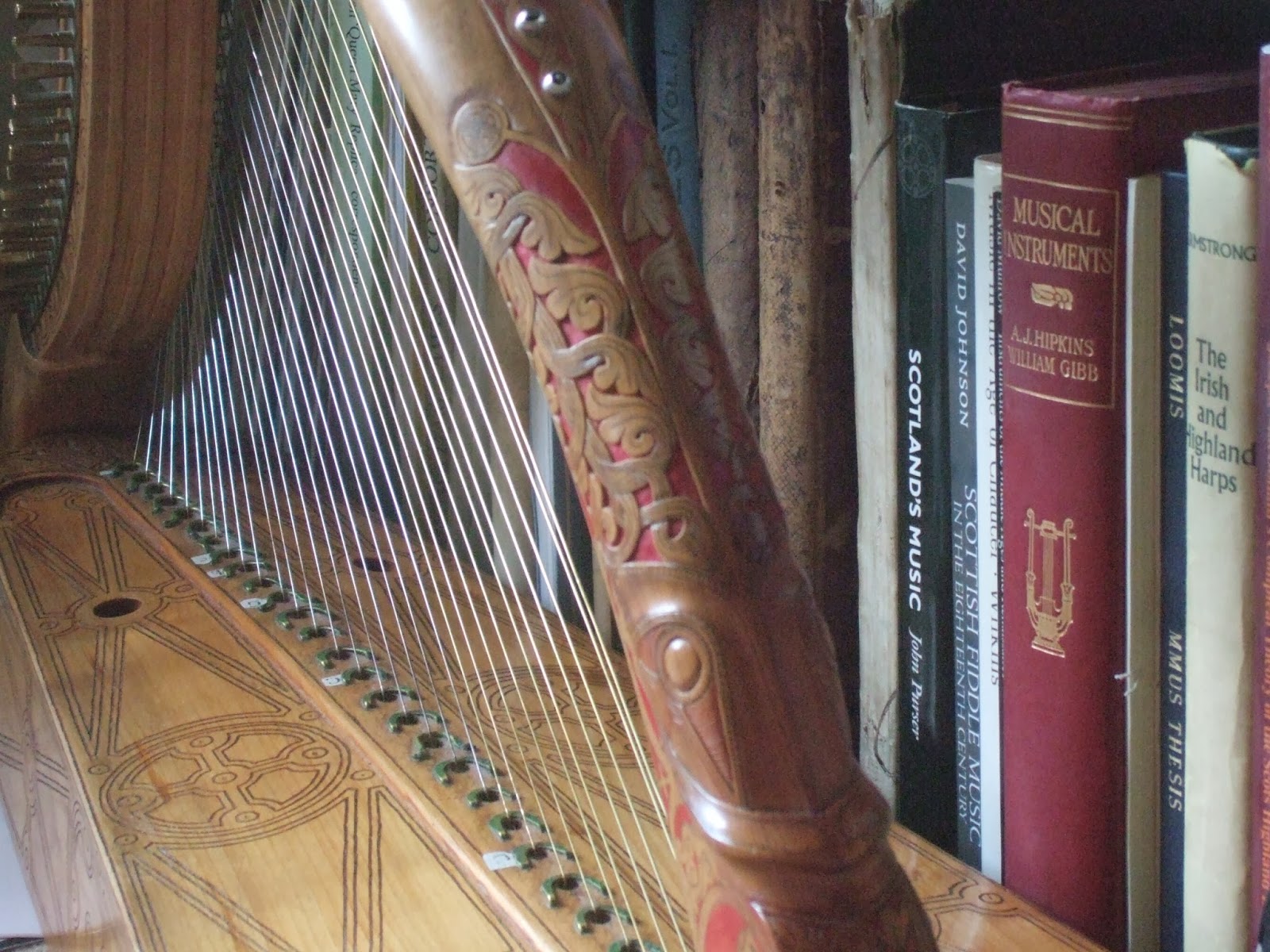 Almost! One of my very slow long term projects is to learn to recycle broken silver harp strings. I have long been drawing wire, and today I took a first step at the other end of the process – melting a bundle of broken wires down into an ingot. 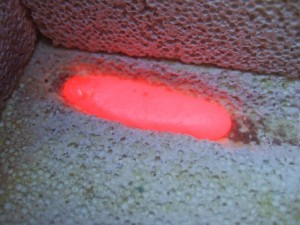 I would count this as an “interesting experiment” so far. I’ll need to do a few more melts before I have an ingot good enough to forge down into a rod ready to draw into wire.

I was browsing idly through a first edition of Grattan Flood’s The Story of the Harp in the Wighton Centre in Dundee the other week, when I came across the description of the Trinity College or Brian Boru harp on pages 41-42. An 18th century letter is quoted, giving some description of the harp:

It says “When given to Counsellor MacNamara, it had silver strings…”

The letter is said to have been written by Ralph Ouseley, who owned the harp in the early 1780s. Macnamara acquired the harp in about 1756. If this is true then it is an exciting and important piece of information both about the Trinity College harp itself, and also about the use of precious metal strings on the old Gaelic harps.

Now Grattan Flood is a notoriously unreliable author, and many of his statements can be proved false by laboriously tracking down the source documents to see what he says. Often he gives no citation or only a vage reference to “an old manuscript”. This section is given a citation though: “Bibl. Egerton, Brit. Mus., No. 74, p.351”

I contacted the British Library, and put in a request for a copy of this manuscript page. After some confusion and digging on the part of the librarians, (and a rather eye-watering fee on my credit card for their troubles) I was sent a high-res page scan of British Library, ms Egerton 74 f184. This page contains a transcription made by J. Hardiman in 1820, of the Ouseley letter, and Grattan Flood is vindicated – it really does say that the harp had silver strings on it. I was delighted that my expensive gamble in ordering the manuscript page had paid off – worth its weight in silver you could say!

So I wonder, what is the story here? Was the harp strung entirely with silver? Or did it only have a certain section of the strings left? I have seen a photo of an 18th century Irish harp (one of the Malahide / Kearney ones) which had all of its steel trebles on but none of its brass basses; brass being more valuable to remove and recycle I suppose. When were these silver strings installed on the Trinity College harp? There is no suggestion that the harp was played in the early 18th century; Arthur O’Neill in about 1760 implies that the instrument was not played for 200 years before then. Were these silver strings the remains of a 16th century setup?

The genuineness and authority of this statement from an 18th century owner of the harp makes me want to start experimenting again. How does it work to fit silver strings to the entire range? Can it be taken up to the high treble? What alloys work best for this? Ann Heymann tells me she has had a low-headed medieval Irish harp strung entirely in silver, but more experiments are needed!