[Fraoch] went southwards to his mother’s sister, that is to Boand, in the plain of Bregia; and she gave him fifty black-blue cloaks, whose colour was like the backs of cockchafers, each cloak had four blue ears [or lappets]; and a brooch of red gold to each cloak. She gave him besides fifty splendid white shirts with fastenings of gold; and fifty shields of silver with borders of gold. She gave him a great hard spear, flaming like the candle of a royal house, to place in the hand of each man of his party, and fifty rings of burnished gold upon each spear, all of them set off with carbuncles, and their handles studded with precious stones. They would light up the plain the same as the glittering light of the sun. And she gave him fifty gold-hilted swords, and fifty soft-gray steeds, on which his men sat; all with bridle-bits of gold, with a crescent of gold and bells of silver on the neck of each steed of them. And they had fifty crimson saddles, with pendants of silver thread, and with buckles of gold and silver, and with wonderful fastenings upon them (the steeds); and their riders had fifty horse-switches of Findruine, with a crook of gold upon the head of each horse-switch, in their hands; and they had besides, seven grayhounds in chains of silver, and a ball of gold upon (the chain) between each pair of them. They wore shoes of red bronze (Cred-Uma); and there was no colour which approached them that they did not reflect it. They had seven trumpeters among them, with trumpets of gold and silver, wearing many coloured raiments. Their hair was light golden; and they had splendid white shirts upon them. There were three buffoons preceding the party with silver-gilt coronets upon their heads, and each carried a shield with emblematic carvings upon it; and crested heads, and ribs of red bronze in the centres of these shields; and there were three harpers (cruitire), each with the appearance of a king, both as to his dress, and his arms, and his steed….

[While they were at  Cruachan, Ailill asked Fraoch if the harpers would play after dinner.] This was the condition of these [harps]. There were harp-bags (crotbuilcc) of the skins of otters about them, ornamented with coral, (Partaing) with an ornamentation of gold and of silver over that, lined inside with snow-white roebuck skins; and these again overlaid with black-gray strips [of skin]; and linen cloths, as white as the swan’s coat, wrapped around the strings. Harps (Crota) of gold, and silver, and Findruine, with figures of serpents, and birds, and grayhounds upon them. These figures were made of gold and of silver. Accordingly as the strings vibrated [these figures] ran around the men. They [the harpers] played for them then, until twelve men of Ailill’s and Medb’s household died of crying and emotion. 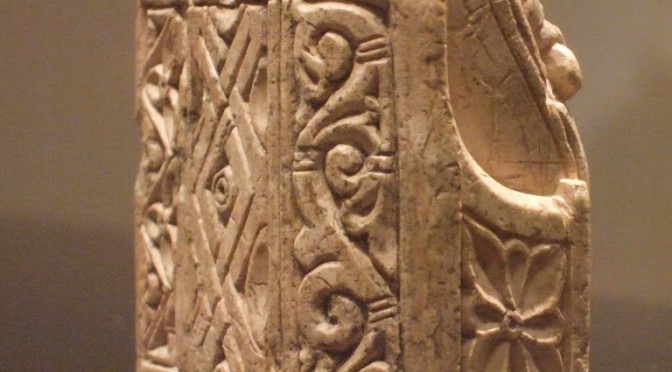 On Tuesday I visited the perhaps misleadingly titled “Lewis Chessmen” exhibition in Edinburgh. This gaming-piece here is particularly interesting – the curators suggest it is a locally-made replacement piece. The decoration on the chair back matches that on the Queen Mary harp and on other 15th century West Highland sculpture. It’s British Museum 1831,1101.82