Letter from Mendelssohn’s tour of Scotland and Wales, 25 August 1829, cited in Gelbart, The Invention of “Folk Music” and “Art Music”, Cambridge 2007 p248. A nice snapshot of harp and crwth playing together.

“Music they have, but not the harmony of the sphears, but loud terrene noises, like the bellowing of beasts; the loud bagpipe is their chief delight, stringed instruments are too soft to penetrate the organs of their ears, that are only pleased with sounds of substance”

Thomas Kirke, A Modern Account of Scotland by an English Gentleman, 1679

Today is Burns Night, so what better tune to look at than “Rory Dall’s Port”, as used by Burns for the original setting of his lovely poem “Ae Fond Kiss”.

The only source for this tune I have ever found is two publications by James Oswald. I do not know the exact date of either of these books; they are both from around 1750.

This is the famous “Caledonian Pocket Companion” (book 8, p24):

And here it is with a baroque bass for harpsichord or cello, in “A Collection of 43 Scots tunes with variations”:

This tune is often claimed for either Ruaidhrí Dall Ó Catháin or Rory Dall Morrison. On the other hand, various authors including John Purser and David Johnson have suggested that it looks more like Oswald’s own work.

I have played this tune for a while – I included a complete version with Oswald’s variations on Clàrsach na Bànrighe, and I have played it to accompany Sheena Wellington singing “Ae Fond Kiss”, but have always thought it was not particularly convincing as a piece of ancient harp idiom. My suspicion was strengthened when I read recently about Oswald’s common use of pseudonyms when publishing tunes (a common enough thing in mid 18th century Scottish literary circles I understand). Perhaps we should simply add “Rory Dall” to the list of Oswald’s pseudonyms alongside “Rizzio” and “Dottel Figlio”.

At the Edinburgh Harp Festival on Tuesday April 9th, 11:00 am, at Merchiston Castle School, Edinburgh, John Purser is giving this interesting presentation:
Pìobaireachd – what it might mean for the clarsach

I have already booked a ticket – it will be fascinating to hear what he has to say. John has been working with Bonnie Rideout for some time now on the fiddle pibroch repertoire (see Bonnie’s CDs in my Emporium) and so I hope he will have some useful insights about harp ceòl mór.

I was thinking about who has already been working on this and there are quite a few people who have recorded piobaireachd on the clarsach – Alan Stivell, Alison Kinnaird, Ann Heymann, Violaine Mayor, and more recently a number of youtube experimenters including Brendan Ring, Dominic Haerinck, Chris Caswell (who passed away very recently), and Sue Phillips. Quite apart from Grainne Yeats and Charles Guard who have recorded Burns March – in my opinion the archetypal Gaelic harp ceol mor.

Both of my previous CDs included ceol mor or pibroch – but the next one will be “wall to wall”. I have also put some experiments on youtube – here’s a very early and rough version of a classic piobaireachd that I adapted for harp:

I’ll be on site during the harp festival week with my Emporium bookstall – if you are there do come along and say hello.

“…I had the good fortune to meet a direct descendent of the Borreraig MacCrimmons,
… he told me that the clarsach influenced the pipe pointing out how the [pipe] music of the late 16th or 17th century stood above all others [later] in merit.
He went so far as to say that piobaireachd renderings on the clarsach were common at one time…”

Grab your red and green glasses… 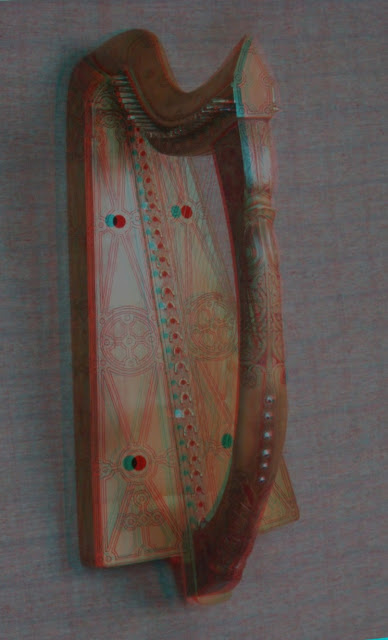 Thanks to Karen Loomis for the instructions and idea! 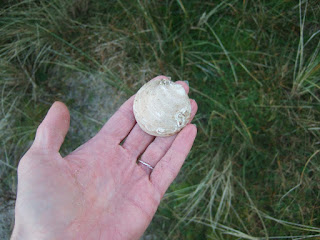 At the moment I am working on Maol Donn. This lovely pibroch is often given the romantic English title “MacCrimmon’s Sweetheart”. Its original title means brown or tawny hummock, or rounded thing, perhaps referring to the bald hornless forehead of the cow that was lost in the bog, which some stories say is the origin of the tune. I like the story of Ranald MacDonald of Morar composing this tune to a smooth brown seashell he found on the beach.

There are a number of recordings available of this tune played on the pipes. The oldest is played by John MacDonald of Inverness in 1926:
http://www.cl.cam.ac.uk/~rja14/musicfiles/mp3s/jmcd-mcswthrt.mp3
from Ross’s Music Page

My favourite is played by Calum Johnston in 1955:
http://www.tobarandualchais.co.uk/fullrecord/53368/1

Here’s the traditional song that goes with it, sung by Kate MacDonald in 1970:
http://www.tobarandualchais.co.uk/fullrecord/92097/1