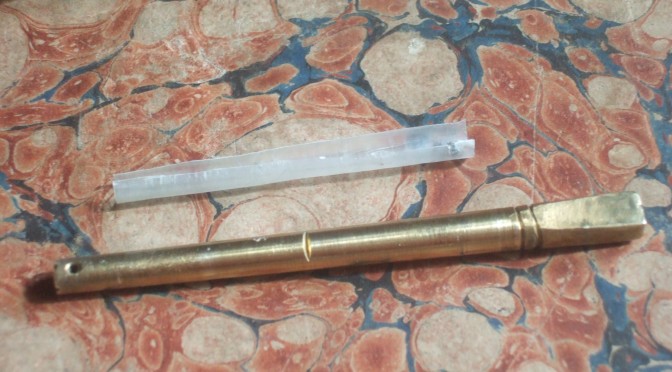 In Karen Loomis’s PhD thesis (volume 3, p.379-380) she prints two photographs of a shim from tuning pin hole no.23 on the Queen Mary harp. One shows the shim extracted; it is made from a split section of a feather quill.

On my replica, pins 29 and 30 have needed shimming for some years now. I had originally tried paper, and subsequently sheet brass, but I was inspired by this discovery, to pull the pins and try quill shims.

My mother, who has geese in her field, sent me a couple of goose quills, since Karen had suggested that the quill in the harp was from a  pretty large bird. I cut a length that matched the width of the neck of the harp, but even using the widest part of the quill, it was too slender to fit over the tuning pin. I thought this didn’t matter though, since the quill in the Queen Mary harp is split along its length. After slitting, I found a bigger problem – the walls of the quill were far too thick.

I measured an offcut of the quill with my micrometer – it is about 0.3mm thick. By contrast, the brass sheets I had been using previously must have totalled more like 0.1mm.

On reflection, I thought this made sense – the Queen Mary harp has its quill shim in position 23, and the cheekband is broken at position 24 due to a break in the neck. It made sense to think that the thick quill shim would be needed at the point where the wood of the neck was splintered and damaged. Presumably the shim from position 24 and other nearby pins has been lost.

However, I wasn’t going to be put off so easily, since my harp still needed a shim, and I had unwound a gold bass string to pull pin 29 out. So I took a local seagull wing feather, and cut a length of quill from this. It mic’d up at about 0.1mm, which I thought seemed more reasonable. It still was too thick, but careful scraping to thin it made it eventually fit perfectly.

Now all I need to do is repeat the process for the 30th pin! And to watch how it behaves as I tune the harp. String 29 goes up and down a whole tone most weeks, as I switch the pitch of the harp from A440 to A495/370. My initial impression is that the friction between brass pin and quill is just about right, but this may change as the quill compresses and polishes.

One thought on “Quill shim”