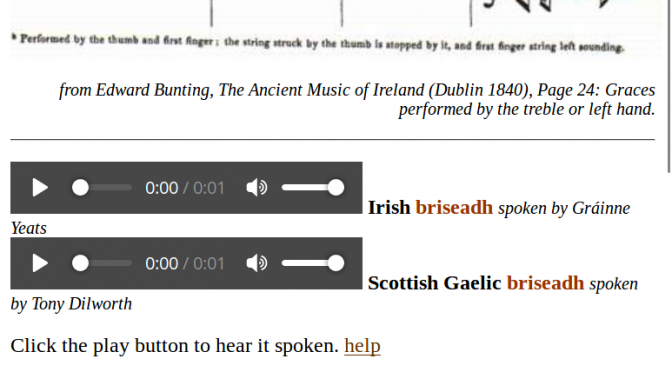 I transcoded the audio and video on the Irish Terms page. Hopefully they will now work no problem on modern computers and browsers. Next, the videos need updated and the whole look of these pages. Later…

Check it out at http://earlygaelicharp.info/Irish_Terms/

I made these pages back in 2002 for the now-defunct website at clarsach.net, which was started and run by Barnaby Brown and Bill Taylor. When clarsach.net closed in 2006, I was asked to host these pages here, because of their audio and video content. (other material from clarsach.net was migrated over to a new site for the Wire Branch of the Clarsach Society, also now defunct).

Back in 2002, Quicktime audio and video was pretty cutting edge on the internet. Bill had made a series of tiny video demonstrations, like the one on the page for an fhorshnaidhm. His series was incomplete, as it was designed for tutor pages not for this project, and so in 2008 after I got a new camera, I made new, bigger (but still tiny) videos to demonstrate all of the musical terms.

I don’t stand by everything here; the videos especially show my 10-year-old practice, which has evolved a lot. I am currently working on a new book, to replace my Gestures book. The new book, provisionally titled The method of playing, focusses on the soirces for late 18th and early 19th century Irish harp technique, with Bunting’s 1840 tables as the core. As I work on this new book, I will make new videos and demonstrations and I may well revamp these pages at that time, to add in new ideas and material and to keep them up to date.

I love having Colm O Baoill’s commentary, and especially the audio from Grainne Yeats and Tony Dilworth. Its such a lovely thing to hear Grainne speaking these words!