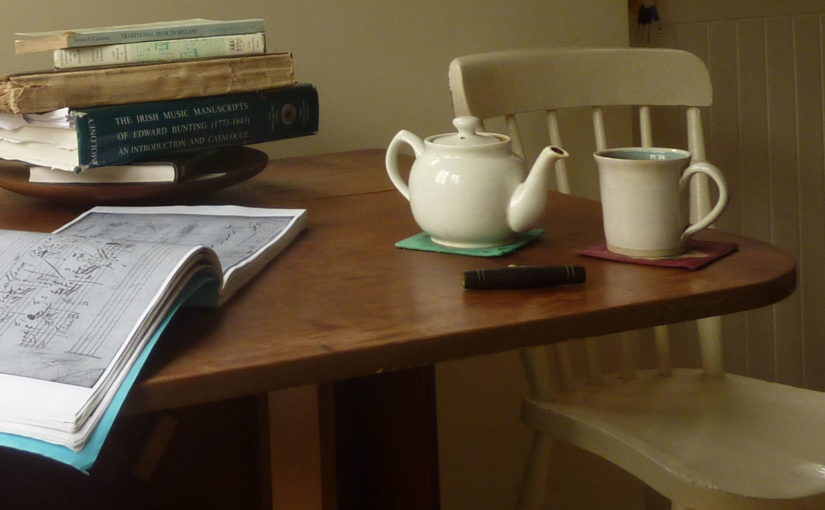 If we check my Old Irish Harp Transcription Project tune list spreadsheet then we can see that the section of Queen’s University Belfast, Special Collections, MS4.29 from p. 44 to p.61 seems to be mostly transcriptions notated from Denis O’Hampsey in Magilligan.

However there are two transcriptions in this section which seem to me to be written in a different style, and which I think might be noted from Hugh Higgins in 1792.

The first of these is Kitty Tyrrell. Bunting wrote a live transcription on Queen’s University Belfast, Special Collections, MS4.29 p.47/43/52/f21r. Bunting has titled his transcription “Cathleen Treeall”. It is a lovely traditional air with many variants, still well-known today in the living tradition. Here is my tentative demonstration:

Caitlín Triall is one of the tunes tagged “Higgins” in the annotated copy of Bunting’s published piano arrangement (1797 no.8). I’m not convinced that his arrangement is really based on the transcription; it might derive from an earlier printed edition.

At first sight , the p.47 notation looks very clear and simple. But, because Bunting does not indicate bar-lines, this transcription does not show what the stressed or strong notes are, which is vital for reconstructing the flow and structure of the tune. Some parts are clear enough, and to help me make sense of it, I have listened to other traditional versions, including Teresa McCormack’s 1930 harp recording, where the tune is titled “Eamonn na Cnuic”, and Máire Ní Arbhasaigh’s sung fragment from 1931.

Bunting has noted “B” at certain points in the tune, which is usually interpreted as an indication of a note played an octave lower, in the bass. I have also chosen to play the low D-E passages in the bass, though that is not indicated in the transcription. This video is perhaps less a “demonstration” of the transcription, more an “interpretation” of it.

The Friar and Nun

Turning over to the next page, QUB SC MS4.29 p.48 shows another tune in the same transcription style, without bar-lines. Here is my demonstration of it:

As well as this transcription, Bunting gives us a fair amount of commentary on this tune. I don’t have copies of the manuscript pages, but they are cited by Donal O’Sullivan in his Bunting (1983, p.199), and Colette Moloney in her Introduction and Catalogue (2000, p.229). There is a little English song text:

A Lovely Nun to a Friar Came
to Confess on a morning early
In what, my dear, are you to blame
come tell me most sincerely
Alas, my guilt I dare not name
but my lad he loved me dearly

There are also three different descriptions by Bunting, all within a few pages in QUB SC MS4.12 which kind of repeat the same information but with different emphasis or detail. Two of the descriptions say

This air is given on Hempson’s authority as being an Irish tune; he had learned it from his first master…

but the third does not mention O’Hampsey. We are told that

In the video, I am playing the sections marked “B 8ths” in the transcriptions using bass octaves. These sections in the harp transcription don’t match the male and female voices in Bunting’s song text. There is no mention of the harpers singing any words to it.

Bunting also tells us that

This was a favourite tune with the old harpers, and listened to by every auditor with great delight

This is the only air admitted into the collection which is not of unquestionable Irish origin; but the Editor has adopted it as Irish, on the authority of all the old Irish harpers with whom he has conversed; it was at all times a favourite tune of theirs… the higher and lower octaves aptly coincide with the alternations of the male and female voices in the song

Bunting’s piano arrangement is very enthusiastically classical piano style; it doesn’t follow the transcription very closely. He includes a division-type variation, and at the top of the page he says “The var[itation] by Lyons in 1698”, but I have no idea where this information comes from and I don’t see it in the transcription manuscripts.

There is some interesting sociological stuff going on here; compared to the beautiful and sophisticated Irish song airs played by many of the harpers, this is a sniggering schoolboy ditty of a song. How are we to understand the harpers and their listeners taking “great delight” in this “favourite”?

All but two of the tunes in QUB SC MS4.29 p.44 to p.61 are tagged Denis O’Hampsey in later piano arrangements. The two exceptions are Kitty Tyrrell on p.47, and A ghadaidhe ghoid mo shláinte Uaim (The Jointure or the Golden Star) on p.53, which are both tagged “Higgins” in the annotated 1797 print. The Jointure is not a transcription, it is a neat edited copy, but we could be missing the facing page (indicated in my ms29 text pdf) which may have contained the transcription which this neat edited copy is based on.

I suspect that the Friar and Nun was also transcribed from Higgins in 1792; the notation style of both it and Caitlín Triall on p.47 of the manuscript looks different from the O’Hampsey transcriptions, but reminds me of Tá mé mo chodhladh on p.28.

Did Bunting carry these Higgins ’92 transcription sheets with him when he visited O’Hampsey in Magilligan in ’96? Did he scribble O’Hampsey’s tunes into spare spaces in the ’92 collecting booklets? Did he ask O’Hampsey’s opinion of the tunes he had collected from Higgins?

It struck me that these two raise questions about what my current work is; the manuscript transcriptions can offer different and interesting sets of tunes from what we get from classical arrangements, or from present day living tradition. It depends really what you want to do. I understand more and more that for me, my motivation is to understand how to play the old Irish harp, what is its natural style and idiom, how does a tune become adapted by the harper to sit easily and freely on the instrument.

This Old Irish Harp Transcriptions Project developed out of the realisation that the transcriptions “froze” the performing style of the last of the old harpers, and so a detailed study of those transcriptions could reveal subtle aspects of old Irish harp style and idiom that would not be available from any other source.

However, it quickly became clear that the study needed to firstly discriminate, so as to filter out all of the manuscript notations that are not transcriptions at all, but were copied from printed books and other written sources, or are new piano arrangements; then to filter out all the transcriptions that are not from harpers, but are from singers or other instrumentalists; and now the third level of filtering, to recognise transcriptions that are genuinely notated live from the playing of an old Irish harp tradition-bearer, but which are deficient in some way so as to not give us what we need to know, about how the tune was actually played.

5 thoughts on “Caitlín Triall, and the Friar and Nun”