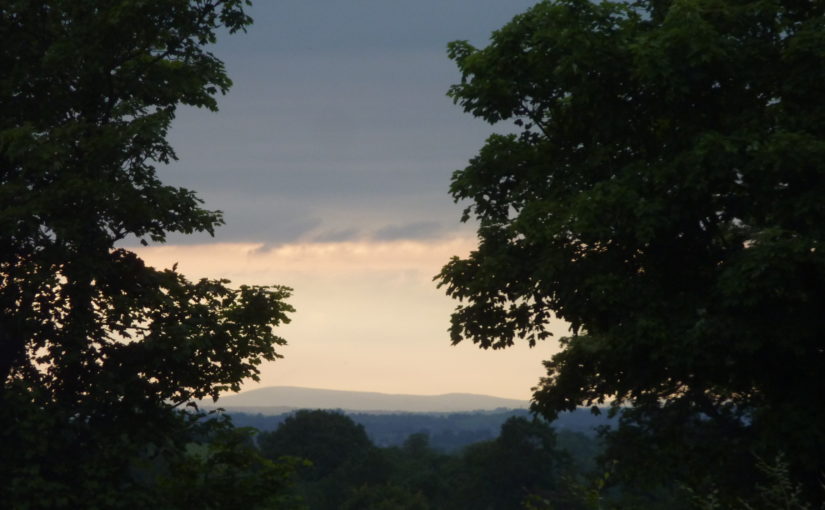 I made a video demonstration of the old Irish harp tune Sliabh gCallann (Slieve Gallen), as transcribed live from the playing of the harper Hugh Higgins in the summer of 1792.

Slieve Gallen, or Slieve Gallion, is a mountain in the north of Ireland. The original Irish form of the name is Sliabh gCallann. The mountain is the easternmost of the Sperrins, and is just to the south east of Ballynascreen (Baile na Scríne).

Slieve Gallan (rectires as Colgan has it, slieve Callann) has derived its name from Callann mor a giant, who lies interred on <in> Carnanbane, in the townland of Ballybriest, where mossy rocks yet mark his grave. The following quatra<i>ne is yet repeated which preserves all that is known of Callann mor.

Callann, the son of the king of <Tir Suthain> Tuan
Is interred at the north side of the mountain
His head (pointing) down to Lough-na-gun
And his feet up towards the mountain

Loch-na-gun i.e. the lake of the grey hounds <so called from Finn Mc. Cool’s dogs> is now called Lough Fea. This is the situation of the giants grave on Carnanbane, which is said to be where Callann Mor is interred. One end of it points to the Lough and the other to the mountain.

In the summer of 1792, Edward Bunting spent “a good part of the summer about Ballinascreen and other mountainous districts” of this area, collecting “airs from the country people” (1840 introduction, p.4, cited on my Collecting Trips blog post). I assume that it was on this tour in the summer of ’92 that he met the harper Hugh Higgins, who played him the tune of Sliabh gCallann. Bunting made a live transcription of the tune into one of his collecting pamphlets, and the two pages are now part of Queen’s University Belfast, Special Collections MS4.29 page 80/76/085/f37v and 81/77/086/f38r.

We can look at my Old Irish Harp Transcription Project tune list spreadsheet to see that the tune is tagged in five different places as being played by Higgins, four of them specifying 1792. No-one else is credited with playing the tune.

For more info on Higgins see my post on Tá Mé Mo Chodladh.

As far as I can see, every other version of the tune of Sliabh gCallann derives from this live transcription of Hugh Higgins’s harp playing. Bunting made a number of manuscript piano arrangements, and he eventually published a piano arrangement of the tune in his 1840 collection (no.24, p.21). Other later published versions of the tune derive from Bunting’s 1840 print. More recently, in 1983 Donal O’Sullivan printed an edited score of the first half of the MS4.33.3 version (MOSB 24), and in 1992 Ann Heymann printed an edition of the MS4.33.3 version (Legacy p.22-3)

Structure of the tune

The notation in the live transcription gives us a 4 line tune on p.80, and a two line “variation” on p.81. I did wonder for a second if the pages are out of order so the p.81 notation could relate to an entirely different tune, but it seems clear that the “variation” is based on the middle section of the p.80 tune. The variation does not come to a neat end but finishes with a pickup and then a long curving dash which seems to imply the tune continues somehow. We can look at Bunting’s piano arrangements to see how he organises the sections of the tune.

In my demonstration I have chosen to play 1, 2, 3, 4, 1, 5, 6, 4 on the understanding that lines 5 and 6 are variations based on lines 2 and 3, and thinking that in the 1798 piano manuscript Bunting often seems to be trying to articulate certain elements of harp style through his piano arrangements. But this may be misguided.

We can see that the transcription on MS4.29 p. 80 – 81 is a composite notation, with some dots visible beneath overwritten heavy notes. In fact we could possibly describe three kinds of marks on this page: dots which have been abandoned or crossed out; dots with stems and beams; and heavily written notes with stems and beams.

At this stage it seems hard to say which of these layers is closest to what Higgins played. Ann Heymann writes (Legacy, 1992, p.24):

This MS29 version was obviously written “on sight”, for a series of measureless dots on the staff have had stems, beams and barlines added afterwards. Bunting also added sporadic “B”s, indicating bass hand notes.

Do the initial dots represent Higgins, with every added change being Bunting’s piano composition? Or did Bunting mis-notate the initial dots, and use the re-writing to bring the finished notation closer to Higgins’s performance? The lack of relevant meta-data about the tune and arrangement does not help to answer these questions; the piano arrangements are just presented “as is” and it is up to us to make that judgement. In the end, to play the tune, decisions have to be made, and for the purposes of this demonstration I have tried to follow the dots rather than the heavy notes. Other approaches are possible, and may or may not better represent Higgins’s original performance practice. That is, after all the point of my Old Irish Harp Transcriptions Project, to try and come up with working methods to answer this kind of question!

QUB SC MS4.29 p.81 is headed “Variation to Ditto” and contains two lines, which seem to correspond to the middle two lines of the tune (as described above). They are notable for having sequences written low on the staff, with simultaneous pairs of high and low notes at the start of the first and second bar. Siobhán Armstrong suggested these could be understood as a “bass division”, a melody played with the right (bass) hand in the bass, while the left (treble) hand plays the little trills above.

As with the tune on p.80, I have tried to ignore the subsequent layers of heavier notes and look for the dots. I also tried to imagine Higgins’s playing in the mainstream of the old Irish harp tradition, and so I have edited some of the bass passages to bring them up into the treble. It is still not clear whether Bunting invented the idea of the bass melody in the variation, or if it was Higgins’s playing; either way can potentially have validity in trying to re-construct the original performance practice.

Below the variation, at the bottom of p.81, Bunting has written a scale showing the notes of a harp, marked “Right hand” in the bass and “Left hand” in the treble. The very lowest note G, is marked an octave higher than we expect, and is labelled “organ”. There is no note for bass C or F. The two na comhluighe strings are labelled “Sisters” and are marked at g below middle c. They are divided by a bar-line to separate the right hand bass from the left hand treble. Below the chart is written “harp always tuned by the sisters”.

Is this the scale of Higgins’s harp? Did it arise from a discussion between Higgins and Bunting about the disposition of notes between treble hand and bass hand in the variation?

The transcription is written at pitch, so that the tune is in A minor. The notes of an A minor pentatonic mode are A C D E G and so it is related to C major. This tune seems to move between A sonorities and C sonorities. The passing Fs are f natural.

It strikes me that different parts of the tune have a somewhat different sound. Lines 1 and 4 have a more pentatonic feel; the B sounds very “out of mode” and gives the tune its mournful, otherworldly feel. But in lines 2 and 3, and in the variation, the B becomes much less otherworldly and takes its classical harmonic role. I think this gives the tune a very different feel overall from many of the other traditional old Irish harp tunes I have been working on.

Minor mode tunes seem quite rare in the old Irish harp tradition; major is perhaps the most common but there are a lot more neutral mode tunes than minor mode ones. I have been marking the pentatonic mode for each tune in my Old Irish Harp Transcription Project tune list spreadsheet so you can count each type.

On p.80 at the top of the transcription page is the text “Lions Imp:d” (i.e. “improved by Lyons”). However this is written in pencil, in a different hand from the live transcription from Higgins. I don’t know who might have written this text, or when, or where this information came from.

In the 1840 book, the piano arrangement (no.24, p.21) is headed “Very Ancient, Author and date unknown”. In the introduction, Bunting has written describing the tunes played at Belfast in 1792,

a district long famous for… the preservation of ancient Irish melodies in their original purity [footnote:] The beautiful tunes “Sliebh Gallen” and “The Little Swallow” are two of them; they are now given to the world for the first time.

Sliabh gCallan is not in the list of Lyons tunes given by Arthur O’Neill (Memoirs, QUB SC MS4.46 p.20/042 & QUB SC MS4.14 p. 25), and it is not in the repertory noted by Anna-Jane Maclean-Clephane in 1816 apparently deriving from the testimony of Lyons’s student, Echlin Ó Catháin. I am starting to doubt this Lyons attribution. The only places the attribution appears are 1840 p.96, and the pencil note in MS4.29 p.80.

The Friar and the Nun is another tune that has an isolated and uncorroborated Lyons tag in the 1840 print. It also has unusual bass markings in the transcription and description, possibly reminiscent of the Sliabh gCallann variation. Is Bunting making up Lyons attributions here? If we could identify the handwriting of the pencil “Lions Imp:d” tag in MS4.29 p.80 that could help us make a better assessment of this question.

I have come across a few different English-language songs about Sliabh gCallann. I don’t think any of these songs is relevant or related to the harp tune.

The best-known one is an English-language ballad, usually called “The Braes of Slieve Galleon”. I first heard this song from the singing of my friend Denise who lives in the area south-east of the mountain, close to Lough Neagh, in the opposite direction from Ballinascreen.

Here is a lovely video of a local Lough Neagh fisherman, Nailly Coney, singing the song:

There is a more modern one, titled “Slieve Gallen Brae” and composed by James O’Kane, apparently in the later 19th century (Sam Henry’s Songs of the People, ed. Huntington & Herrmann, University of Georgia Press 1990, p.172-3). Sam Henry also has a song “Farewell to Slieve Gallen” (p.198) composed by John Canavan and dating from 1898.

I wonder if Nailly Coney’s performance with the mandolin and voice, could be one possible model for singing with the harp?