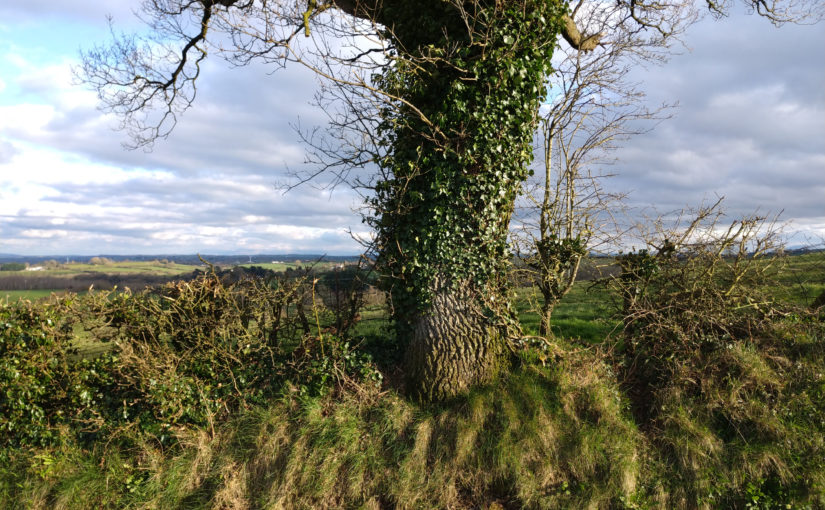 On Queen’s University Belfast, Special Collections, MS4.29 page 224, Edward Bunting has made what looks like a transcription of a tune, titled “Nancy na Gráve”.

Pages 224 and 225 make a double page opening with three tunes on. I am going to do a blog post about each tune in turn. We will start with Nancy na gCraobh which is the first two staves of page 224, on the left of the double page opening.

Nancy na gCraobh is notated in dots, which have been partially deleted and overwritten with note stems, beams and bars. The barring switches from 4 time in the first half to 2 time in the second, but it is pretty unproblematic. I am following the over-writing here, because I think the deleted dots look more like corrected transcription errors, rather than accurate but abandoned transcription notation.

There is no hint on this transcription notation as to where it may have been taken from. It is in C major, with no Fs, which means it would fit well on the harp; but it could equally have been transcribed from a singer or other traditional musician. We see from my tune list spreadsheet that adjacent pages contain transcriptions that could have been done from a harper, either Hugh Higgins or Arthur O’Neill. It is possible that one of them is also the source for these transcriptions on p.244-5. If I had to put money on it I would choose Higgins, but I don’t think there is a way to prove it either way. The adjacent pages all seem to be Summer 1792 transcriptions and so that is also a possible date for these pages. And the melody seems kind of harp-style to me.

In 1802, Edward Bunting went out to Westport to meet up with the song collector Patrick Lynch. Bunting transcribed song tunes from traditional singers and pipers, and his notebook from that trip is now QUB SC MS4.33.1. There is a version of our tune in that notebook, with a slightly different title “Nancy jesh na gcuach” (Nancy dheas na gCuach):

This tune is numbered 12; the initials “D.M.” stand for the key of D major, 2 sharps. Bunting has written a time signature of 2/4 but has barred the tune in 4/4. This seems a very clear transcription, I assume from a vocal performance by a singer. It is not clear to me why this one has a different title from the other, with “cuach” instead of “craobh”. Bunting also writes “set in red book”. He writes the same “red book” tag against another tune in this notebook (Ciste no stór) and I don’t know which piano manuscript he might have been referring to. He did publish a very classical piano arrangement in his 1809 book, p.45, titled “Anna na Geraoib / Anna na Geraoibh – Nancy of the branching tresses”. There is no attribution given in the annotated copy.

Lynch also made an English translation for Edward Bunting, which you can see in QUB SC MS4.32.110:

Lynch’s version of this song is very interesting. His translation is a bit quirky, but I think there is a lot of value in having the same person transcribing an oral performance of the song-poem, and also making a translation of it – it gives us an insight into his understanding of the lyrics.

I have not collated Lynch’s song collecting dates and items, but I note the overlap between the items in the index of MS4.7 and in the index in his Journal (ms4.24), where he indicates that Nancy na gCraob was collected from Mary Carney. The index implies that this could have been at Killarga, county Leitrim, maybe in May 1802. I don’t really understand this index yet. If it were done that early in the trip, then it is unlikely that Lynch’s text and Bunting’s MS4.33.1 tune transcription were taken from the same singer. Also, the titles being slightly different might point to them not deriving from the same source.

The piper James Cody wrote a more florid version of this tune into a tune book that he had compiled for Edward Bunting between 1805 and 1810. Cody’s title is “Nancy na ccraoibh”:

Cody also wrote a set of the words into his rough notebook which is now QUB SC MS4.6 page 95-6. I have only seen the p.96 and I will not transcribe it here for you – that will do for another day. Cody’s words are a variant of Lynch’s. Sometimes in MS4.6 Cody writes tune and words together, and sometimes he then copies the tune across into the neat tune book, like we see for Eleanor Plunkett. More research is needed on Cody’s working method as well. This could be a vocal set.

There is a third independent version of our song words, titled “Nancy Fitzgarreld” in RIA 23E21, “a paper manuscript, contains a considerable number of Carolan’s poems”, signed at the end by the scribe, “Michl. Killeen, Keadue”. Tomás Ó Máille includes an edited version of the text in his Amhráin Chearbhalláin, 1916, page 269–270. Ó Máille includes this poem though he does not indicate that it is attributed to Carolan except from by inclusion in Killeen’s manuscript. There is no tune associated with this version.

We also have a printed version of the tune in Holden, A collection of favourite Irish airs arranged for the harp or piano forte, page 19. The date of this book is often given as 1810. Holden’s title is “Nancy of the pleasing Tresses”

Donal O’Sullivan prints the three different tunes that Bunting and Cody give us, and references Holden, and prints a kind of combined edited text with selections from Lynch and Cody, in his Bunting part V, 1936, p.82-6. I have relied on his work for a lot of this post.

I don’t really have any conclusion. I suppose this song and tune are not really connected to Carolan. It’s also worth pointing out that there is no direct connection between any of the variants of the words, and any of the variants of the tune – we are just assuming that there is some match between them because of the similar or identical title, and the metrical fit.

Is the “Nancy FitzGerald” title genuine, or could it be a scribal corruption of “na gCraobh”? Could we try to work out who the “son of Lord Howth” was who might have had a dalliance with Anna FitzGerald? Probably not.