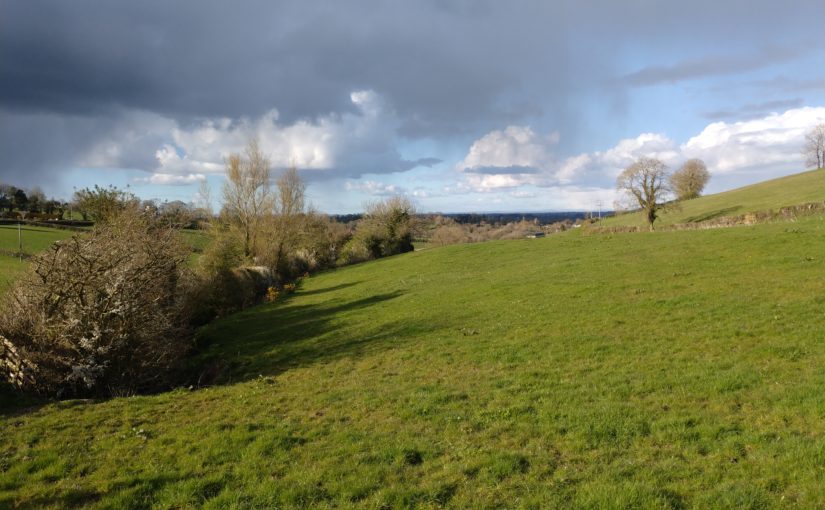 Back in the Autumn, I posted a summary of part 1 of my Old Irish Harp Transcriptions project. By then, I had worked through the first section of Edward Bunting’s main transcription manuscript from the 1790s (now Queen’s University Belfast, Special Collections, MS4.29).

Now I have finished working through the third section of the manuscript, I think we can have a retrospective of the project so far.

The individual pamphlets of MS4.29 were bound up into a book in or after 1802. They seem to have been bound up all out of order, but we can group the manuscript into four main sections. Parts 2 and 4 form a coherent single grouping which seems to be song airs collected by Bunting on his tour through Mayo in 1792 with Kirwan (more info on my Collecting trips post). Parts 1 and 3 are formed from a disparate mix of pamphlets which contain mixed material, including tunes copied from printed books, live transcriptions from harpers, live transcriptions from other traditional musicians, tune lists, and other miscellaneous stuff. These apparently mostly relate to two main collecting periods, the summer of 1792 and the summer of 1796. You can see the structure of the manuscript on my MS29 PDF index and text transcript.

I have not done a post on every single harp transcription from sections 1 and 3; I have skipped some which are problematical or which other researchers are dealing with. We can check my Old Irish Harp Transcriptions Project Tune List Spreadsheet to see that I have identified 105 items in part 3 of MS4.29 (from pages 144 through to 236). Of these, I have marked 33 (31%) as being likely harp transcriptions; I have done posts on 25 tunes from this section of the manuscript.

The tunes that I have marked as not likely harp transcriptions, are a mixture of things. Some are copied from printed books or other manuscripts. Some seem to be clearly vocal transcriptions. Others are pretty ambiguous, and seem to be perhaps transcriptions of harpers singing rather than playing the harp. Charles Byrne especially seems to have been a source for vocal versions of song airs.

The first clear harp tune which I looked at but deliberately did not do a demonstration of, was Eleanor Plunkett. I chose not to try and make a realisation on the harp, because it is an O’Hampsey tune, and I have been avoiding them. But I really wanted to write that tune up because I had found so much fascinating information about it. Instead, I made typeset versions of the manuscripts, and then generated machine audio so you can listen to what is written on the manuscript page without a human “interpreting” it. I had good feedback about the usefulness of the machine audio, and so I have done a PDF typeset version of every transcription notation since then, and a machine audio presented underneath the manuscript facsimile.

I did keep on making a few video demonstrations, but when I got to Grádh gan fhios I stopped. I was working on playing this tune on the harp, but I have also been working with Sylvia Crawford on her forthcoming book of playing techniques and I felt that the work to come up with a viable realisation was seperating itself off from the process of providing a commentary on the transcriptions. And since the machine audio acted as a “literal” realisation of the tune, I decided to stop doing the demonstration videos for now. I am still working on Grádh gan fhios, and eventually I will do a video of it, but that will be as the first in a new series of realisations that is not so intimately connected to this series of blog posts.

Since I stopped doing video demonstrations, I have started to use my photographs as my header images for each post. A few of the older posts have local images as their headers, and I quite like the atmospheres each of these scenes give. Most of the pictures were taken by me when walking the country roads in the hills close to Armagh city (an exception is the ice disk in my parents’ orchard in England which I made years ago). I hope you like them – my aim is to give some of the atmosphere of the landscapes where the old harpers were working, and where Bunting met them and collected the tunes from them.

I think there are two things I still need to do for my Transcriptions project. One is to go back over MS4.29 and write up the transcription pages I have not yet done. There are the Denis O’Hampsey ones, there are others I skipped, and there are the ones at the beginning of the manuscript which I only made videos of but never wrote up. I also should make typeset PDFs and machine audio for all the ones before Eleanor Plunkett.

The other thing I should do is move forward, and look at the transcription notations in other manuscripts. Some of these I have not yet seen, and I really need to go to Queen’s to consult the manuscripts in person to see which pages might be promising.

I also have been asked to do two online live presentations which will build on the work I have been doing here on the Old Irish Harp Transcriptions Project.

The first is for Cruit Éireann, on Sunday 23rd May 2021 at 5pm. I will be doing their Annual Lecture, with the title “Edward Bunting as Collector”. This talk will be more general and will focus on the nature of Bunting’s collecting work from the start in 1792 right through to the writing of the annotations probably in the early 1840s just before he died. I think this talk will not have much gory detail about the transcription notations but will give the wider context and background.

The second is for the Historical Harp Society of Ireland, where I will be doing a workshop at Scoil na gCláirseach on Wednesday 28th July 2021 at 5.15pm. The title is “An introduction to Edward Bunting’s manuscripts” and this talk will concentrate on the harp transcriptions, discussing how to recognise harp transcriptions in the manuscripts, and how to read and interpret and understand them.