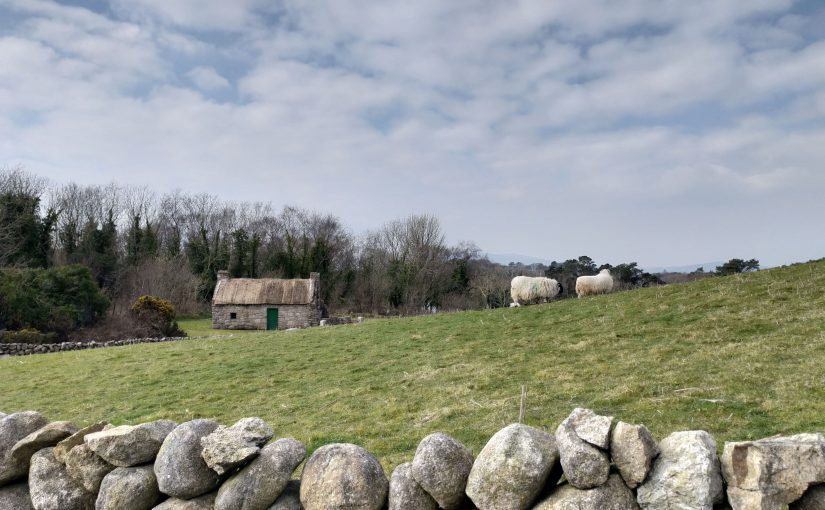 The past 25 or so tunes I have written up here have mostly had some kind of attribution to the harper and singer, Charles Byrne. Checking my Tune List Spreadsheet, I think Rambling Boy is the last Byrne-attributed tune that I have not yet written up, and so this post marks the end of this Byrne series. I think Byrne is very interesting, but I don’t know how useful he is for my Harp Transcriptions project, since I think he may have been mainly singing for Bunting, not playing the harp so much.

There are two transcription notations of Rambling Boy in QUB SC MS4.29, on page 12/12/021/f5v and on page 21/21/030/f10r. I think they are two independent notations from two different informants. Lets look at each in turn.

Bunting has written above the first half of the dots “Mr Stewart” and above the second half “Secd part Repd” and two S signs to show the repeat.

My machine audio and typeset version have bumped this down one whole note. As written it would be in F♯ minor, with three sharps – this is not possible on a traditionally tuned old Irish harp. But shifting it down one puts it into E minor with one sharp tuned on the harp, which is a common enough key for the old harp tunes. If we check my Old Irish Harp Transcriptions Project Tune List Spreadsheet we see that most of the transcription notations in this section of MS4.29 are notated one note higher than a sensible harp pitch.

The p.21 “not [r]ight (Saturday)” transcription

Edward Bunting wrote a version of the Rambling Boy onto one of his collecting pamphlets, now QUB SC MS4.29 page 21. I am not entirely sure if this is a live transcription from a tradition-bearer, or copied from elsewhere. I am thinking it may well be a live transcription because of the way he is developing his rhythmic ideas between the first line rough notation and the third line neat copy.

Bunting has written the possible live transcription at the top of the page, and then underneath he has made a heavier neat copy, presumably trying to understand it in his mind. In between on line two is a little phrase which I am not sure about, it could be to clarify that section of the initial live transcription or it could be to clarify the neat copy.

Bunting’s title here is “The Rambling boy”. I don’t know what the heading “not [r]ight (Saturday)” refers to. Underneath the first line of notation he writes “not repeated”. Along the bottom is a deleted title that I can’t read, perhaps beginning “Mr…” and then a line of (unusually spaced out) deleted dots of our tune.

I looked at my MS4.29 index PDF, and I did wonder for a while if this may have once been a facing page and continuation of the notation on page 12. but actually I think it seems to be an independent witness to the tune. The initial two notes running up instead of down, and the way the tune turns, show it to be a subtly different version.

I have again made my machine audio and pdf versions one note down, so the tune is in E minor.

There is what looks to me like a third independent notation of the Rambling Boy. It is on a loose slip of paper. Colette Moloney, in her Introduction and Catalogue (ITMA 2000) p. 225 and 246 says it is in Edward Bunting’s handwriting but I am not sure about this, I am not sure the treble clefs especially are his. Perhaps someone else wrote this and sent or gave it to Bunting?

I actually think it is the same handwriting as on the loose sheet QUB SC MS4.12.2.28 which contains what I think are live transcriptions from the harper Dominick O’Donnell in 1811. I discuss one of those transcriptions on my post on Bradog. You can especially compare the shapes of the treble clefs, and the way “Dominick O Donnell” and “Mayo” are written.

The title is “Rambling Boy / Mr Sloan”. The other tune above is “Mr Sloan’s Tune”. Underneath is written some interesting information “A Harper / Dominick O Donnell / near / Bellaghy County Mayo / a good Player by O Neil’s account”.

This version of the tune is in A minor with all naturals. It has similar descending introductory notes and curl of the tune as we see in MS4.29 p.12, but that introductory phrase is more compressed. It is clear that this is a third independent witness to our tune.

So did this anonymous correspondent first give Bunting this sheet perhaps in 1799 (see below), with two tunes from Mr Sloane, and information about Dominick O’Donnell? And then in 1811 did this mystery person finally get to meet O’Donnell, and transcribe three tunes from him, and fold up that other transcription sheet and post it to Bunting in a letter? We need to dig more. Perhaps there is other material in QUB MS4 with the same handwriting on.

Bunting copied the tunes and text of this sheet into the back of the music notebook that James Cody had compiled for him between 1805 and 1810.

I think you can see this is almost a straight copy of the two tunes from the scrap of paper into the notebook. However Bunting has expanded out the first section by repeating it. He has also added the time signature and adjusted the rhythm a little.

The titles are “Mr Sloan’s tune” and “Rambling Boy from ditto” Bunting has crossed out the titles and also the entire page, and he says “set two pages back”, and both tunes do appear in the same form a few pages earlier in the book. I’m especially interested to see the cartouche on page 82 which copies the information about Dominic O’Donnell. You can compare Bunting’s handwriting on these pages, with the writing on the loose sheet. There is the handwriting, the notes, and the treble clefs. I think they are all different from the loose sheet, but decide for yourself.

Bunting made a piano arrangement of the Rambling Boy in his unpublished 1798 Ancient and Modern piano collection (QUB SC MS4.33.3&2).

Bunting’s title is “Rambling boy” and his note at the bottom says “From Charles Byrne / this tune affords no proof of great Antiquity”.

Bunting has made a small scribal error in this otherwise nice piano arrangement – there should be three sharps in the key signature instead of just two. My machine audio and PDF version restore the three sharps key signature, for a key of F♯ minor, the same as how the two transcriptions in MS4.29 are originally notated.

I would say this 1798 piano arrangement combines readings from both of the MS4.29 notations; the ascending introductory notes match the notation on page 21 but the turns in the middle match the version on page 12.

In the late 1830s, there is a pair of piano arrangements made by Bunting (or perhaps also by his editors) which are similar to the 1840 published arrangement; the piano bass has been edited in pencil. One is in QUB SC MS4.27 p.73. The attribution given there, according to Moloney, is “from W. Sloan esqr. in 1799 at Armagh”. The other is in QUB SC MS4.13 p.98. It seems to be titled “Rambling Boy or Sailor Boy” and also “I am a Poor, and a Rambling Boy”.

Bunting finally published a piano arrangement as no. 96 on p.71 of his 1840 Ancient Music of Ireland:

This version reverts to the descending introductory notes as seen in the Mr Sloane sheet as well as in MS4.29 p.12.

I think both these piano arrangements are pretty good if you like that kind of thing. They are a thousand miles removed away from the traditional style of the tradition-bearer informants.

The attributions from the ms27 piano arrangement and the 1840 print point us to Mr. Sloane, either in Armagh or in Belfast, in 1799. His name appears on the loose sheet, and so I suppose it is possible that he wrote down his version of the tune and sent it to Bunting. (Though I would have thought that if this were the case, he would sign the sheet, not just the tune? And who signs their own name “Mr…..”?)

However, the 1840 piano arrangement doesn’t literally follow the Sloane loose sheet. In general, when Bunting writes an attribution in the late 1830s or early 1840s, I really wonder if he is being vague or forgetful or just making things up.

In any case, if the Sloane sheet really dates from 1799, it wouldn’t have been able to have have informed the 1798 Ancient and Modern piano arrangement. That must derive from one or both of the MS4.29 notations. And perhaps that is the significance of its Byrne attribution tag. But of course it doesn’t tell us which of the two notations in MS4.29 may have been transcribed live from the playing or singing of Charles Byrne. I suppose all I can say with confidence just now is that Bunting believed that the harper and singer Charles Byrne had given him a version of this tune.

Was Byrne singing a song about the Rambling boy? If so what might the words have been?

Also, who is Mr Stewart?