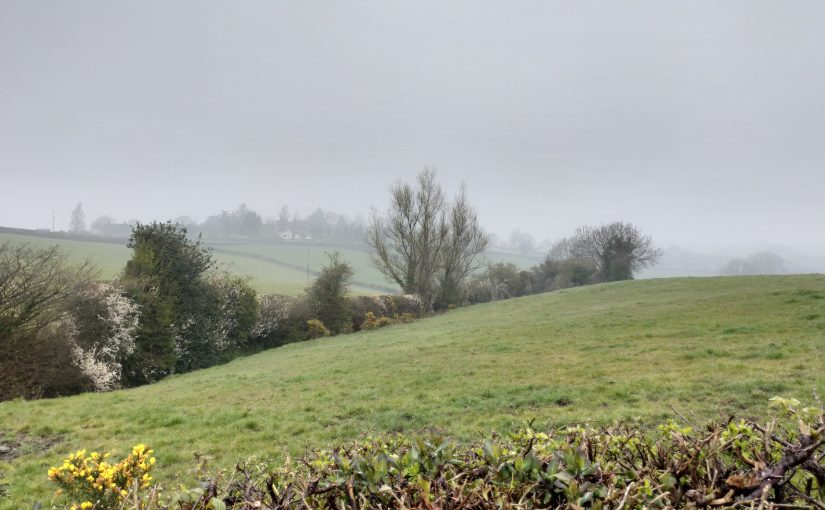 Some time in the 1790s, Edward Bunting made what looks like a live transcription of the tune of True love is a tormenting pain, from the playing of the elderly Irish harper and tradition-bearer, Denis O’Hampsey.

In this post we will look briefly at the live transcription notation, to see what it can tell us about traditional Irish harp performance style and idiom.

Bunting has written this tune onto a fresh page of one of his collecting pamphlets. At the top of the page he gives us two different English-language titles, “the showers of rain or true Love / is a tormenting pain”. Then he writes the music notation, in at least two separate layers of writing that are partly overlapping. Then underneath the music notation he has written a cartouche in a darker ink (presumably done later), which says “Hempson says / This is a Scotch tune”. And finally, at the bottom of the page, is some of his enigmatic doodling, which says “Shaw William”.

I have made two machine audios and two PDFs, to try and show the two layers of writing.

I think that the first layer was just the live dots written at speed as O’Hampsey played. Presumably these dots are now concealed on the first line underneath Bunting’s over-writing, perhaps as far as the double bar line. Then on the second line we see the naked dots, with just a + mark for some embellishment or other. My first PDF and mp3 only shows the second line of dots.

Things I notice that may possibly reflect or derive from O’Hampsey’s playing style, are the octave in bar 2 of the second half, and the letter B under bar 7 of the second half. But I also notice a number of octave leaps in Bunting’s notation of the tune. I wonder whether these are all indications of register shifts or swaps in the way O’Hampsey is handling the tune on the harp.

Bunting made some piano arrangements, apparently based on this live transcription notation. As usual, I don’t think the piano arrangements are useful at all for telling us anything about old Irish harp traditional performance style or idiom. I think all they can tell us is confirming a collation between tune form, title, and attribution. And even those things need to be treated with caution because I think Bunting may well have either invented or mis-remembered this information over the years.

The first piano arrangement was done only a few years after the collecting session. It is in Bunting’s unpublished Ancient and Modern piano manuscript from 1798, QUB SC MS4.33.2 p64. Bunting’s title there is “Showers of Rain or true love’s a tormenting pain” and at the bottom he writes in a curly bracket “from poor old Dennis – – – who says its a / Scotch Tune – – – ”

Decades later, in the late 1830s, Bunting returned to this tune and made a new piano arrangement which is in the pair of big piano albums which I think were being prepared for publication by his editors. I have’t seen either of these pages and I am relying on Colette Moloney’s Introduction and catalogue for these. In QUB SC MS4.13 p.93 the tune is tagged as being “from Hempson in Magilligan in 1796”, and attributed to “William Conalon the Harper about 1670”. In MS4.27 p62 it says “Supposed by Hempson to be one of W. Conlans tunes and called the Golden Star. Taken from Hempson at Belfast in 1792”.

Bunting finally published a piano arrangement as no.60 on p.44 of his 1840 book. The title there is “Love’s a tormenting pain / W. Connallon 1670”. An Irish title is given in the index p.iv, “is galar cráite an grádh / Is galarcraiohte an gradh / Love’s a tormenting pain”. The attribution in the index p.ix is “Hempson at Magilligan 1796”. I note that this is the first appearance of an Irish language title for this tune, and I wonder if this Irish title has been back-translated by one of Bunting’s editors in the late 1830s from the English title. We don’t seem to have an early version of this title in Irish from the dictation of O’Hampsey or any other tradition-bearer.

I don’t think we need to worry about these mismatched attributions. Bunting’s filing system seems to have been very disorganised and his memory a bit poor, so we can excuse him not remembering much about exactly which tune came from which informant in which year over 40 years previously. I also don’t know about the Conellan attribution. Thomas Connellan was made a Burgess of the City of Edinburgh in c. 1717, and is credited with the tune the Jointure or the Golden Star. Thomas and William are often mixed up, but I think Bunting might also be mixed up here. The most solid attribution information is what Bunting has written on the live transcription page: “Hempson says / This is a Scotch tune”, which may be from O’Hampsey’s dictation; though it looks like it was written onto the page later than the transcription session.

Mícheál Ó Súilleabháin, in an addition to Donal O’Sullivan’s Bunting (1983) mentions two other traditional versions of this tune in 19th century collections. I am not sure how closely related these variants are to our tune. To me they seem to be much closer to the tune for Oran do MhacLeòid Dhùn Bheagain (see Matheson, The Blind Harper p.58-73, p.160-2). This song was composed by Ruaidhrí Dall Mac Mhuirich (Rory Dall Morrison) after the death of Iain Breac MacLeod in 1693. You can listen to Flora MacNiven singing it in 1970. It seems that perhaps all these are part of a much wider tune family.

Ó Súilleabháin also mentions the Goodman manuscripts, Ms3. 87 titled “Is claoite ‘n galar an grádh” which is another variant of the same tune.