The next Cathedral recital is tomorrow, Tuesday 5th July, at 12.45pm

Medieval battle music in the ruins of St Andrews Cathedral.

The programme will be centred around the grand formal ceremonial tune, ‘The Battle of Harlaw’, celebrating the bloody fighting in Aberdeenshire six hundred years ago this month, in July 1411. Other highlights of the programme will be ‘Hei Tuti Teti’, reputedly Robert the Bruce’s march, and later used by Robert Burns for his song ‘Scots Wha Hae’. I will also recite some verses from the Gododdin, “Scotland’s oldest poem”, which describes the defeat of the men of Edinburgh in a battle in around 600AD – over one thousand four hundred years ago.

This event is part of my summer series of medieval harp concerts in the cathedral. Performed in the Priors House, a medieval vaulted chamber set within the ruins of the Cathedral in St Andrews, this series brings to life different aspects of ancient and historical Scottish music.

The last concert, in June, focussed on medieval church music and included pieces from the ‘St Andrews Music Book’ – a medieval manuscript compiled and written in St Andrews in the 13th century, which is now preserved in a library in Germany. For August, I will play grand Gaelic laments, weeping for the fallen and commemorating great chieftains and warriors. But this next recital on 5th July will draw together tunes from very disparate sources to paint a picture of the ceremonial and martial music of court and castle in medieval Scotland.

The harp I use is a unique replica of the clarsach of Mary Queen of Scots. The 500-year-old original is preserved in a glass case in the National Museum of Scotland in Edinburgh. I commissioned my replica from Irish harp maker Davy Patton in 2006-7. With its amazing soundbox carved out of a single huge willow log, and its intricate carved and painted decoration, the replica harp is a precious medieval art object that fits very well into the ancient ambience of the cathedral.

Admission is free. Tickets can be reserved in advance by calling the Cathedral visitor centre on 01334 472563. 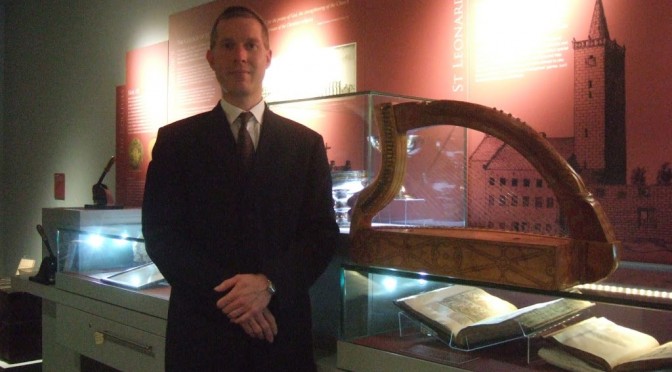 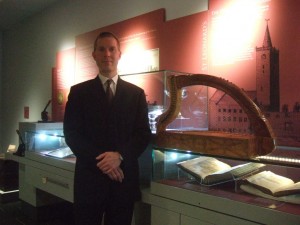 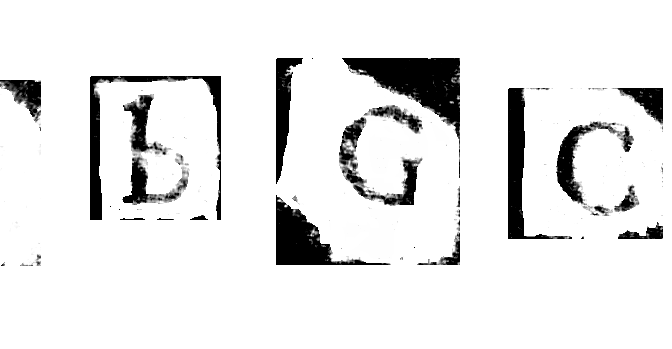 Recently I wrote a new page on earlygaelicharp.info, about possible inscriptions on the Queen Mary harp. As part of this I reviewed my photographs of the labels glued on the harp labelling some of the strings, and then I had the idea of photoshopping and cleaning up the photos, scaling them, printing them out and glueing them onto my replica in the appropriate positions.

For those of you with a Queen Mary replica who want to join in the fun, here is the image I ended up with. Print it out at 486dpi onto good old fashioned white or off-white laid paper, cut out along the black edges, and stick on using flour and water paste. The numbers go on the right hand side* of the string band (so they are visible for a left orientation player), and they are upside-down when the harp is in playing position, so the player can read the letters. They go in order, counting from the treble: 1 [illegible], 8 [c], 9 [b], 11 [G], 15 [C], 22 [C].

Any problems or questions let me know! If you send in a photo of your harp with the labels stuck on, I will feature it here!

*Right and left hand side of the harp are described as from the viewpoint of the player, not of an onlooker