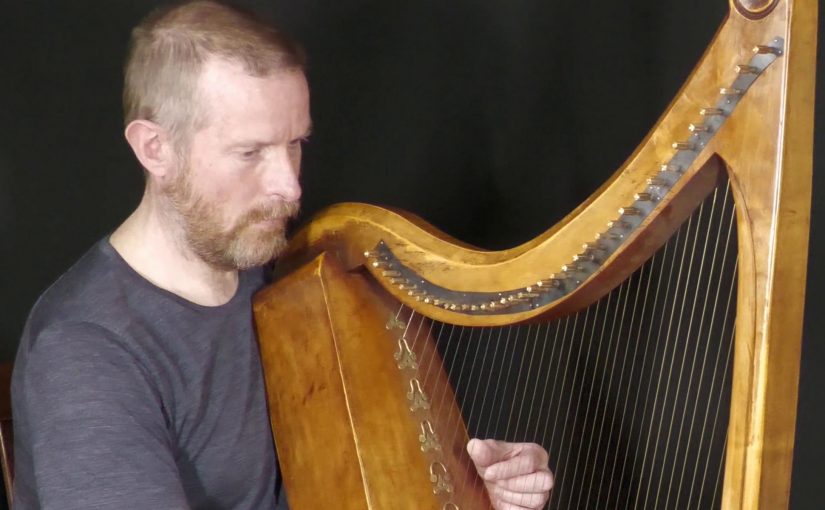 The old Irish harp traditions came to an end in the early years of the 20th century. The last of the tradition-bearers died in poverty, ignored and un-noticed.

From the late 19th century, instead of engaging with the tradition-bearers, middle-class enthusiasts in the Gaelic revival movement turned to the Anglo-Continental classical harp tradition. They invented a new, modern Irish harp tradition which thrives today, based on using classical harp technology of gut strings with key-changing mechanisms. They played tunes with chordal accompaniment, with the right hand in the treble and the left hand in the bass: completely back-to-front from the tradition-bearers’ point of view!

In contrast, I am working on the traditional, pre-revival, style of playing. My aim is to study and understand the last of the old tradition bearers from the 1790s through to the early 1900s, to try and re-connect to their tradition as it was before the direct lineage of master to student came to an end a bit over 100 years ago.

Those old harpers played the harp in the old Irish harp tradition, inheriting their playing techniques and music back through generations of harpers. They were taught orally, without using written music notation. Their music was closely connected to traditional Irish song, fiddle and pipe music. Their harps were the big floor-standing wire-strung Irish harps, with 30 or more brass or iron wire strings. Some of the harps played by these last generations of old Irish harpers are still preserved in museums. Their playing techniques and their repertory were written down in the 1790s and early 1800s by the music collector, Edward Bunting.

For my own music, I use copies of their harps, made by specialist historical harpmakers and based on museum research into the originals. I string these copies using brass wire strings, following the traditional stringing and tuning systems. I play these copies using the traditional Irish harp playing techniques, following the work of Sylvia Crawford. I play traditional Irish harp repertory, sourced from my own musicological research into Edward Bunting’s live transcription manuscripts, and from listening to Irish traditional musicians and singers in the living tradition and in archive recordings. I am living in Armagh, which is in the midst of where some of the most important tradition-bearers were from.