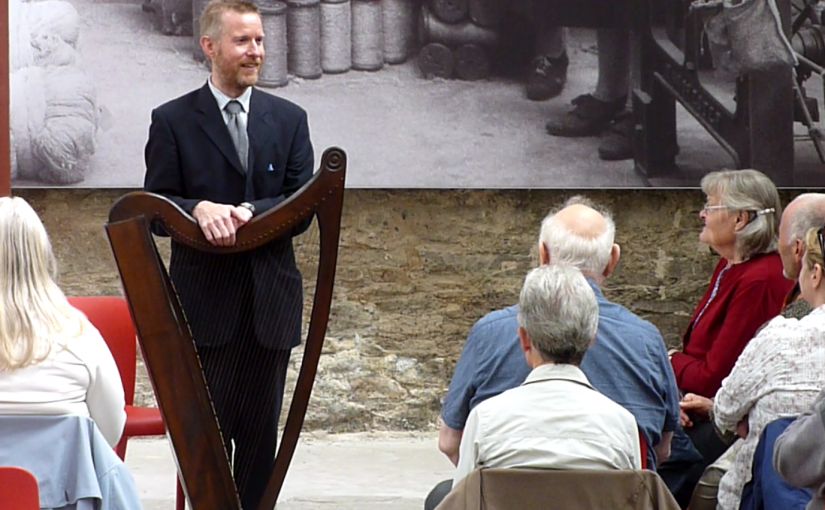 From about 2007 through to 2017, I performed using the replica of the medieval Scottish “Queen Mary” harp that was made for me by Davy Patton. I took the replica Queen Mary harp to historic buildings, community spaces and concert halls, playing reconstructed or re-imagined medieval and Renaissance Scottish Gaelic harp music. I took the harp to the Isle of Skye to accompany singer Gillebrìde MacMillan in a private recital of 14th century bardic praise poetry for the chiefs of Clan Donald; I took the harp to the British Museum in London to play for Members during the “Celts” exhibition; I played the replica for a series of demonstration events beside the original medieval harp in its glass case in the National Museum of Scotland, and I also took the replica harp to the Museum to perform improvised accompaniments for childrens’ storytelling. I played Renaissance Scottish music in the Netherbow to accompany a reading by poet Henry Marsh. I gave solo concert performances of my re-imagined medieval Scottish harp music at the Dinan harp festival in France, at Scoil na gCláirseach in Ireland, at the International Medieval Congress in England, and at small and curious venues across Scotland from Acharacle to Anstruther.

But from about 2017 I pretty much stopped doing this; I basically lost interest in the historical recreationism of medieval music, and turned in a different direction.

I was invited to perform at the bicentenary 1817 “Nathaniel Gow’s Dance Band Concert” in Edinburgh at the beginning of 2017, and this connection to the old tradition 200 years ago inspired me and made me think very differently about the traditional Irish harp music. I started using the big 18th century style Irish harps, eventually commissioning a new harp from Pedro Ferreira in 2019, a copy of the “Carolan” harp owned by the National Museum of Ireland. I have played concerts of Carolan’s music, of traditional Scottish music, and of traditional old harp tunes. In the autumn of 2019 I took the brand new harp for its first public outing to the Linen Hall Library in Belfast, where I played a set of traditional Irish harp tunes for the bicentenary of the Irish Harp Society (1819).

And then when I thought I had got it, my horizons took a whole new leap forward in 2022 with my focus shifting to the 19th century harpers. I am in the process of getting a 19th century style wire-strung Irish harp. Maybe by next year my playing and my approach will have solidified enough to start performing again!

Contact me if you want to discuss traditional Irish harp music for your event next year.