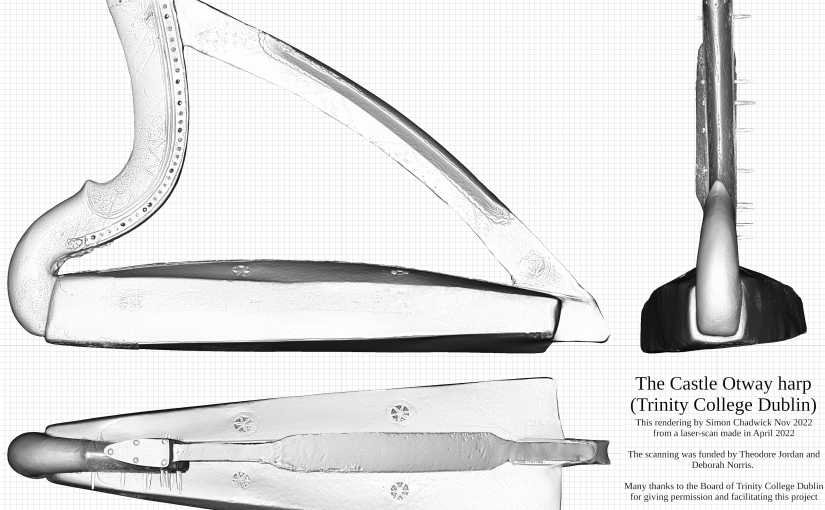 I have generated these plans from the laser-scan of the Castle Otway harp that was made in April 2022. The plans show the harp in its current distorted state, but they should be useful as a starting point for anyone who wishes to make a new copy of the harp.

The scanning was funded by Theodore Jordan and Deborah Norris. Many thanks to the Board of Trinity College Dublin for giving permission and facilitating this project.

The Castle Otway harp is an old Irish harp in the collections of Trinity College Dublin. On 7th April 2022 the harp was 3D scanned by Kevin De Burca of 3D Scanning Ireland for Simon Chadwick and Sylvia Crawford. This short video shows the actual scanning process. The entire scan took 2 1/2 hours and produced a whole load of small raw sections which had to be cleaned up and stitched together to make the completed scan.

Because the harp is varnished and is very glossy, there is a lot of noise and false surfaces on certain areas of the harp. There were also quite a few areas that the scanner could not image, especially the back and the base. Also the foot of the harp is embedded in a big 19th century mount. (The very end of the foot is visible in the base of the mount). On the scan, the smooth areas at the base and back of the harp are interpolated surfaces and do not represent the actual surface of the harp.

Also the scanner was unable to image the inscription which is carved into the inside lower end of the forepillar. You can see there is a smooth interpolated surface at that point of the scan.

You can download the scan for your own study, or to generate your own renderings of any part you need, or to use in your own projects.

I made these renderings using MeshLab, and I unrolled the curved surfaces using CloudCompare.

I am trying to organise these renderings so that they will be useful for harpmakers. I have made a general overview plans, and then I will do a series of separate orthogonal views and sections of each of the three main parts.

All the plans have a 1cm major grid on them. Close ups also have a 1mm minor grid. The dpi of each image varies because of how the renderings are generated from the scan.

Note that on the general overview plans, all the parts are at a slight angle because of the distortion of the whole harp. This is not intended as a template for a new harp. Everything needs straightened up first.

For the neck, I have made three sets of renderings. The first is an overall set of orthogonal views. It is aligned with the metal cheek bands flat so you can use these views to lay them out. Note the big cracks in the treble end of the neck, these should be closed when laying out a copy.

The second is a set of cross-sections, viewed from the treble. Each cross section goes through one of the 34 tuning pin positions, and runs perpendicular to the line of pins at that point. There is also a section perpendicular to the neck-soundbox joint at the very edge of that joint. I have put the 35 PNG images into a zip archive for you to download.

The third is the sheet brass end cap. I virtually separated the two brass sheets, and virtually unrolled the edge strip.

For the forepillar, I have made three sets of renderings, all based on the same alignment. The pillar is not square, I don’t know if it has twisted or if it was always wonky from new. I tried to line up the sides to be flat which means the front face is a bit tilted. The first set is an overall set of orthogonal views. All of my pillar diagrams show the top of the forepillar to the left.

I also made five cross-sections of the forepillar. There is a little key diagram with them showing where each was made. The sections are viewed from the top of the pillar.

And finally I virtually straightened or flattened out the front face of the forepillar.

For the soundbox, I have made three sets of renderings. The first is an overall set of orthogonal views, with the soundbox aligned so that the base end is level.

The soundbox is carved from a single piece of wood. There is a modern plywood back panel permanently fixed into the original stepped recess in the back. There is a very useful drawing published by Robert Bruce Armstrong in 1904 which shows the back and inside of the one-piece soundbox with the back panel removed. It is very likely that the interior is hollowed out right to the very top so that the treble neck mortice connects through to the soundbox interior.

You can see the join between the original soundbox wood and the modern plywood back panel in the back view on the scan. You can also see that there is a twist along the length of the soundbox (caused by splits and string tension) so that the treble end is twisted to the right. There is a split right down the centre line of string holes especially in the treble and so the soundboard has pulled up a lot under string tension, and the sides have collapsed inwards. All this needs corrected for in a new copy. You can use the curve of the sides and of the solid top and bottom blocks as a guide for how much arching there may originally have been on the entire front. I also think there is heavy wear on some of the corners where the player rested on the harp.

You can also see that the scan has missed the entire bottom back edge of the soundbox, and the interpolated bottom back edge is not in the right place. I assume that the lower ends of the box sides should be approximately square rather than at the angle shown on the scan.

The foot should also probably be rectangular rather than cut away at the front. However I believe it does have a curved termination which I think has been captured in the curved surface at the very end of the foot on the scan.

The second is a set of parallel cross-sections, viewed from the treble. Again these use the exact same orientation of the soundbox as the orthogonal views. There is a cross-section right at the extreme top just where the neck touches the front; then there are 36 cross-sections, one for each of the holes in the brass strip, numbered 0 for the half-hole right at the top, to 35 for the lowest metal hole which is hardly visible on the scan. Finally there is one cross-section taken where the forepillar touches the front of the soundbox, and another towards the bass end just before the interpolated rear corners vanish.

This image shows all 39 section lines superimposed. I have also made a ZIP file for you to download containing 39 separate PNG images.

The third vital piece of data is my reconstruction of the original string hole positions. The metal strip is only original for the lowest 14 positions. Above this the strip is a modern replacement, put on after Armstrong’s photographs published 1904. I wrote a blog post about this back in 2018. Back then I used photos and measurements to try and calculate a suggested original string spacing, based on the average spacing of the lowest 14 holes, which also lined up with the traces of fixing nails visible underneath the edges of the replacement strip (not visible on the scan). Now I have done the same averaging and calculations to make a new reconstruction. This image shows a flattened unrolled rendering of the scan, overlaid with the average spacing of the lowest 14 positions (shaded darker) extended to give all 34 positions equally spaced. Treble to the left, bass to the right.

Note that there is a mismatch in the number of holes, there are 35½ metal holes but probably only 34 wood holes. Be very clear what numbering system you are using! I used to count metal holes starting with 0 for the half-hole at the top and 1 for the first real metal hole. This gives 35 metal holes. But there should probably be only 34 original wood holes. So the metal holes and wood holes which properly match (the lowest 14) have ambiguous or contradictory numbers.

It’s my understanding that the design of the Castle Otway harp is public domain, since the object is over 200 years old and has been displayed publicly on and off for much of that time.

The whole point of this project is to put the best data about this historical object as possible into the public domain, to allow researchers, scholars and harpmakers free access to the plans to use to make better and more accurate copies.

I have marked my plans cc-by because I think there should be no restriction on their re-use but it is nice if people give credit and cite their sources. I think the best citation or credit would be to mention everyone who has been involved in this project: