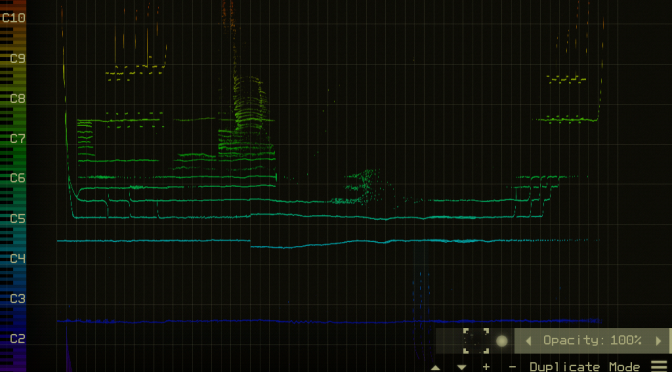 I have not been playing the harp because I have been working on the virtual ANS instead. For my very first experiment (which I put here the other day) I did everything on-screen , sampling the sound of the harp and distorting it rather crudely into a drone and some chime-like sounds.

But one of the things that attracted me to this instrument in the first place was the idea of tactile, hands-on shaping of the sonorities. I have never really been happy drawing or painting on-screen, usually preferring to work on paper and then scan in the image if I do want to create a visual artwork. So I have been experimenting with drawing the spectra on paper and scanning them in to use on the virtual ANS.

This one is a short sketch of a few ideas, which may or may not be developed in future into a proper piece of music. I drew it on squared paper with a green pencil, which wasn’t technically a very good choice!

It’s only 31 seconds long! But there are a few things in there I am thinking of developing in a future work. Ealasaid said it seems like a description of a forest.

Today’s work is a finished composition called “why”. I drew it freehand on five sheets of A4 paper with a fine draughting pen, using a printed grid as an underlay to guide the pitches. I stitched the five scans together, and adjusted the edges, on the big computer, and I also did a few adjustments in the ANS software too. I am pretty pleased with this one. It’s 3 minutes 55 seconds.

It’s also interesting to realise that this kind of music-making, directly sculpting sonorities out of pure tones, produces a completely non-harmonic kind of music. You can have melodies of course; I will think more about how to develop suitable melodic idioms for this machine. But because there are no harmonics in the sounds produced, there is no sense of consonance or dissonance in the music. I have read before about the theories of how dissonance and consonance arise in the ear and in the mind but it is another thing to see and hear it happeninng as you work. In “why”, I have created harmonic chords and drones, but I also have deliberately bent them into non-harmonic shapes, and introduced other non-harmonic noises.

Also because of this I think, it makes much more of a difference what equipment you listen to this stuff on. I have been working using the big headphones – because the sounds are non-harmonic, you don’t get the audio illusion that you do when you listen to normal harmonic music on a limited-bandwidth device (like small, cheap speakers!) – normally I dont mind listening to short clips on the laptop speakers, accepting the distortion in the sound in the same way I accept the distortion of speaking on the telephone, or listening to a gramophone record. But this pure tone music does not “compress” in the same way. Interesting stuff!