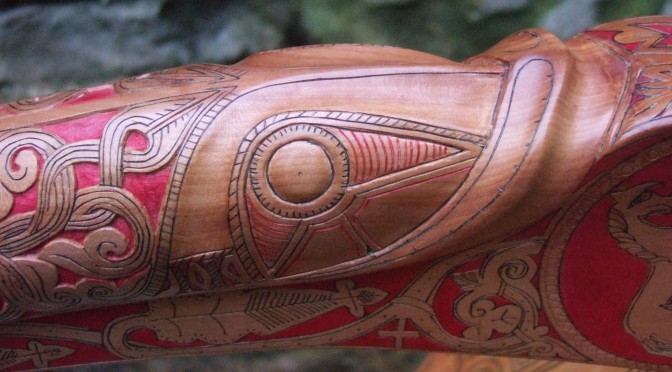 I often hear the opinion that decoration on a new harp is a kind of decadent luxury, unnecessary,  a bit of an affectation. And when decoration is applied to a replica harp, it is often somewhat simplified, or sketchy, or partial.

I have been re-reading Peter Wells, How ancient Europeans saw the world (Princeton 2012) and I realised that there is more to surface decoration than that.

Wells discusses the way in which our experience of the visual world is shaped by the kinds of things we look at, in subtle and complex ways. The idea that what we see now is highly conditioned by what we have seen in the past, that our perception of an object is a very complex and subtle mental process, building on layers of experience and expectation to filter and categorise the external stimulus from eyes and visual system.

At a simple level there is the realisation that the harps we look at normalise themselves as to what we expect a harp to look like, and the way our brain subconsciously categorises harps as a class of physical object. This has the clear implication that the way we react upon looking at a new replica harp is very contingent on what other harps we have looked at before. Someone who has spent a lot of time looking at the antique harps in museums will have a very different subconscious filter and processing than someone who instead has looked mostly at simplified, undecorated ‘student’ instruments.

But I think it goes further than just that. The harps are the bedrock of our musical art, in that our music is physically rooted in the actual instrument we use to play it. We can’t pretend to be neutral or unaffected by these subconscious classifications, filterings and models of the physical object that our visual experiences have thrown up. A plain ‘student’ harp with its clean Shaker aesthetic and carefully presented natural-looking wood grain is going to build different neural models of its nature and being, than an elaborately lined and coloured decorated replica. When we imagine the sounds that we could or should coax from such an object, I don’t believe we can dissociate our acoustical thinking from these visually-instilled conceptual frameworks.

What then of blind people? Wells doesn’t discuss blindness in his book, which I would think would be an interesting test-case for the theories he puts forwards. In ways like this, Wells’s book is a lot less scientific and comprehensive than Ian Morley’s Prehistory of Music (OUP 2013) which comprehensively analyses the physiological and physical basis of human auditory perception and cognition. I would be interested to find out more about the ways that blind people experience and conceptualise the world of physical objects around them, in the same way that Wells attempts to do for sighted people. Wells does mention the connections between sight and touch in the visual development of infants, but this could be greatly expanded along Morley’s lines.

In conclusion, decoration on a replica harp is in no way a secondary add-on; it is an essential part of the physical presence of the object, as vital to our understanding of its musical potential as the soundboard profile or string material. The decoration should be applied with the same attention to subtle quality and complexity as any other aspect of the instrument. Otherwise we are missing out on an important part of the ancient sensory experience.