Sometimes at St Salvators tower we are short-handed, and we have been gradually working our way though The Chris Higgins Guide To Three-Bell Ringing (ed. Ian Chandler, Kirby Manor Press 2003). I have been enjoying the elegant simplicity of the music as well as the physical challenge of placing and striking the bell well.

Today, being the first day of semester at the University of St Andrews, and also the morning of the clocks changing, there were only two of us. There are two two-bell methods in the book, and we tried them both – Cambridge being a little more pleasant, with more intellectual challenge as well as less physical. But then I fancied something different and so invented on the spot some stedman-style methods which I see now loking though my notes also share some charateristics of the ultimate 3-bell method, Shipping Forecast.

The idea is to lie, point and lie. You can lie for 2 or 3 blows, and you can arrange the blocks of 2 and 3 lying adjacent or alternating.

We rang the three and the five, the University’s two medieval bells, whose minor 3rd interval was to me the characteristic sound of the tower before the augmentation in 2010.

I wonder if it would be possible to make a connection with the binary music of Robert ap Huw and the other late medieval / early modern Welsh secular instrumentalists? Was this most fundamental art of change ringing used before changes on higher numbers were developed?

Finally we discussed a little what to call this type of ringing. The book unimaginatively describes these methods using just the word “two”. We can do better than that. The convention for odd numbers of bells is to count the number of simultaneous changes possible, so on 3 is singles, 5 is doubles, 7 is triples, and so on. On even numbers, Latin descriptors are used: 4 is minimus, 6 is minor, 8 is major, &c. I proposed “micromus” but I don’t know if that is too silly! 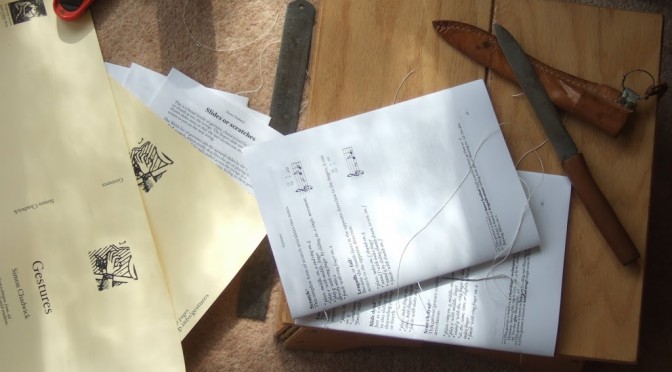 Today I sent out an announcement of the availability of my new book, “Gestures”. You can find out more here: www.earlygaelicharp.info/gestures

I considered many different options for publishing this book, including approaching another publisher, though I prefer to publish in house through earlygaelicharp.info. Normally, one would use a commercial printing company to make and bind the books, but a conventional printers needs a run of 1000 to make economic sense – the setup costs are high in relation to the cost per unit. I was not sure this made sense for such a niche specialist publication.

I also considered using a print-on-demand company. These will print and bind one copy at a time for you – Lulu is perhaps the best known, though there are others who focus more on the needs of small publishers. However a big problem with these is the cost of shipping the printed books from the company; what you gain in flexibility of being able to order small numbers, you lose in the economy of scale for delivery.

In the end I have decided to keep this book entirely in-house, and it is being published as a hand-made book. Below you will see a photo of the first batch being assembled in my workshop. The big advantage of this method is that it gives me complete control over the design of the binding – in this case it is traditionally hand-sewn to make sure that the book will easily open completely flat – an important consideration for a music book, that will be placed on a music stand.

Anyway, I enjoy bookbinding as much as book design and writing! 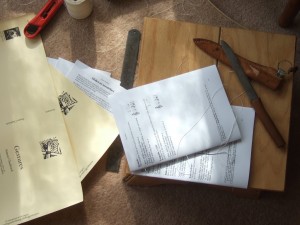 Just been eating fresh local strawberries from the farmers market, while listening to Bill Taylor’s performance of Caniad Tro Tant from his new CD, Musica. A nice idea of his in the liner notes! 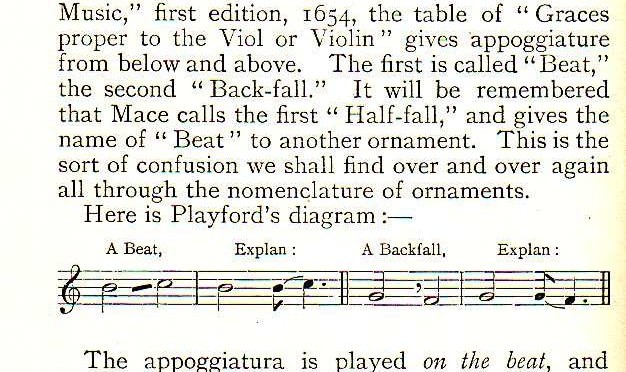 One question that regularly comes up is how one deals with grace notes and ornaments. In the Gaelic harp tradition we have the system of left hand gestures published by Edward Bunting in 1840 (online edition), and in the Welsh harp tradition we have the ‘alphabet to learn the pricking’ on p.35 of the Robert ap Huw manuscript (online facsimile). These describe series of notes that are played as a single fluid connected motion, and which are often treated as ‘grace notes’ preceeding a ‘principal note’.

Two questions immediately arise; how quickly to play them, and whether the accent and stress should lie at the start of the sequence, with the principal note displaced, or whether the ‘grace notes’ should be played before the beat.

Arnold Dolmetsch, in his book The Interpretation of Music of the 17th and 18th centuries, gives copious quotations and discussion from historical treatises, on different kinds of ornamentation. Here is an extract from page 96: 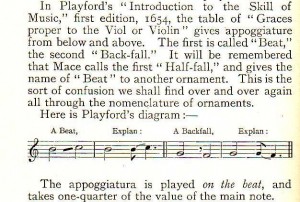 The time taken in playing gracenotes is not counted when reckoning note values in a bar. They are supposed to take time from the note immediately following.

To my mind and ear, these clusters of notes have a consonantal, rhetorical function, creating a crunch of dissonance on the beat or pulse which resolves a moment later into the sustaining melody note. Playing these auxiliary notes before the beat completely removes this dissonant, consonantal sound, and replaces it with an effectively un-ornamented music filled with dance-like upbeats.