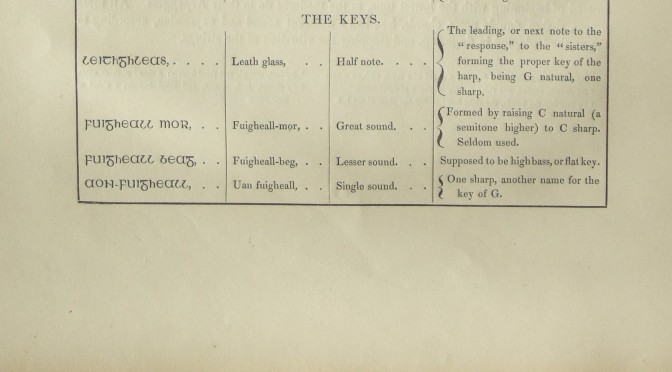 In discussion with Siobhán Armstrong the other day, she challenged me to set out my ideas on how we can use modes to categorise or understand the old Gaelic harp music. Here is the scheme that I think I have been gradually bringing together for a while.

Discussion of modes nowadays is usually based on the idea of a seven-note scale, which can generate seven “modes” i.e. octave species, by starting in turn on a different note of the seven. These seven modes have pseudo-ancient Greek names. To deal with traditional tunes using less than seven notes in an octave, there is the idea of “gaps” in the scale, but this is rarely articulated and tabulated coherently.

I have started instead with pentatonic (5-note)  scales, inspired by discussion during a workshop on pentatonic scales led by Andrew Lawrence-King at Scoil na gCláirseach a few years ago. I then add optional or weak semitones into the pentatonic scales to generate the 6- and 7-note scales.

I am deliberately trying to avoid using the Greek names. The only names I have so far are for the three top-level families: major, minor, and neutral. I was tempted to follow Alasdair Codona and use masculine, feminine and neuter, but I am not quite ready for this yet. Do you think the familiarity of major and minor helps, or hinders, given that they have subtly different meanings in my scheme to in mainstream common-practice harmonic music?

A Gaelic harp has the following pitches available:

except of course you can’t have both F and F# together as one string is turned up or down to get either note. But these 8 pitches allow you to transpose any pentatonic scale into four different positions on the harp. For example, the major pentatonic scale can be transposed into the following four positions:

I would consider the first two “normal” and the second two “unusual”, and you will see that the “normal” ones avoid the retunable string, i.e. the notes F and F#, while the “unusual” ones include it.

So we have three species (major, minor, neutral), each of which has four transpositions. Now we can generate the complete chart of modes, by adding in the strings that we skip over when we play the pentatonic scales:

You can see that in neutral modes, the 3rd and the 6th can either of them be sharp or flat, and present, weak or absent.

You can also see that there is some redundency, as each of the neutral scales “matches” one of the major or minor scales. But I think this is not right: the relative strengths and weaknesses of the pitches are vitally important in understanding the old Gaelic harp music and related music traditions. Barnaby Brown put forward three questions: “How many pitches are there? Which pitches are used? Which pitches are strong or weak?”. It is the essence of modes (as opposed to scales, or octave species), that they have within them indications of relative importance of pitches, i.e. pitch hierarchies.

What is missing from my scheme? It says nothing about range, or ambitus; which is the highest note and which is the lowest note, and what is the interval between them? There is an idea from medieval mode theory of an “authentic” mode, with a range an octave up from the home note, and a “plagal” mode, with a range from a 4th below to a 4th above the home note.  Alasdair Codona points out many Gaelic songs use a range from a 6th below to a 3rd above the home note. Many tunes have smaller rages, and many have bigger ranges of up to 2 octaves.

My scheme also does not have much to say about home and away sonorities, or drones, and the interesting question about the relationship between the implicit drone note of the instrument (on the harp, na comhluighe), and the home note of the tune, and the drone note actually sounded by the player.My scheme does not really tell us how to name these different modes. I think I still prefer a more ad-hoc naming system, so I might say “this tune is G major with F natural”, “this tune is D neutral with passing f natural”, “this tune is A minor pentatonic”.

My scheme does not mention harmonic scales. I think a harmonic series (such as the scale of a trumpet tune) would most likely match with my major modes but I really don’t know. I need to look again at the old Scottish and Irish tunes that have a trumpet-esque scale, to see how they might fit in to or modify my harp-based scheme.

And finally, I don’t know whether my scheme really accomodates significant parts of the repertory. To test that would need an exhaustive survey of many hundreds of tunes. But I think it gives a good impression of the contours of the subject. It overlaps substantially with the far more complex and dense scheme proposed by Alasdair Codona, and does not seem wildly inconsistent with the broad layout of the pibroch bagpipe repertory presented by Barnaby Brown.

One thing that my scheme does not really do very well, is what Siobhán was using her scheme for – to transpose an old harp tune out of its published printed arrangement with four flats, to discover its original position on the harp gamut. But I would use transposition tools rather than modal analysis to solve that problem!

My image for this post is from p.28 of Edward Bunting’s Ancient Music of Ireland, 1840. The spellings, translations and explanations for these four terms seem very garbled, but I wonder if it is too much to run with Alasdair Codona’s speculation, and see fuigheall mor as the major modes, fuigheall beag as the minor modes, and aon fuigheall as the neutral modes? Perhaps…

One thought on “Modes”