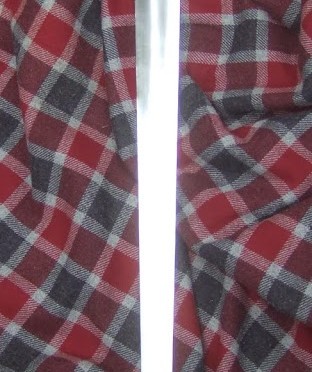 I have a new sword, which I acquired secondhand. It was made in Czechoslovakia by Nielo – there seems to be a number of very good bladesmith craftsmen in Eastern Europe. It is nicely made and seems a quality piece of work. Though it is over 10 years since I last did any historical fencing this seems a very good sword.

I have been looking for a long time for a sword of this type. The drooping quillons with broad ends are the really distinctive thing here and these differentiate this “Scottish style”, and they are what develop to give the classic “claymore” or “twa-handit sword” of the 15th to 17th century.

The West Highland grave slabs, such as the ones at Keills, show similar swords but with viking style lobed pommels. Was there a real difference between the designs of the West and the East in the 14th and 15th century? Or were the late medieval West coast stone carvers deliberately showing an archaic design? I don’t think there are any extant examples of the lobed-pommel type whereas there are a number of this wheel-pommel type surviving. Here is an excellent example in Kelvingrove museum, Glasgow.

I could have done with this in 2011, when I ran my Battle of Harlaw music workshops. We spent part of one of the sessions looking at the effigy of Gilbert de Greenlaw, and discussing his arms and armour. He is carrying exactly this kind of sword – again in an East coast context. We also looked at some of the West highland effigies.

The sword does not have a scabbard, so making one is my next project. I need to look at more of the effigies and stone slabs to get a better idea of how they work.