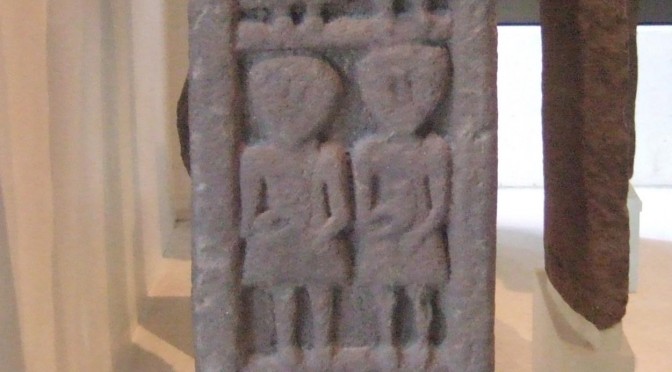 First, three men from Pictland, i.e. the East of Scotland, are described:

‘I saw another room there, with a huge trio in it:
three brown, big men:
three round heads of hair on them, even, equally long at nape and forehead.
Three short black cowls about them reaching to their elbows: long hoods were on the cowls.
Three black, huge swords they had,
and three black shields they bore,
with three dark broad-green javelins above them. Thick as the spit of a caldron was the shaft of each…’

‘Hard it is for me to find their like.
I know not in Erin that trio,
unless it be that trio from Pictland, who went into exile from their country, and are now in Conaire’s household.
These are their names:
Dublonges son of Trebúat,
and Trebúat son of Húa-Lonsce,
and Curnach son of Húa Fáich.
The three who are best in Pictland at taking arms are that trio.

A little later,  there is a description of three Anglo-Saxon princes:

‘On the northern side of the house I beheld nine men.
Nine very yellow heads of hair were on them.
Nine shirts somewhat short were round them:
nine purple plaids over them without brooches therein.
Nine broad spears,
nine red curved shields above them.’

I was interested in the descriptions of the individuals’ clothing and accoutrements. This section of the story is a long and detailed description of the physical appearance of each nobleman in the Royal party in turn, mentioning their shirts, cloaks, brooches, weapons, hair, etc.

I am not very happy with any of the translations I have seen though! The different technical words for the garments is very hard to work out. The Pictish men wear short black capes or cloaks, reaching down only to their elbows, with long hoods. We are not told what they wear under their cloaks. The English men each wears a short tunic, and a purple cloak without a brooch. This is interesting because almost everyone else described has a brooch or pin on their cloak. Is this a distinctively English thing, to not pin a cloak but just throw it over your shoulders? And is it a distinctively Pictish thing, to wear a short cape with a hood (perhaps somewhat like the Orkney hood?)

I am imagining that we see here some kind of attempt on the part of the Irish storyteller, to caricature the distinctive appearance of foreign people at the Royal court. I wonder how much these caricatures reflect genuine clothing and appearance habits of the Picts and the English respectively?