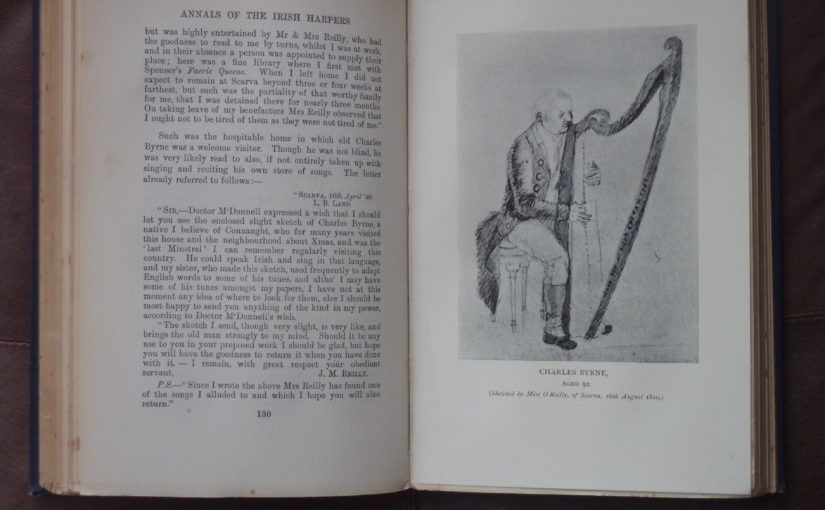 Charles Byrne is listed as one of the harpers who went to Belfast for the harpers’ meeting in July 1792. The collector, Edward Bunting, says:

…Charles Byrne, another Leitrim man, born about 1712, was one of those who attended the Belfast meeting. Although not distinguished as a performer, he possessed an extraordinary fund of songs and anecdotes, of which the Editor has availed himself to a considerable extent

I met a Charles Byrne who was taught by his uncle to be a Harper /
(I may be taugt thought too be severe when I made use of the word “Tol: Lol” /
in my account of the Irish Harpers. others may Say the same of myself). But /
the fellow not being blind, had many advantages over those who had not that first /
of Gifts, (Sight,) and as he had a tolerable memory, He could recount all /
that happened to him during the time he led his blind uncle thro’ the Kingdom. & /
I must conclude my Biography of him. &Set him down a _____ Tol: Lol: /
I Know myself besides what I am Credibly informed that he could and can Sing a good variety /
of real Irish Songs in a pleasing Stile with a pleasing Voice.

I met a Chas. /
Byrne who was taught by his uncle on the Harp, this /
man had many advantages not being blind, he was a good /
player. He had an excellent memory and could recount /
all the little incidents that happened to him during the /
time he led his blind uncle thro’ the Kingdom. I heard /
him sing a good many Irish songs in an agreeable stile /
and pleasing voice.

The two different versions of the Memoirs do not agree on the quality of Byrne’s playing!

William Carr, listing all the harpers who went to Belfast in 1792, tells us

Charlie O Byrn from Leitrim (played worst) He was originally but the servant to a harper and always carried his Masters Harp but he and he only took a fancy to learning as well as he cd, never well Educated for it

Edward Bunting collected tunes from Charles Byrne. As well as telling us the two tunes Byrne played in Belfast in 1792, Bunting tags a number of tunes in his manuscript and printed books with Byrne’s name, as well as in his annotated copies of his 1809 and 1797 publications.

In Edward Bunting’s papers there is a letter to Bunting from Reilly of Scarva:

Scarvagh 16 Apr ’40
L.Bland.
Sir,
Doctor M’Donnell expressed
a wish that I should let you
see the enclosed slight sketch
of Charles Byrn a native I believe
of Connaught who for many years
visited this house & the neighbourhood
about Xmas & was the “last Minstrel”
I can remember regularly
visiting this country – he could
speak Irish & sing in that
language, & my sister who made
this sketch used frequently to
adapt English words to some of
his tunes, & altho’ I may have

you will have the goodness
to return it when you have
done with it.
I remain with great
respect your obt
servant
JM Reilly
since I wrote the above Mrs
Reilly has found one of the
songs I alluded to, & which
I hope you will also return

This letter raises all kinds of questions, and seems to have been the starting point of a lot of guesswork and speculation about Byrne that I am starting to doubt. If we assume there was only one Charles Byrne harper around at the end of the 18th century, it seems likely that it was the same person.

Charlotte Milligan Fox published a transcribed text of the letter in her book Annals of the Irish harpers in 1911. She also published a portrait, which she said was the sketch done by J.M. Reilly’s sister.

When I went to Queens University Belfast to look at the letter (which I have made my own transcription of, above), I also hoped to see the sketch, but as far as I can tell it is not in the Bunting manuscripts (QUB Special Collections MS4). The letter is written on both sides of one piece of paper, about 22 x 18 cm, and has been folded six times to give a small package of about 11.5 x 6.5 cm. If the sketch was indeed included in the letter, it must either have been folded to a similar small size, or have been in total not much larger. It is not clear how big the original might have been from Milligan Fox’s reproduction.

We also might wonder about the rather pressing instruction in the letter, to return both of the enclosures, the sketch of Byrne and the “song” mentioned in the letter. Did Bunting not return the sketch and the song, and keep the letter? If he kept the sketch, did he also not keep the song?

What were the grounds that Charlotte Milligan Fox used to identify the sketch that she published? She says that the sketch was done on 16 Aug 1810, and that Byrne was then 92 years old. Where does that information come from? The age contradicts the information from tradition bearers mentioned above. Where is the published sketch now? Is it in Queen’s, uncatalogued and un-noticed? Or was it separated from the rest of the manuscripts before Fox passed them on to Queen’s? Did Milligan Fox jump too hastily to conclusions, finding the sketch in the box of papers, and finding a letter which refers to “the enclosed slight sketch”, and put two and two together to make twenty?

Milligan Fox points out that there is information from harper and tradition bearer, Patrick Byrne, that “Miss Reilly of Scarvagh is the only person whom he knows now living who was taught to play through the Irish language” (undated letter quoted in Milligan Fox p.136. I have not seen this letter). Is this “Miss Reilly of Scarvagh” the same person as “my sister” of J.M. Reilly who made the sketch of Charles Byrne posted to Bunting?

In 2012, Michael Billinge wrote a long and detailed article about the portrait published by Milligan Fox, saying that this portrait shows Charles Byrne playing the Mulaghmast harp. There is a whole lot more that could be said about similarities and differences between the harp in the sketch, and the Mulaghmast harp, but this post is only about Charles Byrne and so there is no space to go into that here. However, I do think that all these nested layers of assumption and connection need picked apart much more carefully before we can make any firm statements about any of this.

edit 23 July – Leitrim is in Connaught